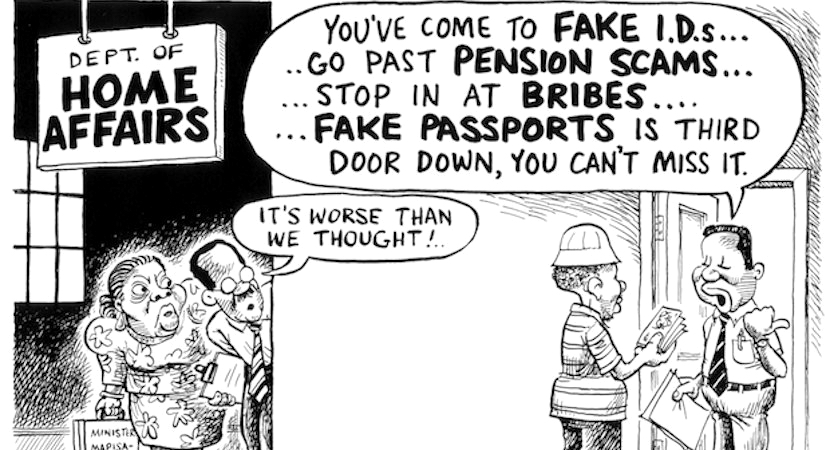 JOHANNESBURG — Civil society body OUTA has laid several charges against a range of high-profile politically connected people such as the Guptas, Faith Muthambi and Mosebenzi Zwane. However, their latest complaint and charge has been levelled against an immigration official turned alleged Gupta fixer. It appears the Guptas were given an easy ride by Gideon Christians, a home affairs official. The Guptas allegedly bribed Christians and in return received certain fast-track favours such as visas etc. Subsequently, OUTA has levelled charges against then home affairs minister, Gigaba, as well as Christians. The tentacles of state capture are clearly deeply entrenched and if a cleanup ever begins, it may take years. – Gareth van Zyl

The Organisation Undoing Tax Abuse (OUTA) has laid charges of corruption and fraud against Malusi Gigaba as the former Minister of Home Affairs, along with Home Affairs official Gideon Christians and Gupta businessmen Rajesh “Tony” Gupta and Ashu Chawla.

The case against the group is outlined in an affidavit by Stefanie Fick, OUTA’s Head of Legal Affairs.

“The apparent close relationship between Christians, Gigaba, Chawla and Tony Gupta should be investigated as it appears from the evidence above that Chawla and Tony Gupta didn’t have to follow prescribed procedure and received preferential treatment from government officials,” said Fick in the affidavit.

“In return, it appears that Christians was rewarded for his assistance. It also appears that Tony Gupta may have had the ability to influence decisions taken by Gigaba and the reason therefore should be properly investigated.”

While based in India, Christians helped the Guptas for years and, in return, they helped him.

In 2011, Christians emailed Chawlu, the Sahara CEO, the details of potential coal buyers in China and referred to the “possible 2.5% commission on the value of each deal referred to yourselves”.

From June to August 2013, while Christians was in New Delhi, he repeatedly helped out with visas for Gupta connections, including for staff for the new ANN7 TV station which was launched in August 2013.

In June 2013, he was asked to process a business visa for Tanvi Gupta, so she could come to South Africa frequently and marry Varun Gupta. “How can you apply for a business visa for 2 years but say the reason is for her to get married????” Christians wrote to Chawla. The pair married later that year in India.

In August 2013, Chawla sent Christians details of a selection of secondhand Mini Coopers available for sale in South Africa; the implication is that this may have been a thank you for his help.

In February 2014, the Guptas wanted help with removing a travel ban on a cricket administrator.

In May 2014, Christians was transferred to Cape Town International Airport, which apparently didn’t suit the Guptas.

In October 2014, paperwork started on transferring Christians back to India.

In November 2014, Christians sent his CV to the Guptas.

In December 2014, Chawla emailed Christians with visas for Dubai for four people who appear to be Christians’ relatives.

In February 2015, Chawla sent Christians the passports of some Gupta family members, including Vega and Akash Garg whose lavish May 2013 wedding at Sun City was funded by South African taxpayers. Chawla used Christians’ gmail address for this, underlining the unofficial nature.

“It would seem that Christians may have assisted to facilitate the immigration of the Gupta family to South Africa,” says Fick in her affidavit.

In October 2015, Christians was redeployed for four years to New Delhi in India as an Assistant Director, on the instruction of Gigaba, who was the Minister of Home Affairs at the time. This instruction caused some difficulty at Home Affairs, as his deployment letter was signed by a human resources official but the Foreign Office officials struggled to find a post to put him in and Christians needed a “Top Secret” security clearance.

“It is my understanding that Minister has issued an instruction and not an opinion or recommendation. Our role is to carry the Minister’s instruction,” Major Kobese, the Foreign Office Coordination and Support (FOC) director at Home Affairs, wrote in an email to someone in Home Affairs who sent it to Christians, who in turn forwarded the email chain to Chawla.

“All we working on at FOC is to ensure that Minister’s instruction is realized within a short-space of time… we have no authority to do contrary to what Minister has instructed.” Kobese noted that Christians’ deployment was “outside the normal recruitment process”.

Christians apparently resolved his deployment hiccups by appealing to the Guptas to intervene, when he sent Chawla the email chain from the officials, covertly sending it from his government email account to his gmail account and then to Chawla.

“It appears that Christians is contacting Chawla to ensure that matters are resolved in his favour instead of following formal channels,” says Fick, adding that this shows the degree of influence that the Guptas had over Home Affairs.

Fick’s affidavit and the annexures (annexures 1-14 and annexures 15-17) are on the OUTA website.

OUTA is a proudly South African non-profit civil action organisation, comprising of and supported by people who are passionate about holding government accountable and improving the prosperity of South Africa.