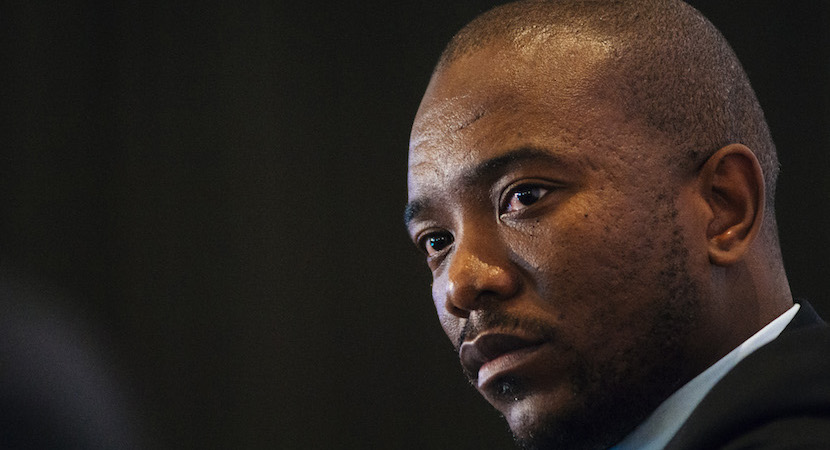 JOHANNESBURG — After months of dithering and a horrible 2018 for the DA thus far, this is probably DA leader Mmusi Maimane‘s most powerful message of the year so far. If he wants the DA to make inroads in South Africa’s election next year, he needs to push out this message like a pitbull and start taking on the ANC a lot more aggressively. With a recession and increasing weakness on display from President Cyril Ramaphosa, Maimane has a rare opportunity to completely upset politics in South Africa. Will he take hold of this moment or will he let it slide? – Gareth van Zyl

Nothing like being roused from slumber with ice-cold water to the face. That happened to South Africa on Tuesday with the news that our economy is in technical recession, having contracted by 2.6% in the first quarter and 0.7% in the second. The rand plummeted to R15.50 to the dollar as investors woke up to the cold reality that our economy is seriously sick.

The good news is that the DA has a proposal that can get the economy out of recession and build one South Africa for all.

South Africa is ripe for change and that change needs to come soon. Make no mistake, this recession is a very big problem that will bring even more pain than is already being felt. Junk status may be on the cards when Moody’s rates our credit in October. Our debt, which breached the R3 trillion rand mark this week, will become even more expensive and unsustainable, our social fabric even more frayed if not ripped to shreds.

Food and petrol prices will be pushed up and incomes down. Jobs will be shed: jobless numbers will soon breach 10 million. People’s hard-earned savings will be further eroded.

Our economy is nose-diving, and it is taking our hopes for the future with it. SA is running out of time to save it. We need decisive action to remedy the situation. This is a time for hard action, not soft consensus-building.

Without doubt, this crisis is due to government’s gross mismanagement of the economy. Africa is growing at around 3%, with growth in Ethiopia, Cote d’Ivoire, Senegal and Rwanda above 7%. SA is falling behind both emerging and developed countries. Among the world’s largest economies, we are the weakest and the only one in recession. So external factors cannot be blamed, though they are certainly not helping right now.

Even the ANC government admits that economic mismanagement is at the heart of the problem, though it has chosen to put the blame on Zuma, conveniently foregoing the usual “collective accountability”. (Would they be giving Zuma the credit if our economy were rebounding? Would Zuma have lasted nine years as president if they hadn’t protected him in eight successive motions of no confidence?)

Less widely understood is that the economy will stay on its downward trajectory until we get the basics right. The patient is very sick and only a back-to-basics lifestyle change to healthy eating and exercise will get it on the road to recovery. The patient has been on expensive painkillers for so long now that the painkillers themselves are becoming part of the problem.

The government’s latest proposed painkiller, a R43 billion stimulus package, could do more harm than good. The sickness is not acute, like a bout of flu that can be relieved with aspirin. It is chronic, from years of hard living. Years of bad and uncertain policy based on failed ideology. Years of inaction or wrong action.

In fact, households have been getting poorer for the last five years, as real per capita incomes have been falling since 2013.

The only road to health is to do what every broadly prosperous society has done. Embrace a market-driven economy and build a lean, capable state that creates conditions that promote investment, be it the planting of seeds by small farmers or the building of factories by multinationals.

Despite many constraints imposed by national government, the DA has done this where we govern, and we’ve achieved the results that show it works. Three quarters of all jobs created in the past year were created in the DA-governed Western Cape, despite a crippling drought in the area. That amounts to 123 000 new jobs created while during that same period 124 000 jobs were destroyed in Gauteng, the country’s biggest provincial economy.

South Africa’s agenda for reform must be based on the principles of policy certainty, fiscal prudence and national unity, showing a decisive move away from statist interventionism.

Building a lean, capable state is the first step towards ensuring fiscal discipline. We must commit to appointing people on merit rather than on political loyalty. This is key to eradicating corruption in the public service and to ensuring efficient, effective delivery of services.

Our bloated public sector and lumbering state-owned enterprises are like ticks sucking our fiscus dry. We have to reduce the public wage bill. Whilst not a massive saving, cutting our bloated cabinet will indicate our commitment to reducing the size and cost of our bureaucracy.

We should immediately set about privatising or part-privatising our non-strategic SOEs such as SAA, the bottomless pits into which billions of rands of public money is poured never to be seen again. Eskom must be split into separate power production and distribution businesses, and Eskom’s production monopoly must be terminated by allowing cities and municipalities to purchase power directly from producers. Competition in power production will very quickly reduce the cost of electricity, which alone will be a major boost to our economy.

We must commit to the protection of private property by decisively rejecting expropriation without compensation in favour of effective, well-resourced, constitutional urban and agricultural land reform that puts productive ownership in the hands of millions of black people.

A healthy, growing economy will be able to collect the taxes required to fund better education and healthcare systems, a compassionate welfare programme, effective land reform and restitution programmes, and an effective police service, trained, resourced and equipped to be able to maintain law and order and keep people safe.

We must restore and protect the independence of key democratic institutions such as the reserve bank, public protector and national prosecuting authority, so that power is checked and balanced and corruption curbed. Those implicated in state capture must be held accountable.

These are the basics of good economic management and the foundations for a strong constitutional democracy. There is no magic drug. Just sound economic principles, leadership willing to implement them, and an electorate willing to appoint that leadership. That’s why every single South African has a role to play in building one prosperous South Africa for all.