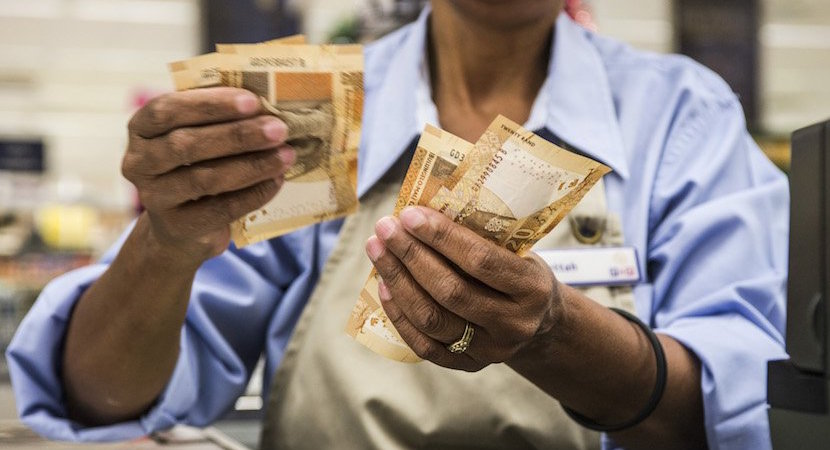 JOHANNESBURG — The numbers here make for very depressing reading and are a bell-weather for a possible downgrade to junk status by credit rating agency Moody’s. What’s clear is that the ANC’s total mismanagement of the economy is starting to have a real-world impact. The rand has also reacted severely to the news, weakening past the R15.20/$ mark at the time of writing. Ramaphosa is starting to face stark choices: either liberalise the economy or continue going down the ANC’s destructive socialist, state-interventionist route. – Gareth van Zyl

By Ntando Thukwana and Ana Monteiro

(Bloomberg) – South African President Cyril Ramaphosa suffered the same false start as his predecessor nine years ago: a recession in his first six months in office.

The economy unexpectedly contracted an annualized 0.7 percent in the second quarter from the previous three months, Pretoria-based Statistics South Africa said in a statement Tuesday. That compares with a decline of 2.6 percent in the first quarter and is the first recession since 2009.

The median estimate in a Bloomberg survey was for 0.6 percent expansion. The economy grew 0.4 percent from a year earlier.

A contraction for the fourth quarter of 2016 was later revised to show growth, resulting in this being the first recession since the financial crisis of 2009.

Highlights from the release include the following:

By Robert Brand and Colleen Goko

(Bloomberg) – South Africa’s rand extended the worst decline among emerging-market peers as data showed the country’s economy had slipped into a recession for the first time since 2009. Stocks and bonds also fell.

The rand weakened as much as 2.6 percent after data showed gross domestic product unexpectedly contracted in the second quarter, raising the nation’s risk profile at a time when emerging-market assets are under pressure from a rising US dollar and global trade tensions. It also increases the chance of a credit downgrade by Moody’s Investors Service, which would plunge the country’s local-currency debt into junk status.

“Equities, bonds, rands… It’s awful,” said Abri du Plessis, a portfolio manager at Gryphon Asset Management Ltd. in Cape Town. “I’m struggling to see any light. There is now a distinct possibility that there will be a downgrade by year-end and we won’t see the end of it for South Africa’s markets.”

The rand fell to 15.2238 per dollar by 12:12pm in Johannesburg. The yields on benchmark 2026 government bonds climbed 17 basis points to 9.17 percent. The benchmark stock index fell 0.4 percent, spurred by a 3.1 percent slump in the banking gauge.

By Colleen Goko and Ana Monteiro

(Bloomberg) – South Africa’s unexpected slump into a second recession in almost a decade has boosted fears of another round of credit-rating downgrades that could see a sell-off in local-currency bonds.

The cost of insuring the country’s debt against default for five years using credit-default swaps spiked to the highest since November 2016 while yields on the government’s benchmark local-currency bonds due in December 2026 rose to an nine-month high. The rand weakened the most against the dollar among major and emerging-market currencies.

Rand-denominated bonds – which comprise about 90 percent of the country’s liabilities – have the lowest investment-grade rating with a stable outlook at Moody’s Investors Service. Today’s data could see the company follow S&P Global Ratings and Fitch Ratings Ltd. by reducing this to junk, traders including Michelle Wohlberg at FirstRand Bank Ltd. said.

The release “has reignited fears of a possible Moody’s downgrade on Oct. 12,” she said. “Low growth impacts on key revenue streams like tax collection, and given the already high strain on our fiscus, this growth figure is concerning.”

President Cyril Ramaphosa’s ascent to power since December initially boosted confidence and the rand following Jacob Zuma’s corruption-plagued tenure of almost nine years. That optimism has faded as structural reforms weren’t implemented fast enough and global trade wars and turmoil in other emerging markets soured sentiment. South Africa had been caught in the crossfire of crises in Turkey and Argentina, where currencies have plunged this year.

Moody’s said in March South Africa’s ratings could be placed on negative outlook and eventually downgraded if the government’s commitment or ability to revive economic growth and stabilise debt falters.

Should Moody’s downgrade the local-currency rating, rand debt would fall out of gauges including Citigroup Inc.’s World Government Bond Index, and this could see billions of rands of outflows, jeopardising the country’s already-widening budget deficit.

The rand’s slump amid an emerging-market sell-off and higher oil prices drove inflation to a 10-month high in July and the recession news complicates the central bank’s job.

“The South African Reserve Bank faces a major dilemma of whether it should raise rates due to rising inflationary pressure from a weaker currency or refrain from doing so due to very weak economic activity,” said Piotr Matys, a London-based emerging-market strategist Rabobank. “It’s a close call, but it is reasonable to expect that the overall message will be relatively hawkish” when the bank announces its next decision Sept. 20, he said.

Finance Minister Nhlanhla Nene will present the government’s mid-term budget Oct. 24. The sluggish growth numbers will make his task of convincing investors that the government can maintain spending discipline in the run-up to 2019 elections even harder.

“We think that South Africa still has a stay of execution until after the election next year, but that post the election, markets will start to price in a downgrade more explicitly,” said Kim Silberman, analyst FirstRand Ltd.’s Rand Merchant Bank unit in Johannesburg.