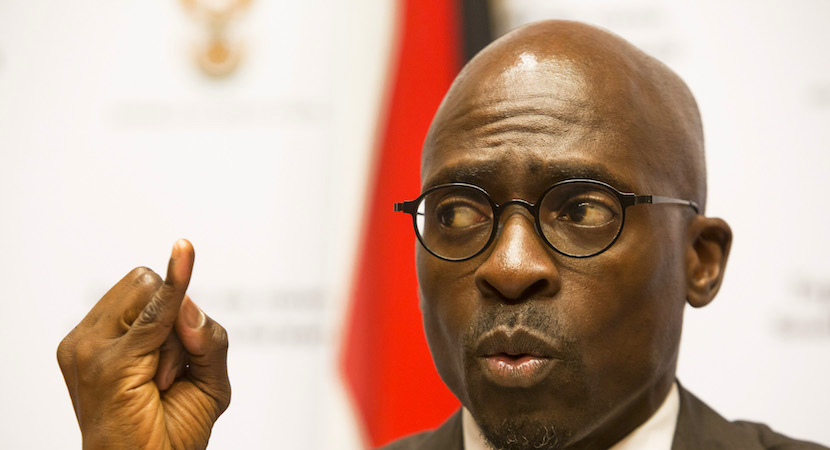 CAPE TOWN — Malusi Gigaba is perhaps best known for helping the Guptas become naturalised South Africans when he was Home Affairs Minister – and being appointed by former President Zuma to replace the troublesome Finance Minister Pravin Gordhan – after Gordhan was royally screwed over by captured law enforcement and prosecution authorities. And being Public Enterprises minister while SOEs were being looted by Zuptoids and their ilk. And more recently, a solo sex tape of his was allegedly hacked for distribution. Logically, he’s now a veteran of parliamentary probes, proving to have more lives than Zuma had with his No Confidence debates. Akumina (it wasn’t me), could be his middle name. This story has Nicky Oppenheimer – and his business associate Manne Dipico (former Northern Cape Premier), calling Gigaba a liar over his claim that he never gave approval for Oppenheimer’s private Fireblade Aviation facility at OR Tambo Airport. Something three courts have backed Oppenheimer on, one judge labelling Gigaba’s courtroom untruths a violation of the Constitution. Surely the threads of our impeccably-tailored emperor are now bare? And yet he struts on, one of his Black First Land First supporters literally shaping up to throw a punch at Oppenheimer during yesterday’s hearing. Story courtesy of the Daily Maverick. – Chris Bateman

To say October 2018 has brought an embarrassment of riches for Home Affairs Malusi Gigaba is an understatement.

First there was his testimony before Parliament’s home affairs committee over the naturalisation of several of the Gupta family members around the central theme of “It wasn’t me” that continued until just before 04:00 early in October. It was in a similar vein to his “I don’t know” seven-hour testimony in mid-March on his role while public enterprises minister in charge of State-owned Entities (SoEs) such as Transnet and Eskom that emerged as central to State Capture.

Then there was the solo sex tape that also wasn’t quite Gigaba’s fault, at least not the leaking of it. In a series of Sunday morning tweets on 28 October Gigaba described the leak as a “gross invasion of privacy” and a tool for blackmail, which he refused to entertain.

“I take this opportunity to publicly apologise, in advance, to the rest of my family… and the South African public for the pain and embarrassment the likely wider distribution of this private material will cause…”

My wife and I have learned, with regret and sadness, that a video containing material of a sexual nature, meant for our eyes only, which was stolen when my communication got illegally intercepted/my phone got hacked, in 2016/17, is circulating among certain political figures…

And on Tuesday that pesky matter re-emerged, subject to three court hearings that found Gigaba on the losing side of the ministerial (non) approval for the Fireblade Aviation private facility at OR Tambo International Airport. Gigaba says he didn’t approve, but its owners, the Oppenheimers, told the portfolio committee on home affairs he did and they won – three times in different courts that all agreed the minister had “deliberately told untruths”.

The Pretoria High Court in December 2017 found the minister had told “untruths”, and after a ministerial appeal a full Bench of the same court upheld that in a judgment circulated just as Gigaba was getting ready for his maiden Budget in February.

“The minister has committed a breach of the Constitution so serious that I could characterise it as a violation.”

Then it was on to the Supreme Court of Appeals in March after Gigaba’s bid to go straight to the Constitutional Court was dismissed with costs. But the Bloemfontein-based appeals instance also rejected the appeal in late March 2018, saying there was no prospect of success. Now it’s emerged that Gigaba, some two months ago, filed papers in the Constitutional Court in a final push to appeal the matter.

This ministerial legal action had cost R874,199 by April 2018, according to the reply to a parliamentary question from DA Chief Whip John Steenhuisen, who has also laid a complaint with the Public Protector about Gigaba’s untruths.

But back to Tuesday in the jam-packed S12A committee room that cleared up after the parliamentary bouncers finally moved in to muscle out Black First Land First (BLF) protesters, after yet another disruption of a committee meeting by this group. Amid shouts of “Shut down Fireblade”, one BLF member almost came to fisticuffs with company chairman Nicky Oppenheimer. It was averted when in stepped Manne Dipico, the former Northern Cape premier, who served the permissible two terms, turned parliamentary councillor for president Thabo Mbeki and then 2006 local government ANC election boss. Today he’s also a director at Fireblade Aviation, among several other business roles.

What the billionaire businessman Oppenheimer senior went on to tell MPs – divested of the De Beers diamond and other mining interests, aviation is now the passion – was an account of four years of getting some 27 approvals form various government entities together from 2012. That included signing a 10-year lease, with a 10-year renewal option, with Denel’s industrial property section, and securing the permissions for both the Airports Company of South Africa (ACSA) and the Air Traffic Navigation Services, which controls the airspace over South Africa.

It was at a meeting with Gigaba on 28 January 2016 in Pretoria at which Oppenheimer said he was told Home Affairs approval was given. It was a “cordial, friendly meeting”, he said on Tuesday.

“Almost the first thing the minister said was that he was delighted to grant us approval.”

That written approval would be held back for a few days, maybe a week, for the final operational issues to be approved.

Afterwards he wrote to Gigaba regarding this good meeting, and sent the minutes to Home Affairs for comment, correction and any other input. Receipt of those minutes was officially acknowledged – and that became key in subsequent court action.

“Did they approve the minutes? No, they didn’t. Did they take up the opportunity to amend, correct the minutes? No, they did not,” Oppenheimer told MPs, segueing into his “astonishment” to have heard the minister attempting to argue that he never gave permission, by citing something about a leaked memo and bribery in an earlier home affairs committee meeting in May 2018.

“So the minister lied to the committee and I find it very offensive he said we bribed (somebody to steal),” said Oppenheimer. “We will be happy to produce all documents.”

Nicky #Oppenheimer of Fireblade Aviation says Malusi Gigaba told us he was delighted to approve a private airport space next to OR Tambo. “We had several meetings and then suddenly Gigaba changed his mind and I don’t know what happened or what it was. “

All that was a reference to the home affairs committee meeting of 8 May 2018, when the Fireblade Aviation saga was discussed by Gigaba and his then director-general Mkuseli Apleni. In July, Apleni left Home Affairs after some nine years at the helm. He had led from the front on the Gupta naturalisation debacle, to insist for a year or so that all was done according to law, and the Fireblade Aviation saga.

Correspondence and approvals were raised then in that parliamentary home affairs committee meeting of 8 May, given the relative proximity of Gigaba’s unsuccessful bid for appeals, some five weeks earlier.

“Nobody can infer concurrence, or approval, on the basis of a leaked internal memo. We talk through internal memos to each other in the department,” Gigaba told MPS, according to the recording of the meeting on the Parliamentary Monitoring Group (PMG) website.

“The only way to get hold of an internal memo is through bribery. They bribed somebody in the department to obtain it.”

Earlier in that committee meeting, Gigaba said he had written to several fellow cabinet ministers to solicit their views on the Fireblade Aviation terminal proposal, given there was no policy on private airport facilities. The then finance minister changed his mind to accede to the proposal, but then there were letters from Denel and its board, objecting now.

“It was not my duty to question it,” he said, arguing that he was not the shareholder minister for Denel, which fell under public enterprises.

Malusi Gigaba lied about Oppenheimer private terminal, he lied about Brian Molefe & Dudu Myeni. Now he's lying about #Gupta, yet he remains an Honourable Member.
He should be reshuffled to become Minister of Lying Affairs.#Gigaba #Gupta

Gigaba also argued that the court judgments on him telling deliberate untruths were merely opinions – former police minister Nkosinathi Nhleko argued similarly in defence of Mthandazo Ntlemeza’s appointment to head the Hawks despite a judge’s finding of dishonesty against him – while Apleni confirmed the Fireblade Aviation private arrivals/departure facility was fully operational following the court orders.

But what did emerge on Tuesday is that the Fireblade Aviation private facility has been fully operational also for international flights as what the Oppenheimers called “the gateway to South Africa”, since 12 February 2018. The domestic operations started in 2014.

And while there was no signed agreement – one sent to Home Affairs on 4 April 2018 following the court orders had yet to even solicit a departmental acknowledgement of receipt – the company is paying R117,000 a month to the department.

Although Nicky Oppenheimer was ready to explain what this was for, committee chairperson Hlomani Chauke stopped him, saying it was for the department to account. Earlier he pointed out this payment had not been included in any of the departmental budgetary and performance plans.

On Tuesday Oppenheimer senior was supported in his account to MPs by his son, Jonathan: “My father has very accurately described the moment of approval.”

And while Nicky Oppenheimer said he didn’t know what happened – just that “something happened” to end the previously enjoyed support – Dipico, an old hand at matters political, did not mince his words. It was the changes at Denel in late 2015 after which “all of a sudden the minister calls us” with objections, said Dipico:

“The people form Denel stood back. They were no longer energised…

“We say the minister did approve in his own handwriting…” he said, adding in reference to Gigaba’s bribery comments: “It was a hurtful thing when I saw a comrade of mine going that route.

“He (Gigaba) has to be assisted. There was approval. Finish and klaar,” said Dipico, turning to MPs.

“He needs to be assisted, and you must do so.”

After the committee meeting, he elaborated on what he meant by saying Gigaba needed to be assisted.

“How many courts have already decided he’s not told the truth. You reach a stage, how may times can you tell somebody: Please, look yourself in the mirror… I said to these members (of Parliament), who are comrades, colleagues, it’s now time to help,” said Dipico, adding Gigaba was “just destructing himself”, and also raising “what happened earlier in the week”, a clear reference to the sex tape debacle.

“He needs help… This is a serious indictment on this minister. That’s the point I was raising as a human being.”

The home affairs committee decided to call Gigaba and his senior management team back for some more answers. And Gigaba gets to fight another day. DM