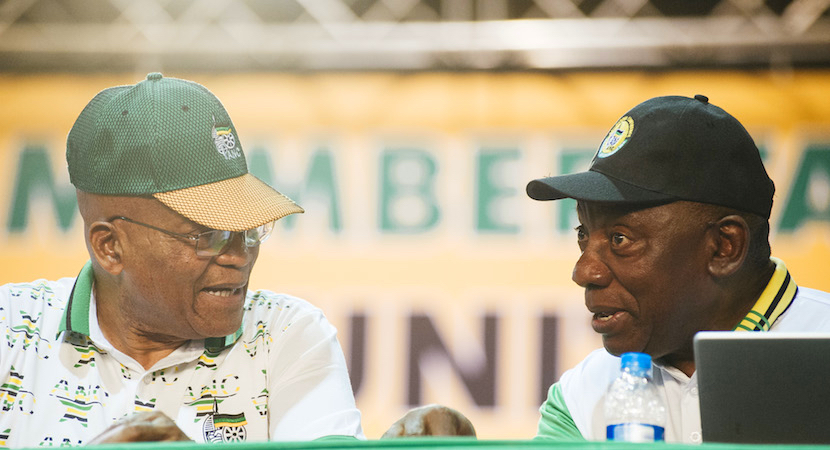 CAPE TOWN — ANC loyalty in South Africa runs deep, not least because apartheid united black people, with the then-liberation movement the dominant rallying point for resistance. For the majority of South Africans, there’s still rampant poverty and insufficient housing and/or basic services and their lot is inextricably tied up with being treated as second-class citizens. Almost a full quarter of a century after apartheid was officially buried and the ANC took power, these conditions persist. Struggle memories are long, regardless of what malfeasance, dysfunction or inaction the ruling party is latterly guilty of. At first glance I thought; “how on earth can two men whose approaches to leadership are such polar opposites, with one even likely to see the other behind bars, walk shoulder to shoulder smiling so easily in public?” The seemingly incongruous show of unity is no sham however, nor does it mean that the much-debated tête-à-tête between Ramaphosa and Zuma yielded a burying of the hatchet until after the elections. The collegiality you see is real – and all about historical occasion. How long that cement can hold though, is another question entirely. Story courtesy of the Daily Maverick. – Chris Bateman

From taxi ranks to church services, community halls and even maternity wards, the ANC engagements across KwaZulu-Natal continued on Tuesday, 8 January 2019, the 107th anniversary of the ANC’s founding. There wasn’t necessarily much fanfare — from social media photos, it appeared the ANC interactions and gatherings generally appeared modest but determined.

ANC Women’s League president Bathabile Dlamini left to the officials to explain her absence at the presidential events — so she could deliver gifts to four babies born at Durban’s Addington Hospital on the ANC’s birthday. Later a league statement said one of the babies was named “Khongolose”, the colloquial name of the ANC.

“Our baby has already been named Siko, which means ‘culture’ in English. As we see this good culture that ANCWL is practising of coming to visit us, we will be calling him uSiko Luka Khongolose,” the statement quotes the baby’s mother, Nosipho Dlamini, as saying.

There are three more days of blitzes, as the ANC calls these activities, before the launch of what the governing party calls the “People’s Manifesto” on Saturday, 12 January at the Moses Mabhida Stadium.

But on Tuesday, the ANC did the highly unusual: Separating its January 8 statement that traditionally sets out the governing party’s priorities for the year, and its election manifesto launch. Call it double dipping ahead of the crucial 2019 elections in a few months, officially, the party line was that it was reporting back on the past 25 years.

That report-back was soaked in choreographed symbolism, taking it back to the founding of the ANC in 1912 — and following in the footsteps of Nelson Mandela, who in South Africa’s first democratic election voted at Ohlange Institute, established by the party’s founding president John Langalibalele Dube and his first wife Nokutela Dube, née Mdima.

ANC President Cde @CyrilRamaphosa, accompanied by former President Cde @PresJGZuma, arrives at the Ohlange Institute in Inanda for the Wreath Laying Ceremony at the gravesite of President John Langalibalele Dube, the first President of the ANC. #ANC107 pic.twitter.com/hbcldjexzd

In doing so, ANC mythology was entrenched: much was made of Mandela, having cast his ballot, making his way to Dube’s grave to “report to you that South Africa is free”. Those comments were not officially on record but became part of oral history. On Tuesday, this was reinforced.

As Madiba did a report-back on election day 1994 to Dube, so did Ramaphosa, with Zuma, on ANC unity 25 years later. It’s heavy on the symbolism, and not the first time Ramaphosa has channelled Madiba in his bid for party renewal: On 11 February 2018, he spoke at Cape Town’s Grand Parade exactly from where Mandela addressed the crowds after his release from jail 28 years earlier.

But this is KwaZulu-Natal, and politics, particularly ANC politics, is far from simple. Nor is anything simple that involves Zuma. Since having lost his presidency of the ANC at the December 2017 Nasrec ANC national conference and the presidency of South Africa two months later, Zuma has bucked the trend set by his predecessors and remained unusually visible in the party and in the public space.

There are many in the ANC, even those not particularly fond of Zuma, who will explain away this regular attendance at ANC National Executive Committee (NEC) meetings as his right because former presidents remain ex officio members. But by all accounts, neither Mandela nor his successor as party and country president, Thabo Mbeki, or even deputy president Kgalema Motlanthe, notched up quite such enthusiastic attendance records.

And it is that maintaining of public and party profile, so uncommon for a former ANC president, rather than what Zuma says even on his newly established Twitter account, that may hold the key to ANC internal factional jockeying.

On Tuesday Zuma was silent, although he clearly exchanged some good jokes and giggles with Ramaphosa on stage at the January 8 rally in a mammoth marquee set up at Ohlange stadium. The day had been Ramaphosa’s to speak, and he did so, thanking Zuma for his role in ANC unity, repeatedly referring to Zuma by his clan names “Nxamalala” and “Msholozi” in the traditional ultra-polite form of address.

“Siyabonga (thank you), Nxamalala,” said Ramaphosa. “Zuma is a former president, but one I am going to use as a president of the ANC.”

Opinion: With the ANC polling at 61% (up from 50% under former President Jacob Zuma), is @CyrilRamaphosa under-estimating his own popularity and over-estimating that of the man he succeeded? #ANC107

Later Ramaphosa paid tribute to KwaZulu-Natal ANC mobilisation as not only uniting the province but also having “succeeded in uniting the leadership of the ANC”, adding that he was “delighted to work” with Zuma.

Ramaphosa again moved to dismiss claims that a meeting between the two was to be called to clear the air — they are always talking, he had said earlier at Dube’s grave. There he described Zuma as someone “who is still a leader in the broader ANC and who is still able to play a role… We are committed to unity”.

And so Tuesday’s symbolism-heavy ANC push for unity went so far as to underscore the working relationship between Ramaphosa and Zuma. It dates back to 1991 when Ramaphosa was elected ANC secretary-general with Zuma as his deputy, while roles reversed in 2012 when Ramaphosa became deputy to Zuma as president in the ANC, a relationship maintained in government after the 2014 elections.

It would not have been lost on Ramaphosa that while he received a warm reception with applause and cheers at the official birthday event at Ohlange sports grounds, it was Zuma who got the loudest acclamation, repeatedly.

There is a very simple, perhaps simplistic, but nevertheless important bottom line to Tuesday’s unity show: KwaZulu-Natal is the ANC’s biggest province, and eThekwini its largest region. If ANC members and supporters there do not make their cross on the ballots, it impacts on voter turnout. And if successive election results have highlighted one trend, it is that with a low voter turnout the ANC loses.

Tuesday’s show of unity in action — and repeat reassurances from Ramaphosa that his predecessor Zuma had a role to play — may just persuade those hardcore Zuma loyalists, if not to end factional jockeying, then at least to show restraint until after the 2019 elections.

Winning the elections is vital for Ramaphosa to show that his style of ANC leadership and organisational culture can carry the day. That’s against the push-back of those, described loosely as the radical economic transformation grouping, that are associated with Zuma in the bruising run up to the ANC December 2017 conference.

That there are factional divisions beyond the proclaimed unity emerged in the ANC draft public representatives list for Parliament. That list, still to be finalised after a vetting process, also showed that while the clean-up in government is proceeding — there are new heads at the prosecuting authority, Hawks, crime intelligence and the search is on for a new tax collection boss — within the party there is robust contestation where even just talk of restoring the integrity of the ANC appears to flounder on factional interests.

The hero worship by the ANC in KZN of a man who very nearly destroyed SA and sold chunks of our state to his personal benefactors makes me depressed about our future. Ramaphosa's bromance act goes beyond tactical politics. God help us

This is a fine balancing act for Ramaphosa as president of the party and government.

Unlike in previous years when the ANC’s January 8 statement cast forward to that year’s priorities, on Tuesday it was all about looking in the rear view mirror. ANC government delivery statistics for basic services and housing, social grants, free education and antiretroviral treatment were hauled out to underscore ANC delivery. Of course, statistics such as nine out of 10 South Africans having clean water and eight out of 10 electricity, stand sharply in contrast even to the nearby shack lands, built precariously on the slopes of Inanda and surrounds, where the dirt roads are rutted.

Little was given away on Tuesday about the ANC election manifesto except that it would be “a clear plan for growth and faster progress”, according to Ramaphosa, who as president of South Africa has put clean governance and investment for an inclusive economy as central to his administration.

“(The ANC manifesto) is a plan for an inclusive economy and society in which all South Africans experience a steadily improving quality of life and enjoy shared prosperity. It is a plan to unite the country, grow the economy, create jobs and reduce inequality,” said Ramaphosa.

“It will call on all South Africans to be part of an extraordinary national effort to place the country on a higher path of growth and development.”

That will be Saturday’s business, and then the push on the campaign trail, as Ramaphosa on Tuesday vowed the ANC must score not “not just a percentage (but) an overwhelming victory” come polling day 2019. DM