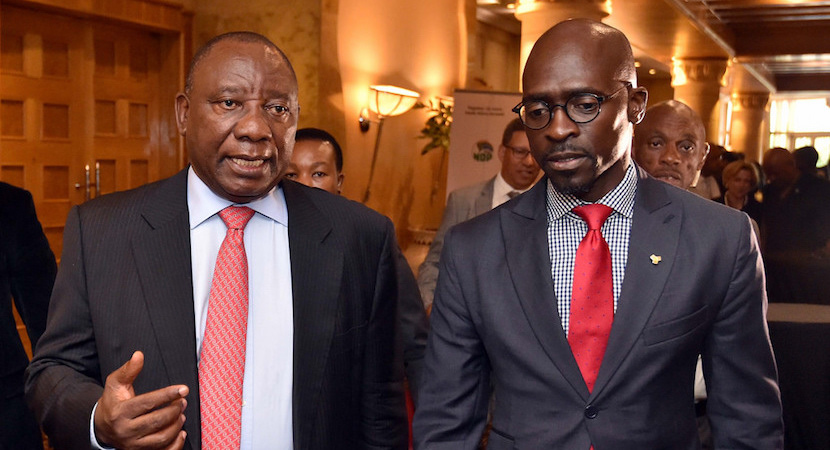 CAPE TOWN — From this learned analysis of the constitutional provisions, it seems the DA is barking up the wrong tree in asking a court to overrule President Cyril Ramaphosa’s decision to re-appoint dicey cabinet ministers, Malusi Gigaba and Bathabile Dlamini. On a cynical interpretation, the DA may have calculated this to be lawyering money well spent in publicly profiling the manipulations and dicey doings of the unpalatable Zuptoid cabinet pair. It could even translate into votes, if the timing’s right. So, perhaps the DA’s legal advice actually matches that of constitutional law Professor Pierre de Vos’s here. Which immediately begs the question; if, as Prof De Vos asserts, Ramaphosa has all the legal power to fire Nugent-commission-disgraced SARS Commissioner Tom Moyane, (probably after a disciplinary hearing) and the dubious cabinet pair, why has he not yet done so? Ethical lapses by cabinet ministers, de Vos reminds us, are not a legally-sackable offence. Which tells us how carefully the new presidential incumbent has to tread politically. Never forget the 179 votes that separated Ramaphosa from Zuptoid presidential candidate, Dr Nkosazana Dlamini-Zuma at Nasrec. Perhaps the way to look at is that, given that he’s fighting with one hand tied behind his back, Ramaphosa has worked some minor wonders. Story courtesy of the Daily Maverick. – Chris Bateman

The Constitution and legislation bestow executive power on the President to appoint and dismiss Cabinet ministers and the Sars Commissioner and this power is not constrained by requirements of procedural fairness. Such appointments differ from appointments made in the normal course of employment and – as I will explain below – when such a person is dismissed by the President, he or she will not be able to have the dismissal reversed by a court on the basis that the normal requirements for procedurally fair dismissal were not followed.

The most “political” of these powers is the power to appoint and dismiss members of the Cabinet, a power contained in section 91 of the Constitution. Apart from the requirement that all but two of the Ministers in the Cabinet must also be members of the National Assembly, the Constitution does not prescribe formal requirements for either appointment or dismissal of Cabinet ministers.

Section 96(1) of the Constitution does require that members of the Cabinet must act in accordance with a code of ethics, but neither the Constitution nor the Executive Members Ethics Act requires the President to dismiss a Minister who breaches this code of ethics. (Of course, voters may well punish the governing party at the polls, if the President declines to dismiss ethically compromised Cabinet ministers.)

South African constitutional law does not have a “political question doctrine” that excludes certain decisions of the President from judicial review. As the Constitutional Court first held in Fedsure Life Assurance Ltd and Others v Greater Johannesburg Transitional Metropolitan Council and Others the exercise of all public power is subject to judicial review. This includes decisions made by the President as head of state or head of the executive.

In principle, a decision by the President to appoint or dismiss a Cabinet minister can be reviewed by the courts if the decision is not rational. As the Constitutional Court made clear in Democratic Alliance v President of South Africa and Others (2012), both the process and the decision to appoint or dismiss must be rationally related to the purpose for which the power was conferred.

But I suspect in the case of the appointment or dismissal of Cabinet ministers, a court will only interfere with such a decision in the most extraordinary circumstances – for example, where the President appoints a Cabinet minister in return for a bribe. A court may avoid interfering in such profoundly political decisions by concluding that the purpose for appointing or dismissing a Cabinet minister is at least partly to advance purely political interests. If the decision was not corrupt or made with an ulterior purpose that has nothing to do with political considerations, the decision may then be found to be rational.

For example, the President may decide to dismiss a Cabinet minister because the minister belongs to the wrong faction of the political party and this would be perfectly rational. Or the president may decide to appoint a minister – despite being dishonest or corrupt – because the Cabinet minister represents an important constituency within the party, and this, too, may be found to be rational. Similarly, the appointment of an all-male Cabinet may be found to be rational.

While the DA could make a plausible argument that it was irrational for President Ramaphosa to retain Ministers Gigaba and Dlamini in his Cabinet, I suspect the court may reject this argument on the ground that the President has wide powers to select his or her Cabinet. It goes without saying that a Cabinet minister who is dismissed would not be able to challenge the dismissal claiming he or she was not given a fair hearing and that the dismissal was therefore not procedurally fair.

Read also: Tannie Evita: These 11 ANC politicians MUST go directly to jail. Do not pass a Gupta!

Although there are slight differences which I will highlight below, similar principles apply to the dismissal of Sars Commissioner Tom Moyane. This much is made clear by the Constitutional Court judgement in Masetlha v President of the Republic of South Africa and Another. In the Masetlha case, then President Thabo Mbeki fired Billy Masetlha, the Director-General of the National Intelligence Agency, after which Masetlha challenged his firing in court.

The relevant legislation (read with the Constitution) bestowed the power to appoint the Director-General on the President. Similarly, section 6(1) of the South African Revenue Service Act bestows the power to appoint the Sars Commissioner on the President. In both cases the legislation does not provide for the dismissal of the individuals who had been appointed for a fixed term.

In the Masetlha case the Court held that the power to dismiss is necessary in order to exercise the power to appoint.

“Without the competence to dismiss, the President would not be able to remove the head of the Agency without his or her consent before the end of the term of office, whatever the circumstances might be.”

Masetlha complained that he had been dismissed without the President affording him the opportunity to be heard and that the President therefore did not comply with the requirement of procedural fairness. The Court rejected this argument. Unlike ordinary employment situations, the power to dismiss is an executive function that derives from the Constitution and national legislation.

Read also: All aboard SA’s gravy train – the business of politics; Graham Sell

The Promotion of Administrative Justice Act (PAJA) also explicitly excludes the exercise of executive functions exercised under section 85(2)(e) of the Constitution from the ambit of the Act. This includes all functions exercised by the President in terms of national legislation – including the power to appoint and dismiss the Sars Commissioner provided for by section 6(1) of the Sars Act.

“It would not be appropriate to constrain executive power to requirements of procedural fairness, which is a cardinal feature in reviewing administrative action. These powers to appoint and to dismiss are conferred specially upon the President for the effective business of government and, in this particular case, for the effective pursuit of national security.”

This means that the President has the power to dismiss Tom Moyane as Sars Commissioner without complying with the requirements of procedural fairness and without having to wait for a disciplinary hearing to find him guilty of misconduct.

But this is not the end of the matter.

“It is therefore clear that the exercise of the power to dismiss by the President is constrained by the principle of legality, which is implicit in our constitutional ordering. Firstly, the President must act within the law and in a manner consistent with the Constitution. He or she therefore must not misconstrue the power conferred. Secondly, the decision must be rationally related to the purpose for which the power was conferred. If not, the exercise of the power would, in effect, be arbitrary and at odds with the rule of law.”

But as the court also pointed out in the Masetlha case, even if procedural justice was a requirement for the exercise of the power to dismiss, on the facts, Moyane was given ample opportunity to state his case to the President.

He was also given ample opportunity to state his case to the Nugent Inquiry, but this is not relevant as judge Nugent is not the person who would be making the decision to fire Moyane. It is the President who would make the decision (either accepting or dismissing the recommendation from Nugent) and he is the one who would have had to hear Moyane’s version if requirements of procedural fairness applied. Although, as I have shown, such requirements for procedural fairness do not apply in this case.

It is further important to note that the Masetlha judgment distinguished between the substantive power of the President to appoint and dismiss somebody like Moyane, and the resultant power to terminate the underlying contract of employment. While the President clearly has the power to dismiss Moyane, it is not clear whether he has the power to terminate the employment contract before a disciplinary hearing has been concluded.

In terms of section 18(3) of the South African Revenue Services Act, the Minister of Finance must “approve the terms and conditions of employment for any class of employees in the management structure of SARS”. We do not know what terms and conditions were attached to Moyane’s employment contract, but depending on these terms and conditions, in the event that President Rampahosa fires Moyane a court may order that Moyane be compensated for the duration of his contract. We will have to wait for details of the contract to know for certain whether this is so.

Meanwhile, nothing stops President Rampahosa from firing Tom Moyane as Sars Commissioner. Nor does anything stop him from firing the lying Malusi Gigaba and Bathabile Dlamini. The only difference is that – depending on the terms of his contract – Moyane might be able to convince a court that he is entitled to be paid out for the rest of his contract. DM