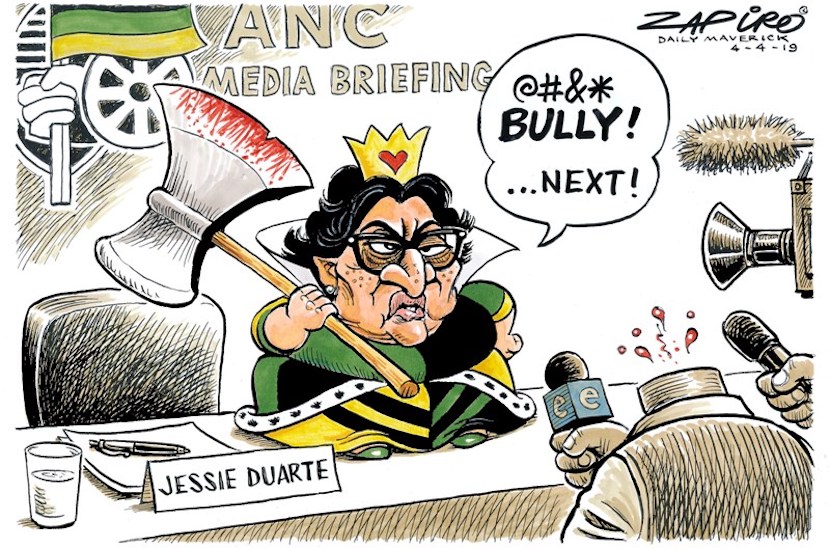 LONDON — Politicians often arrange news conferences to spin their stories and many of them think the media is there to reflect what they say even if it is a long, boring monologue that nobody is interested in. President Donald Trump is a prime example of this and it is clearly what the Deputy Secretary-General of the ANC, Jessie Duarte thinks. I find this surprising as I remember her as far friendlier and accommodating when she was President Nelson Mandela’s personal assistant. Madiba understood that journalists sometimes attended events just to ask questions about other matters and he always accommodated us; this clearly did not rub off on Duarte or maybe she adopts the style of her former boss Jacob Zuma. If she wanted the media to sit in silence while she pontificates at a news conferences or to back off since her verbal attack against eNCA journalist Samkele Maseko it will probably have the opposite effect. The bear must now be poked. And this is not a game only for the media, judging from the 911 reactions to Kalim Rajab’s article in the Daily Maverick, the voting public is watching and will be judging whether this is the kind of leaders that they want for South Africa. – Linda van Tilburg

The odious Jessie Duarte: Why this bully will be judged harshly by history

“How DARE you, Fifi Peters, for asking me impertinent questions about why my son’s business class ticket to India was paid for by the Guptas, and whether I knew that his business partner had close ties to Salim Essa. How can this possibly be in the public interest even if I lead the ANC? The poor man’s business is now shut down because of your rubbish lies. In fact, let me turn it around and respond that you are a member of a corrupt TV station, CNBC. You want to destroy this country, and you want me to be a part of your destruction!

Can we please stop worrying, journalist Mercedes Besent, about how many times ministers and officials met with the Guptas? Why on earth should SABC Radio be obsessed with this?

You are an irritant, Eusebius McKaiser, for questioning my lament that comrade Tony Yengeni did nothing wrong and received a raw deal by having to serve time in jail? I won’t even deign to respond to the uncomfortable truth that comrade Tony had, in fact, admitted to lying to Parliament about the matter. In any case, surely the real point here is that Radio 702 is run by people who have historically hated the ANC?

As I said to your colleague Clayton Manyathela, I’d have been happy to answer you if you worked for Africa World View. As I’ve said publicly, I’m unafraid to report that I’ve had meetings in the past to discuss a media that would give the ANC unmitigated space to put its policies forward.

So what if my son-in-law accepted work with Des van Rooyen, and was plucked from obscurity to do this shady job? How is this linked to the fact that I alone of the top six did not distance myself from the midnight Cabinet shuffle which led to the Weekend Special assuming office? Again, let me try to obfuscate the matter by saying that in fact, I warned him not to take the job because we all know that Treasury is being run by a cabal.

I hate all of you at Mail & Guardian, because you caused me such pain by printing that story in 1998 about how I misused public funds by bringing my lover along for a government trip to Portugal. I’m not sure whether I hate you more for uncovering that story or, in the process of reporting on it, on disclosing that the provincial department I was in charge of at the time was the subject of gross mismanagement.

Oh business, where do I begin with you? We know that you prefer to invest elsewhere. How unfair of you to challenge whatever we did under the Zuma Administration. The reason our relationship is damaged is not because of us, it’s because of your anti-Zuma rhetoric in years past. You get on so well with Rob Davies, so one has to ask… is it a race issue? I’m just saying…

And finally (for now), let me say this to you, Samkele Maseko: you are just a journalist. What I should have said to you, just for emphasis, was what I said to Fifi when she crossed me: you are not even a human being.*

The ANC's Jessie Duarte to @samkelemaseko: "You are just a journalist!" Gives us a fair idea of what the governing party thinks of media freedom and the role of the media in a democracy.

I’m not sure why we care so much as South Africans about Jessie Duarte. Of course, I’m being facetious, because this odious woman is arguably the second most powerful person in the country at present, and unfortunately we probably won’t see the back of her for several years to come.

But I take comfort from the fact that, when we are finally rid of her from political life, she will not be remembered for anything much. Her long and dedicated service to the ANC over many decades, her apprenticeship and time spent under Beyers Naudé, or the story of how she was recruited by Albertina Sisulu herself, all of this will all be forgotten under the rotting detritus of a failed and corrupted ANC which she presided over.

Instead, she’ll be remembered, with little fondness, as the person who allowed corruption and malfeasance to take hold of the House of ANC from within, because all she was concerned about was maintaining the façade of the outside.

Duarte’s method of maintaining this façade was substantially by being Jacob Zuma’s chief protector, while the country rotted. For nine long years, she stood by and did nothing with the opportunities presented by either Nkandla or his treasonous nuclear deal, and as his unchecked Gupta-bidding and the hollowing out of the criminal justice system took hold. By the end, while all the world knew of his rampant looting and disdain for the long-term development of the country, her support grew all the more irrational. As late as last year, she was portraying him as a victim of the media and refusing to admit his mendacity. South Africa could have looked very different if she had had the wisdom – and courage – to act much earlier.

And finally, she’ll be remembered as a bully, increasingly intolerant as her weaknesses and failings towards the country were uncovered for South Africans to see.

The tragedy of this scolding, vicious person of unsound judgement but ferocious temper will be that in her attempts to hold her party together, she unwisely decided to choose the duplicitous crooks within the ANC over the interests of her country. And no matter how much she tries in vain to bully individual journalists, ultimately history will judge the odious Ms Duarte harshly for it. DM