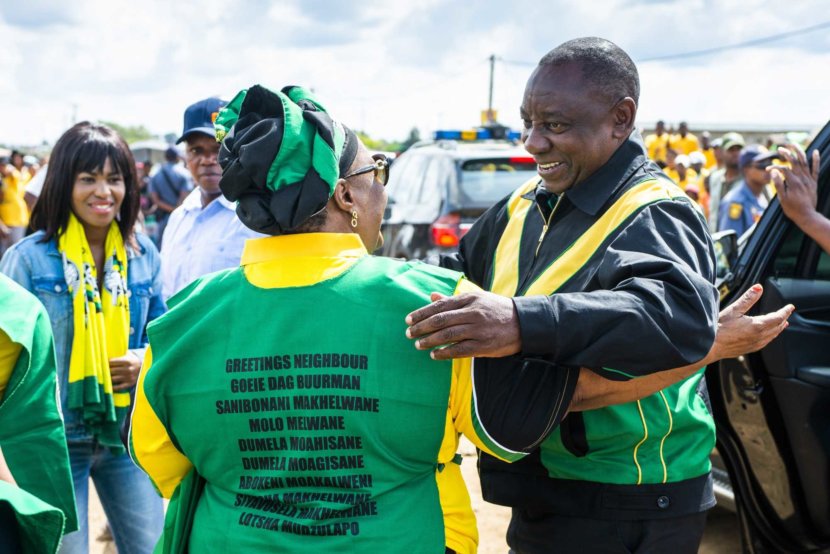 EDINBURGH — In one year, Cyril Ramaphosa has notched up considerable successes in his campaign to reverse economic decline that set in under his predecessor, Jacob Zuma. President Ramaphosa has axed graft-tainted politicians, starting with 10 cabinet ministers in February last year. Ramaphosa has also fired bosses of state organisations, including last week: Nomgcobo Jiba, deputy national director of public prosecutions, and Lawrence Mrwebi, the special director of public prosecutions, who are accused of accepting bribes. He has made it his business to get in touch with residents from all sectors, participating in walks to re-connect the ANC with citizens. Ramaphosa has also reached out to international investors, as he works on trying to rev up the country’s economic engine. His efforts are likely to bear fruit for the ANC in the elections next week, says analysts. However, there’s a big question mark over whether he is getting the balance right between fixing the country and keeping his ANC comrades on side, as it is the latter who hold the power to keep him in the president’s seat for the long haul. – Jackie Cameron

Ramaphosa Can Win Over His Country. What About His Own Party?

(Bloomberg) – South African President Cyril Ramaphosa disrupted his election campaign schedule earlier this month to rush to Alexandra township when he learned that residents there were burning tires and barricading roads to protest squalid living conditions. He told them they’d been heard.

“Your message has gone through the whole country, that you are sick and tired of poor service delivery,” he thundered to thousands of cheering supporters in a speech mostly in the Sesotho language. “You as people of Alexandra want people who will serve you better.” He blamed most of the problems on the opposition Democratic Alliance, which has run Johannesburg, including Alexandra, since 2016.

That Ramaphosa could generate so much enthusiasm even though his African National Congress has governed South Africa for 25 years shows how he’s restoring faith among voters deterred by predecessor Jacob Zuma’s scandal-marred, nine-year rule. Opinion polls indicate many of the party’s traditional supporters who boycotted a 2016 municipal vote have returned. The ANC is expected to easily maintain its monopoly on power in the May 8 national elections, albeit with a slightly reduced majority.

His own approval rating is 60 percent, while his two main rivals, Mmusi Maimane, the leader of the centre-right DA, and Julius Malema, who heads the radical Economic Freedom Fighters, polled 42% and 38% respectively, a survey commissioned by the South African Institute of Race Relations shows. And 55% of 3,431 adults canvassed late last year by the University of Johannesburg’s Centre for Social Development expressed trust in the presidency under Ramaphosa, 66, compared with 26% under Zuma.

“When Cyril Ramaphosa was here, it’s when I realised that something is about to change,” said Tshepo Dichaba, 19, who runs a barber shop from a curb-side shack in Alexandra. “It’s easy to believe him, unlike Zuma. If he told me he was going to build houses, my first thought would be yes, he will.”

Despite his popularity among the electorate, Ramaphosa’s hold on the ANC remains tenuous. The party remains deeply divided following a bruising leadership battle in December 2017, when he took over the helm of the party from Zuma. Several Zuma allies who’ve been implicated in graft inquiries continue to occupy top posts and could try to topple Ramaphosa in an internal vote in 2022.

“The danger is not the outcome of the forthcoming elections,” said Sethulego Matebesi, a political analyst at the University of the Free State, who rates Ramaphosa as the best leader the country’s had since Nelson Mandela stepped down in 1999. “The danger for South Africa is what is going to happen in the next elective conference of the ANC. There is a absolutely no guarantee that Cyril Ramaphosa will come back after five years for a second term.”

And investors remain skeptical that Ramaphosa can push through such promises as to revive the flagging economy and rein in runaway government debt. Business confidence is at a two-year low, the nation’s final investment-grade rating is hanging by a thread and the rand has dropped almost 20 percent against the dollar since he took office, battered by power blackouts and lacklustre growth.

Ramaphosa’s broad-based appeal, on display on scores of campaign stops across the country, is underpinned by his experience in the uppermost echelons of politics, business – and labour unions.

He founded the National Union of Mineworkers and led the nation’s biggest-ever mining strike in the 1980s, then became the ANC’s secretary-general, helped negotiate a peaceful end to apartheid and headed a panel that drafted South Africa’s first democratic constitution.

After losing out to Thabo Mbeki in the contest to succeed Mandela as president, he spent 14 years in business. He amassed a multi-million dollar fortune by securing the McDonald’s Corp. franchise in South Africa, and also founded an investment company that accumulated stakes in platinum mines operated by Lonmin Plc, and a coal-mining venture with Glencore Plc. Among his hobbies: He owns a buffalo and antelope ranch and breeds long-horned Ugandan Ankole cattle.

“He is a son of the soil, understands farming and understands what has to be done to correct the course the country is on”

Ramaphosa showed his dexterity when he addressed about 250 mainly white farmers and businessmen on a wine farm on the outskirts of Stellenbosch near Cape Town. He assured them that people who’d looted state funds would be jailed and the ANC’s plans to change the constitution to make it easier to seize land without compensation will be sensibly implemented.

“I believe that Ramaphosa is the one who can save South Africa,’’ said Beyers Truter, 64, a wiry, bearded wine farmer who attended the gathering. “He is a son of the soil, understands farming and understands what has to be done to correct the course the country is on.”

White South Africans, who account for about 8 percent of the nation’s 57.7 million people, have mostly tended to back the DA.

Since assuming the presidency in February last year, Ramaphosa has fired a number of Zuma’s most inept ministers, replaced the boards and executives of mismanaged state companies and secured pledges of billions of dollars in new investment. But he’s struggled to reignite economic growth and reduce a 27 percent joblessness rate. Bloomberg’s Misery Index, which sums inflation and unemployment outlooks for 62 nations nations, shows South Africa has the third-most miserable economy, after Venezuela and Argentina.

Paramedic Godfrey Mosoaka, 35, is among former ANC supporters who hasn’t bought into Ramaphosa’s promise of a “new dawn.” He was among a 400-strong crowd on a dirt field in Caleb Motshabi, a sprawling settlement of tiny metal shacks and cinder-block homes on the outskirts of the central city of Bloemfontein, to hear Ramaphosa’s pitch on April 7.

“There are no services, they are not doing anything for us,” Mosoaka said, pointing to a track alongside his house that had been in reduced to a muddy swamp by heavy rains. “They are taking care of themselves. Twenty-five years is more than enough.” He plans to boycott the vote.

Thomas Lidebawe, 64, a retired plumber in the crowd, said he was convinced the president can put the country back on course if given more time.

“Ramaphosa is better than Zuma,” he said. “With Zuma, there was just corruption. That time was problematic. Now things are better.”