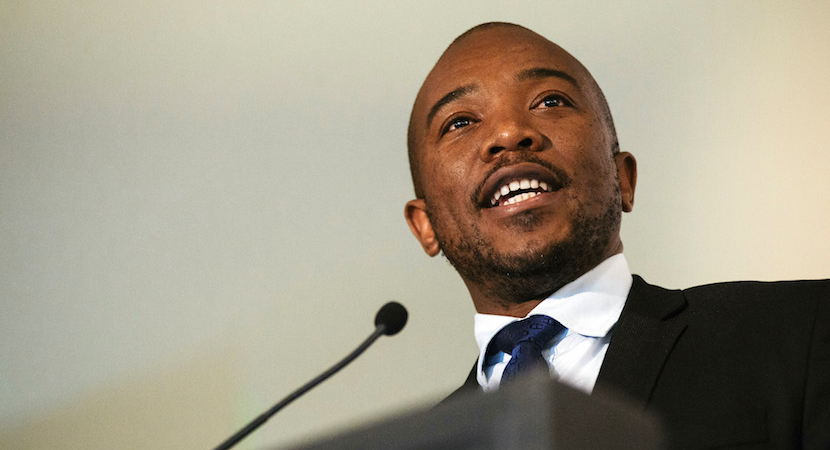 CAPE TOWN — As we shift into higher pre-election gear, DA leader Mmusi Maimane, tackles the increasingly popular “Cyril the Saviour” narrative, reminding us how beholden to economically-stagnating unions the ANC alliance is and how much more a strengthened ruling party would cost us. He flights the possibility of coalitions besides the much-feared ANC-EFF one, which he says will almost certainly herald further Constitutional changes and tear apart SA’s fledgling but so far resilient democracy. Seeming to play on the ANC’s constantly blaming apartheid for all our current evils, he labels the dysfunctional basic education system and rampant unemployment as “crimes against humanity,” promising amended labour legislation and an end to cadre deployment should the DA seriously improve it’s showing at the hustings. When it comes to joblessness and the intrinsic causative blockages which the ANC seem blind to, Maimane cites the DA-run Western Cape as creating more than half SA’s jobs in the past 12 months – with just 12% of the country’s labour force. It looks set to be a robust campaign, given how much is up for grabs. – Chris Bateman

In my newsletter last week, I interrogated and debunked the theory that Cyril Ramaphosa needs a bigger mandate in 2019 so that he can fix the ANC, and by extension (so the argument goes) the economy. Now I want to debunk the equally ill-considered theory that the ANC needs a clear majority so that it isn’t forced into coalition with the EFF.

This theory was articulated last week by influential commentator Max du Preez in a radio interview:

“If by April next year it seems to me that the ANC could come in under 50% or just over, I will bring out a strategic vote for them on a national level… because… if the ANC gets 45% next year … the only possible alliance partner in our current political climate would be the EFF.”

“a weakened ANC is ripe for EFF reinfection”.

Let’s put aside the obvious problem that dismal past performance should not be rewarded with re-election. No healthy democracy would return a political party to power that has grown the number of unemployed from 3.7 million to 9.8 million, lost the nation R500 billion to state capture, put its economy into recession, and produced an illiteracy rate of 80% amongst 10-year-olds.

If South Africa is to develop a culture of accountability, we need to hold corruption and poor performance to account, not reward it. If the ANC is returned to power in 2019 with a resounding majority, it would deliver a body blow to our democracy.

Let’s also put aside the possibility that confidence in Ramaphosa is based on blind hope rather than on any rational assessment of the facts to hand. (I’ll discuss that in next week’s newsletter.)

The notion that we must give the ANC a clear majority to avoid an ANC-EFF coalition relies on the assumption that the ANC would choose to go into coalition with the EFF over the other available options. But other options do exist. An ANC-EFF coalition is not the only possibility.

If the assumption (that the ANC would go into coalition with the EFF) is correct, it suggests that the ANC’s values, ideology, interests and policy positions are more closely aligned with the EFF than with other parties. If this is the case, the ANC is the last party we should vote for if we want to protect our nation from EFF-style politics. Instead, we should strengthen the only bulwark against this style of politics: the DA.

If everyone follows these commentators’ advice, and the ANC is returned to power with a strong mandate, there will be a real possibility that together the ANC and EFF will achieve the required two thirds mandate to change our Constitution. This cannot possibly be in South Africa’s best interest.

In August, the ANC and EFF went into coalition in Nelson Mandela Bay to wrest the metro from DA mayor Athol Trollip’s capable, honest administration and return it to the same corrupt cabal that emptied the coffers before 2016, as detailed in Crispian Olver’s book How to Steal a City.

In the matter of the VBS heist, the ANC and alliance partner SACP both received money from VBS and the evidence suggests the EFF also benefitted, at the expense of the rural poor of Limpopo.

Just last week, the ANC supported the EFF’s motion in the Constitutional Review Committee to change the constitution to allow for expropriation without compensation.

If the ANC comes in under 50% in 2019, it would end the ANC’s disastrous run of hegemonic, majoritarian liberation movement politics and usher in a new era of coalition politics and political accountability. Public representatives would know that corruption and poor performance are punished at the ballot box.

Ramaphosa’s faction would have good reason to split from the ANC and go its own ideological way. A final split in the ANC would bring about a real realignment of politics, in which all of us who share a respect for the Constitution and a commitment to honest, people-focused government could work together to get South Africa back on track.

South Africa’s redemption lies in a split ANC, not a strong ANC. Yet this split will not happen while we focus on saving the ANC rather than on saving South Africa.

The main problem with a focus on saving the ANC, regardless of who emerges as leader, is that the ANC is beholden to Cosatu for its support. The ANC-Cosatu alliance sustains itself through maintaining an insider-outsider economy in which the insiders – those with jobs – enjoy the protection of restrictive labour legislation.

The ANC-Cosatu alliance is a fundamentally insider-driven organisation, guaranteeing SADTU control over large sectors of our education department and putting reforms such as reducing the public sector wage bill strictly off limits.

This is why Carol Paton in her latest column rightly argues that even under a Ramaphosa-dominated ANC our most pressing problems will endure: unemployment and especially youth unemployment will remain high, basic education will remain dysfunctional, and the public sector wage bill will remain bloated. All of which will keep the handbrake on our economy.

A “strategic” vote for the ANC may be attractive to insiders including those who fund the ANC’s election campaign, but it will keep the poor, hungry, unemployed outsiders out and perpetually dependent on the state.

To build an economy that works for everyone, we need a coalition based on a commitment to breaking down the barriers that keep so many people locked out of the economy. We need to stare the unions down and implement real reforms, and we need to do this urgently. We cannot afford another five or ten years with a dysfunctional basic education system and unnaturally high unemployment, both of which are crimes against humanity.

The DA does not rely on unions for electoral support. Our plan is to break down the insider/outsider divide by changing labour legislation to make it more attractive / less risky for businesses to create jobs and easier for small businesses to start and grow. We would strengthen and capacitate education departments by ending the system of cadre deployment that keeps SADTU so powerful. And we would focus on building a lean, capable state that delivers quality services to all.