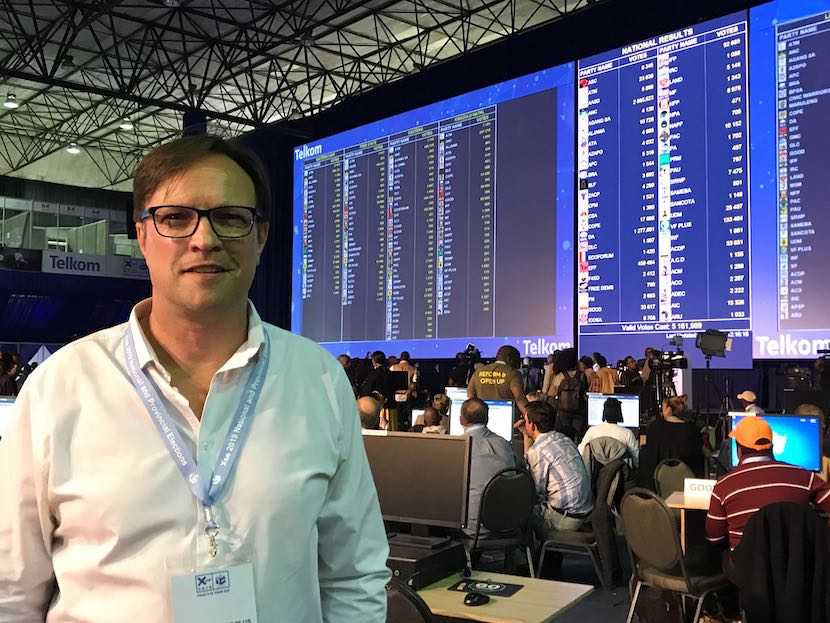 PRETORIA — With over half of the results in South Africa’s sixth general election now in, the Freedom Front Plus has a surprising strong showing. It is a party that openly says it represents white interest in the country, but it has seen growth among Afrikaans speaking members of the coloured community and more recently black people in the townships have started canvassing members for the Freedom Front Plus. Here’s the chairperson Anton Alberts. – Linda van Tilburg

You seem to have quite a good showing from early results. What do you ascribe this to?

It’s looks like it’s a good showing. We’ll need to see if the trend continues. We have to be careful not to make too much of it at this stage. But we have seen before the election that there is a groundswell of support for our party. Many people are not happy with the DA anymore. They are moving away from the DA, conservative voters but also voters that like our economic policies because we are free market-oriented party. We believe that the obstacles in the fair market must be removed, including any race-based administration, like affirmative action so that we can get our country going and let the economy fire on all cylinders. We will also create a situation where there is more tax incentives. You know more tax incentives for small businesses, so we can grow small businesses in this country. I think many people, what we have seen within the middle class and upper middle class, people who have their own businesses like that a lot and then of course some people from the poorer communities who like our policies as well regarding cultural protection, minority rights and so forth.

Mostly white and mostly Afrikaans people you could say. It might have changed a little bit but we also target the colored community. Afrikaans and English-speaking community and we do find that we have English speaking people, Conservative English people now voting for us as well. So most of our voters are colored and white but we do have a very few black people who are just so tired of what’s happening in this country, looking for a completely different alternative and started canvassing out of the townships. So what we did we came to scour the townships to see if there are any points and we are actually doing quite well there.

In the initial results in which Province did you do very well?

So far Gauteng is very steady and doing well. Most of our votes come from Gauteng, about a third of the party’s votes in the West Vaal scattered all over the country. It looks like the Limpopo and Mpumalanga is doing well. We’re getting seats there that we didn’t have before this stage and North West is also doing well. We are looking at almost a second seat there. So in the Northern Cape we are actually looking at a seat there as well. We have seats everywhere except for KwaZulu Natal and Eastern Cape. So the support is coming from all over the place.

As your campaign said just to translate it, Slaan Terug. So fight back. So what are you fighting back from?

Well we are asking people to go fight back against corruption and everything that the ANC has dished up in this country with their votes. Some people have taken issue with us and they say but it’s a very aggressive position to take but it’s not designed to be aggressive in a physical sense as we see with the EFF in Parliament. Amongst other things but we are in that environment. But if people read our manifesto, they can see the whole context of fight back. We are saying it is time to fight back. Time to stand and say we have had enough of the looting of the coffers of the Treasury. Eskom that is going to fail. We don’t know if we are going to have load shedding again after this election. Are they able to keep the lights on now but I don’t think it is sustainable. It’s all the ANC’s fault. So it’s time that we strike back and we get to a point where we can form a coalition government with other like minded political parties.

So why do you think people moved away from the DA to you?

Different reasons. The classical liberal grouping. Some of them have moved to us due to our position on the free market. I think some of them also moved to the South African Capitalist Party and so they were not happy with what’s happening in the DA regarding economic policies but also on race. What the DA has been doing and they don’t want to admit it but they have been basically working with quotas and quoting people based on race which is against the thinking of the free market liberals. You have to judge people on an individual character and not the colour of their skin. So many of those people have left but we have also found that with Mmusi Maimane, he has taken a position very similar to the ANC and the EFF on white privilege and those type of things that white people did not feel comfortable with the DA and were moving into a place where they can find another home. I think they have looked at quite a lot of small parties. They have looked at ACDP. They looked at COPE and they looked at us and I think most of them decided, when we look at the board now, we are the strongest alternative. That is why we are seeing the growth.

So for business, the business community that we represent. How would you represent us in Parliament if this community voted for you?

First thing we will fight expropriation without compensation with everything in our ability in Parliament and we will even go to court if we have to. We must bring the sunset tours on BBBE affirmative action. We have got to get merit back into the system. Eskom has topped them over because the people with qualifications can run the place and now it’s run by Gupta employees. So we will fight to make sure that the economy is healthy in the sense that there is space to grow. Take the obstacles out of the way and allow the free market to work, except for competition matters you know that there are no monopolies otherwise the free market must run its own course and there must be tax incentives and then we can actually start emulating what’s happening in the United States because whether you like Trump or not, what he has done is he has created an environment where business is doing well and they are doing so well that Canada is actually experiencing the brain drain at the moment because they are going from Canada to the United States and we’ve got to emulate that. That’s the policies that have been proven to work throughout the ages, but unfortunately with the big three parties, The ANC, EFF and the DA all are supporting socialist type projects which will harm our economy and will only redistribute the little that we have without building any wealth and creating no value. So I think from a business perspective, I would dare say that we have one of the best policies out there apart from the ZACP.

Do you think it might change? Will it be an early run? Just a quick last one.

Ja we have got to be careful with the first number. One tends to get very excited when you see good numbers coming up. There is now about 30% counted more or less. So we have got a way to go and also what is very dangerous for opposition parties is that the rural vote comes in and the rural vote tends to be ANC, then it starts suppressing your numbers. We have done a little bit of research; it is a very low voting percentage in the rural areas turnout. So they might not be able to cancel out the city votes and the suburban vote and that will give us an edge for sure.

Thank you for speaking to us.