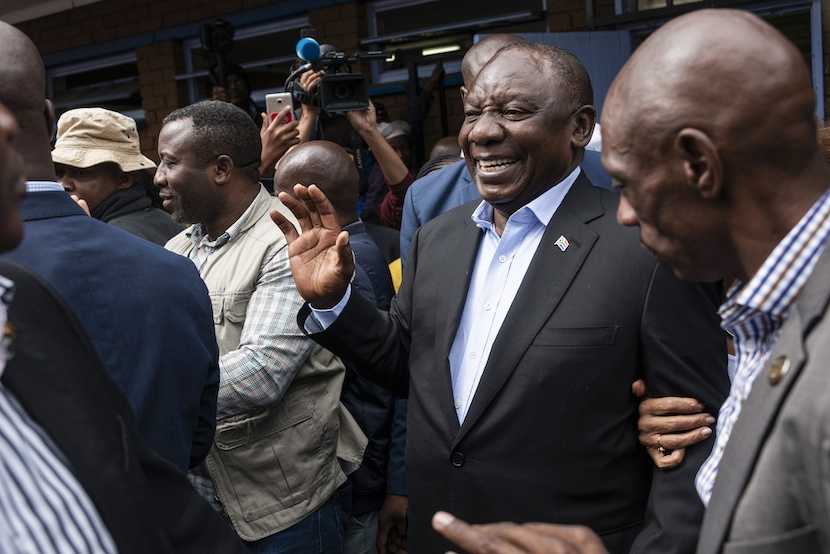 JOHANNESBURG — Our species naturally inclines to the negative. Especially around key moments in the history of a young democracy like South Africa’s. Remember the candle and food accumulators ahead of the 1994 election? Or the forecasts of a Zuma dynasty ahead of the ANC’s 2017 Elective conference? And predictions that SA was going bust and would be begging the IMF for funds? This morning we received a lengthy missive from a long-time Biznews supporter angry that we cannot grasp what a “disaster” it is that Cyril Ramaphosa has been given a mandate to run South Africa for the next five years. And on social media yesterday, DA-supporters used emotion and fear to attack Ryk de Klerk’s fact-based analysis of why a Ramaphosa win would be cheered by the global bond market. But despite hard wiring built over millennia of existential threat, when it really matters, we humans tend to opt for hope over fear. Ramaphosa appreciates this. Relating publicly to Napoleon’s view that successful leaders are “peddlers of  hope”. Helped by the mistaken Project Fear campaign of his opponents, Ramaphosa has won an election the ANC deserved to lose. Now comes the tough part. Cynics say the new ANC boss is all sizzle and no substance. That he won’t be able to cleanse the party and, indeed, is himself destined for the chopping block. They’re wrong. As we’ll see soon enough. Indeed, the ANC’s blunt social media weapon Fikile Mbalula has already spilt the beans on Ramaphosa’s remade cabinet. That is sure to be only the beginning. Hope springs. – Alec Hogg

(Bloomberg) – South African President Cyril Ramaphosa has the full backing of the ruling African National Congress to reduce the size of the cabinet after the elections, senior official Fikile Mbalula said.

“Cabinet will be cut to below 30 positions,” Mbalula, the ANC’s head of elections and a former police minister, said in an interview on Thursday. “A study and a report has been done by the ANC and so it will be a reality.”

The comments come as results from Wednesday’s national election show the ruling party is on course to win a clear majority, bettering its performance in a municipal poll three years ago. That puts Ramaphosa, who has said he wants to reduce the size of the administration, in line for his first full five-year term as president after replacing Jacob Zuma as national leader last year. Currently there are 34 ministers and 35 deputy ministers in the executive.

Mbalula said Ramaphosa is safe as leader of the party but that he can’t speak for “dark forces.”

“All party members are 100% behind him,” he said at the national elections centre in Pretoria. “The party has done well especially after the doldrums we were in before the elections. However, I cannot account for dark forces and what they want to do.”

#Elections2019Results ANC head of elections Fikile Mbalula said if president Cyril Ramaphosa did not win at the party’s 2017 Nasrec conference the ANC would have sunk to 40% in this elections.

Ramaphosa scored a narrow win in December 2017 to take leadership of the ANC and the party remains divided, stirring speculation that a faction allied to Zuma and Secretary-General Ace Magashule may seek to remove him. Magashule has denied the rumours.