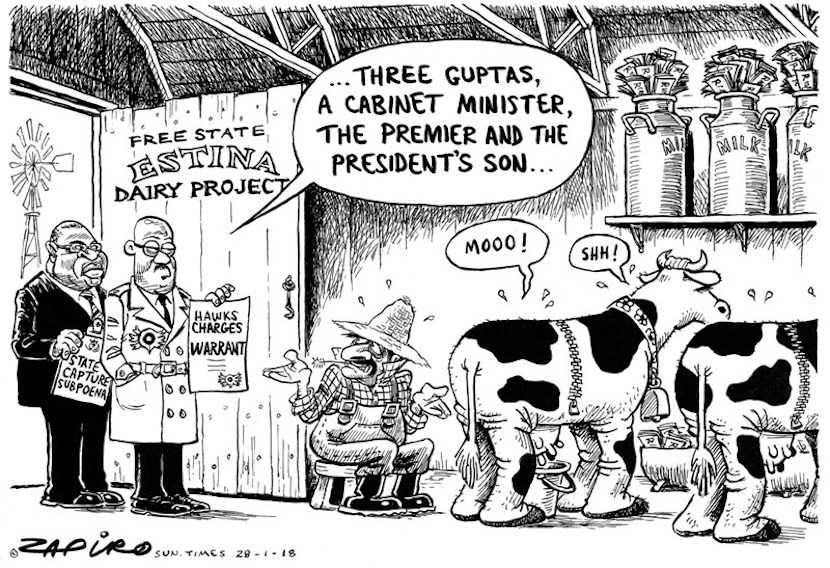 EDINBURGH — Ace Magashule, as secretary-general of the ANC, is one of the most powerful politicians in South Africa. Investigations by amaBhungane journalists in 2017 revealed that Magashule is part of the Gupta network, with his son, Gift, on the payroll of the Gupta family – which played Jacob Zuma like a puppet while he was president. A new book, by journalist Pieter-Louis Myburgh suggests that the amaBhungane revelations were just the tip of the ice-berg. In addition to helping the Gupta family steal taxpayers’ funds, the former Free State premier has the stench of dead bodies wafting around him. He is also a fraud, lying his way into the upper echelons of the ANC by claiming false exile and freedom fighting credentials. The ANC is standing behind Magashule. South Africans of all walks of life, and particularly from the former province he ran, have agreed he is a gangster, some even calling him Secretary General wa Tsotsi, as anger grows that the ruling party is not excising corruption from its ranks fast enough. – Jackie Cameron

The body of Igo Mpambani after he was killed in Sandton in 2017. The cops found R1m in his Bentley. Igo was en route to Bloemfontein. Leaked files unpacked in #GangsterState link #AceMagashule to cash from Igo’s R255m ‘asbestos audit’ in the Free State. [pic. Sandton Chronicle] pic.twitter.com/0V4VxtHPJH

South Africans have reacted with outrage following fresh revelations that catapult ANC secretary-general Ace Magashule to the top of the state capture tree.

The ANC has accused investigative journalist Pieter-Louis Myburgh of fabricating information and claims his book is part of a media conspiracy to nail the party ahead of elections in May.

She tells how Pieter-Louis Myburgh’s new book opens with the mysterious assassination of tenderpreneur Igo Mpambani in 2017.

Turning to Magashule’s earlier life, Myburgh discovered that Magashule’s version of his heroic anti-apartheid activities is “replete with half truths, ample embellishment and a few outright lies”.

Contrary to his public claims, continues Davis, Magashule was not a founding member of the Congress of South African Students (Cosas) in 1979, nor the United Democratic Front (UDF) in the Free State in 1984.

“Neither was Magashule arrested and charged with ‘high treason’ as a result of his involvement with student protests at Fort Hare in 1982, as he claims – though he was charged with public violence. He also spent five months in exile, not 18 as he later claimed.”

For BizNews visitors, the news that Ace Magashule is up to his eyeballs in corruption is another reminder that President Cyril Ramaphosa, who has vowed to clean up on graft, has an enormous and perhaps impossible job on his hands.

The Magashule reports come as Ramaphosa is grappling with allegations about his own son taking advantage of the Ramaphosa name to generate income. Andile Ramaphosa has been involved with Bosasa, a company that paid huge sums in cash to Dudu Myeni, former SAA chair, with the intention of passing this on to former president Jacob Zuma – who is her close friend.

So when will #anc suspend #AceMagashule? When are the #Hawks getting involved? Do we wait 10 years again and then it gets whitewashed? We know this movie. @MmusiMaimane

What is SCARY is ANC defending Ace Magashule against corruption allegations just as it did Zuma few years ago, a decision but regretted in 2017.

Ace Magashule fought back, taking to Twitter to defend himself against the allegations in the Myburgh book – but the Twitterati came down on him like a ton of bricks.

Before long, the moniker General wa Tsotsi looked like it could stick.

From where I'm sitting, the only fake news is your tweet.

Ace you and many of your cadres have sold out our freedom for a few bucks ,your liberation journey must have taught you buggerall now you and your movement comes across like s greedy bunch of stupids ,you messed up Mandela's struggle

Hide or report this:

To be honest with you Mr Ace as I am Free State born and bred, I'm dissapointed and I can look you in the face and tell you that you're selfish,greedy and very corrupt individual who only knows people when in need of their votes.

On Facebook, Jonathan Brinkman told Alec Hogg’s friends: “Apartheid screwed over the black population and other ethnic groups. These guys are screwing everyone!

Ryan Purvis was relieved to hear that there is no racist motive for corruption among the current crop of ANC leaders, saying:  “At least they are screwing all South Africans equally!

On BizNews, responding to the first review of the Pieter-Louis Myburgh book on the gangster state, visitors shared their disappointment that corruption continues to dominate the picture of South Africa.

Injala Apera said of Ace Magashula: “Just one of the many ruthless tsotsis wrecking the place.”

It’s being run as a criminal enterprise.Which is why governance is in the state it is.The primary focus is wresting money out of the public purse by ever increasingly complex means, in fact I would daresay it’s their only focus as maladministration becomes the order of the day everyday under their tenure.When their constituents are mentioned it’s merely to placate them and give the appearance of representation all whilst the main focus is how much the next scheme is bringing in.Unfortunately we are enabling this all through tax’s which the mafia’s thugs and enforcers under the auspices of the mantle of SARS have proven very adept at leveraging out of the public while painting a benevolent picture of roads , nurses infrastructure tax is supposed to provide when in fact it’s more of a malevolent scenario with tax’s being redirected to Casa del Luthuli and services and infrastructure collapsing due to blatant theft.

Meanwhile, giving the game away that Ace Magashule really is a Jacob Zuma accolyte, the ANC secretary-general retweeted the following in support of his former boss amid the outcry about his alleged dirty deeds.

This young lady had written to the Tobeka Madiba Zuma Foundation. She wrote that the only thing standing between her and her graduation ceremony tomorrow was an outfit and bus fare. I had the honor of meeting, congratulating and handing over our gifts to her this past weekend. pic.twitter.com/4hxKDMAhYk

Here’s what the ANC says about reports that Ace Magashule is corrupt: