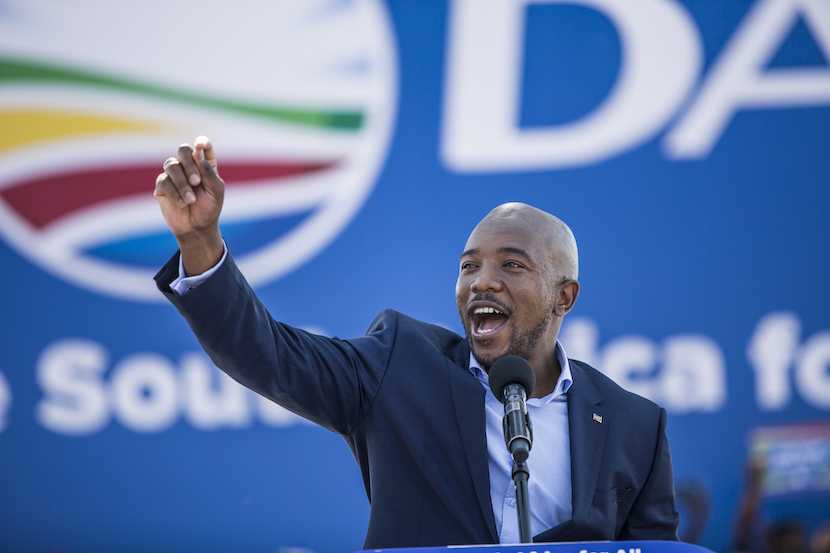 You’ve got to love him. Acerbic and suffering no fool gladly, RW Johnson speaks his mind, one replete with experience and political knowledge. He makes some telling observations in this piece which helped me realise he’s exactly the kind of person that those whom he threatens, demonise and dismiss as an ageing conservative. You have to ask why. He backs up his opinions on why the DA’s fortunes are waning with solid facts. It would be fascinating to hear DA leader Mmusi Maimane’s rebuttals, standing as he does firmly in Johnson’s cross-hairs. As gladiatorial and politically incorrect as Helen Zille can be, it’s hard to argue with Johnson’s assessment of her and the irony of her legacy when juxtaposed with the current fast-evolving manifestation of the party she once helped define. Helen Suzman would be proud. The scrupulously honest, fluent Xhosa-speaking former Western Cape Premier was admired by ANC-supporting township dwellers, increasingly so as they watched their leaders raid every public coffer in sight. There’s no small irony in the DA’s internal split mimicking the ANC’s as its’ leadership moves left of centre towards the ruling party’s world-view. Especially when it comes to singling out genuine liberals and Afrikaners for different treatment. Both groups are increasingly shifting to new middle ground. Story courtesy of PoliticsWeb. – Chris Bateman

Strange days in the DA

The DA is currently in a fairly toxic state. There are attempts to claim that its reversal on May 8 was really a sort of victory, allowing it to get rid of white racists. This is nonsense. In fact the DA owes its Afrikaans supporters a sincere apology for this libel. Everyone knows that the DA has failed to stand up for Afrikaans language and cultural rights despite their guarantee in the Constitution.

The way the DA dealt with the Schweizer-Reneke case was simply shameful. Some DA MPs have even suggested that it is the electorate that is at fault and must search its conscience for having voted as it did. This reflects a terminal arrogance and echoes Bertolt Brecht’s famous line after the 1953 risings in East Germany that if the people were against the government clearly one needed to choose a new people. (I write as a liberal who is a member of no party. Personally, I split my vote on May 8.) Despite all its talk about being a party that believes in personal responsibility and that actions have to have consequences, the party is trying its damnedest to ignore those precepts. But whatever it says, the problem will not go away and will continue to stew within the party’s stomach. In any normal party in Britain, Australia, Canada or Western Europe the whole leadership group of the party would have gone by now.

The point is this. The party has gained at every election since 1994. This has given it a great sense of momentum, of confidence that “the future belongs to us”. It is rather like the German Social Democrats in the 1960s whose vote crept up at every election so the party referred happily to “Comrade Trend”. This was wonderful for morale, it helped get the party activists keen, helped pull out the vote, it helped everything. And it was precisely this that was lost in the DA’s recent performance. The moral and psychological damage is very great. And unless the party can really live up to its actions-mean-consequences principles, it will pay a further fearsome price in the 2021 local elections.

You can tell a lot about a party by the way its best members behave – and are treated. David Maynier, who has been a first rate shadow minister of finance and whose organisational efforts did much to aid the DA’s recovery in the Western Cape, has decided to leave Parliament for provincial politics. Gwen Ngwenya, a highly intelligent black liberal woman, resigned her important position in charge of policy and is also now exiting Parliament. These are signs that something is terribly wrong. But what does the leadership do in response? It decides to launch punitive investigations into Helen Zille, Michael Cardo and Ghaleb Cachalia for, of all things, their remarks (some of them in jest) on Twitter. This is ridiculous. The idea that what the party needs to do is to crack down on free speech in its ranks rather than look at the really serious problems it faces is simply grotesque.

Mr Cachalia is being charged with having made (apparently) the wrong sort of joke against Eusebius McKaiser. McKaiser is a sworn enemy of the DA and is strictly a one-trick pony: every article, every broadcast is merely another anti-white fulmination. He has no other suit. Moreover, he has a colossal ego, often referring to his own “excellence”. Let the wretched man defend himself. Michael Cardo is the author of an admiring biography of Peter Brown, a real icon of South African liberalism. The idea that he too needs punishing for a joke he has made is, well, simply silly – especially since the DA youth leader who so unjustly condemned a harmless young white teacher has not been punished but promoted. Why not devote this energy to look into some of the party’s real problems? For example, during the campaign the DA’s spokesmen repeatedly suggested that their own internal polls showed the party making useful gains. These polls were, of course, always kept secret. I was conducting polls myself and listened to such claims with entire disbelief. Everything I was looking at showed the DA losing ground very badly indeed. At one stage our research in the Western Cape showed the DA at 43.8%, with the ANC-EFF vote over 50%.

In Gauteng at the same stage our poll showed the DA and EFF absolutely level at 19.2% each. But those were February numbers in what turned out to be a volatile campaign. In fact the very worst was averted both by heroic organisational efforts in the last week and by the sheer “homing instinct” of many voters who returned, however reluctantly, to their old party.

Every political sociologist knows that this is simply normal practice. At the same time DA activists working on registration reported that there was entirely apathy and disaffection. This was also visible in the focus groups we ran. At no stage did our polls show the DA gaining nationally or with any real hope in Gauteng or the Northern Cape. Our final estimate was a DA vote of 21%, which was pretty exact. In other words, I simply do not believe all those claims made by DA spokesmen about what their private polls were showing. Instead of going in for schoolyard inquiries about who said what on Twitter, it would be more sensible to ask who exactly was responsible for these absurdly optimistic predictions. Was their methodology wrong or were they simply lying?

There is an even more significant point about the leadership’s apparent determination to go after Helen Zille. Again. Ms. Zille no doubt has her faults, as do we all, and she is often outspoken. But she holds no party post or position and surely any properly liberal party would allow its members to be outspoken. No one in their right mind believes that Zille is a racist, after all. There is, in addition, something deeply disturbing about this prolonged pursuit of a woman who has worked so hard for her party. One cannot imagine Colin Eglin or Van Zyl Slabbert setting up investigations into Jannie Steytler or Tony Leon doing the same to Zach de Beer. This is the liberal pantheon and Ms Zille has earned her place in it.

More significant still, look again at the Western Cape. It is not so long ago that the ANC ruled the Western Cape and the city of Cape Town too. No one who lives here can forget that period under Nomaindia Mfeketo when corruption scandals erupted almost weekly, when plans were made to abolish the fire service so as to free up more funds for more cadre deployment. Since then Ms. Zille managed to displace the ANC, first leading a coalition and then winning a clear and large majority for the DA. In that period she gained an award as World Mayor of the Year in 2008, something no other South African mayor of any party has done. She followed that with ten years as Western Cape premier. In that entire period the Western Cape has come top on every indicator as by far the best run province. At no point in that entire decade has there been even the slightest corruption scandal. The DA’s whole claim to better and cleaner governance – its main selling point – rests very largely on what Ms Zille achieved as mayor and premier. It is simply indecorous for the DA leadership to keep launching attacks on Zille while continuing to boast at every opportunity about the Western Cape’s clean audits, its lower unemployment rate, its higher economic growth rate and so on.

Ms Zille has her faults but I have been a practising political scientist for over fifty years and have studied the politics of many countries. My rough and ready rule is that if you have a public representative who is rigorously honest, works like a demon and is unafraid to speak their mind, hang on to them for you won’t do better. This is why the citizens of Chicago voted without fail for William Daley (father and son) and why the citizens of Bordeaux voted without fail for Jacques Chaban-Delmas.

Maimane must simply distance the DA from Zille, if embarrassed by her; not curb her freedom of expression!

However, there is a political point which goes far beyond that. It has escaped with little comment that the ANC vote in the Western Cape fell yet again in 2019. Yet we all know that for the past several decades there has been an immense inward flow of Africans from the Eastern Cape into the Western Cape – as well as many Africans from the rest of Africa. Simple demography would have led one to expect a steadily increasing ANC vote in such circumstances. In fact the very opposite has happened and the ANC, which once ruled the province, is now down to 28.63%. That is to say, Ms Zille has been so successful that she has changed the province’s political culture-– is there anywhere else in South Africa where a heavily increasing African population goes hand in hand with an ANC vote falling at every election while the DA scores around double the ANC total? I was very struck by this in the polling I did here in 2017 when we found that even many loyal ANC voters said they thought Zille was a pretty good premier. Casual conversations with foreign blacks in Cape Town suggest that they share this opinion even more heavily.

This surely is the point. Zille’s success here has not only won over many ex-ANC voters but has clearly neutralised the still remaining ANC electorate. This is the model which the DA should be exploring in detail and trying to emulate nationwide. To lead yet another vendetta against Ms Zille is not only unworthy. It is the wrong fight in the wrong place at the wrong time. Whoever is making these absurd decisions not only needs to grow up but, very probably, ought to resign.