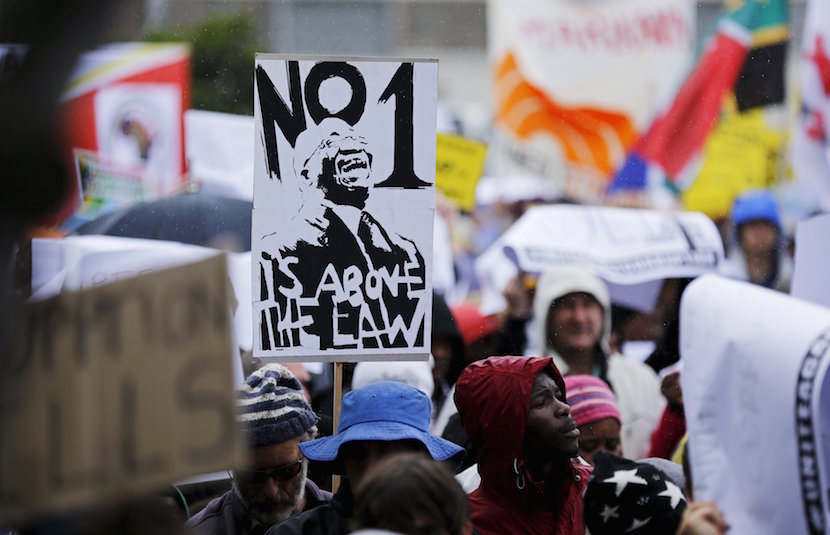 Steven Nathan, founder of 10X Investments, joined the BizNews Power Hour as co-host today where a discussion ensued with BizNews founder Alec Hogg on consequences finally being seen in South Africa – the ‘Republic of no consequences.’ Former President Jacob Zuma’s sentencing to 15 months in prison earlier today was something that many of us had resigned ourselves to believing would never happen. While it is only for his contempt of court – a mere tip of the iceberg which makes up his mountainous volume of transgressions – Nathan hopes that this will facilitate further investigations. With corrupt individuals being held to account in the private sector as well – perhaps this is the beginning of a turning tide in South Africa. – Nadya Swart

Steven Nathan on Jacob Zuma being sentenced to 15 months in prison for contempt of court:

Yes, without a doubt [it’s a start]. It reminds one a little bit of how they got Al Capone; they couldn’t get him for the bootlegging and the violent crimes. I think they got him on tax evasion. But what really matters is if you can at least bring culprits to book somehow, and I think that the vast majority of South Africans would be really happy to see Jacob Zuma imprisoned for some length of time. And maybe that also facilitates further investigations and hopefully convictions of many of the allegations that he has been accused of.

On Nkandla and Zuma’s presidency:

It’s kind of; where do you look to focus on the destruction that was caused under the Zuma presidency? You know, we look at GDP growth where beforehand, I think many of us forget, we were actually running budget surpluses in South Africa. Now, obviously, it’s not just the president and the government of the day – they are economic factors at play. But under Trevor Manuel and his leadership of finance – we were actually running budget surpluses and our debt was very low. So we were actually seen as a very responsible and attractive emerging market investment destination.

Then you fast forward over an almost 10 year period and you look at the devastation from an economic growth perspective, from an increase in unemployment perspective, from state capture, from load shedding. As you say, then you can look at Nkandla – those sort of outrageous numbers. The big picture is really, really disturbing. And maybe on a more lighthearted note, I remember speaking to a friend of mine about Nkandla, about the outrageous cost, and he said; ‘Well, you know it’s not so much the money that really irritated me. It’s just that surely they could have done a better job with all that money. Surely they could have actually improved it.’ So one has to also see the lighter side of it.

But the sheer economic impact… And we are paying for it, because it’s much easier to destroy than it is to build. So it’s easy to kind of get yourself in debt. It’s easy to tear down. It’s easy to milk institutions, but it’s much, much, much harder and takes much longer to get them back to their former glory.

Without a doubt. I think that’s a really important message. We have to start to send strong messages of behaviour that is acceptable and behaviour that is unacceptable. And unfortunately, during the Zuma presidency years – there were really no consequences and no repercussions – and even no threats that if you were involved in state capture or incompetence or corruption, that there was going to be any threat. It just fell on deaf ears. And I think that was very demotivating for all South Africans. And obviously, from an international perspective, when you see that going on and you see the government turning a blind eye to that – then that also doesn’t instill confidence.

Definitely what we’re seeing now with the health minister, with the contempt of court Zuma and even spilling over into the private sector; institutions [are] taking these transgressions a lot more seriously and holding people to account. Because I think if you are in a lawless ‘no consequence’ society, then it’s much easier for anyone to kind of turn a blind eye or to maybe operate in gray areas or do things that you wouldn’t otherwise do if you operated in a society where you know that there were consequences and you know that those around you are also operating on a higher standard. So it’s definitely a positive sign.

Stephen [van Coller] definitely was thrown in the deep end and – even I think from his perspective – he went in knowing there were problems. But I think once he got inside [and saw] the severity of the problems that he uncovered… I think, to his credit, he followed through on that. So I think that it would have been easy to sort of maybe gloss over things, maybe investigate to a certain level. But, Stephen, it seems is really taking this to its final conclusion – to ensure that he unearths, on behalf of EOH and all their stakeholders, exactly what is going on and does a very thorough and proper job, which they seem to be doing.

Unfortunately, it’s a really difficult one. Because firstly, it costs a lot of money to do these investigations. So you’re paying lots of expensive legal fees and fees to unearth it. Then secondly, it takes a lot of management time and executives time to actually focus on these sorts of things, because you don’t want to make any mistakes. So you’ve got to be extra careful. You go into a lot of detail and there’s an opportunity cost, because there’s only so much time, energy and resources you have in the day. That we run the business. Do we think about strategy and how much time do we devote to bringing those to account that have allegedly transgressed against the company? So there’s that.

And then I think thirdly, there’s the reputation issue. It’s right and it’s good to go after these people, but it does stick to EOH. [It] kind of keeps on reminding people about the challenges that EOH has as a company. And I think for clients [and] for staff as well – that is a challenge to go through. So it’s definitely not an easy path to follow. There’s definitely consequences and some downside. But I think it’s the right thing to do from a governance perspective and hopefully [will] bring in those to account. But as I said, I think it’s a bit of a balancing act when you’re running a business – because you’ve got lots of stakeholders.

And obviously one of the main priorities for EOH is to try and recover some of that shareholder value. So to try and get the business stabilised, profitable and growing so that they can add value to shareholders, they can add value to the government as well by paying taxes (because when companies are profitable, they pay a lot more in taxes) and hopefully also create employment. It’s a bit of a sad thing, because EOH – I remember under Asher Bohbot – was one of the very first companies to aggressively go into creating learnerships and job opportunities for people. And they created several hundred jobs where, across their business, they gave opportunities for people without previous business experience. They gave them the opportunity of coming into business. So, it’s sad in that way; that a company that did good in that area overall has kind of slipped up in other ways.