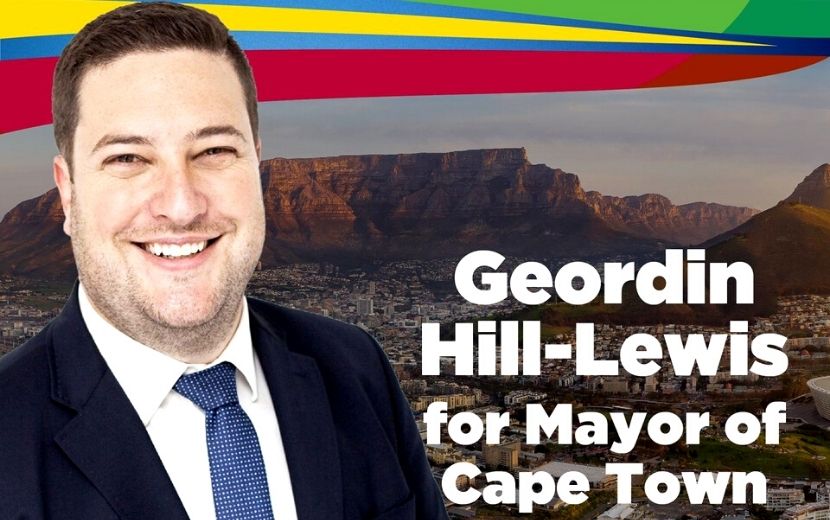 On 23 August, Democratic Alliance Leader John Steenhuisen announced that Geordin Hill-Lewis would be the DA’s candidate for mayor of Cape Town in the upcoming local government elections. If elected, Hill-Lewis – aged 34 – will be the youngest mayor in Cape Town’s history. Hill-Lewis – who became a member of the DA when he was in high school – spoke to BizNews about his passion for politics, the area which he believes is the best place to make a positive change as ‘you can affect systemic change and even a 5% improvement at a systemic level can have a huge knock-on effect for society at large and for millions of people.’ While Hill-Lewis says he understands the emotional impetus behind the Cape Independence movement, he has a different view on how the issues that plague South Africa can be solved – ‘by devolving power to the lowest level of competent, strong, well-run government.’ – Nadya Swart

Geordin Hill-Lewis on his background:

I’m originally from Plett in the Southern Cape. I moved to Cape Town as a young boy, and I’ve lived here ever since. I live in the northern suburbs in a place called Edgemead. I am an economist by training and started getting involved in politics in high school.

I got very involved in student politics and worked in research and in various political staff roles before running for office in Parliament where my portfolios have mainly been in the economy and in trade, firstly, and then in finance the last few years. I am married and have a young daughter.

On why he chose to get involved in politics:

So I think I’m motivated by a need to derive some sense of personal meaning from what I do. I don’t see it as just a profession or a job for a job’s sake. I have to feel like I’m making some kind of positive difference. And I think politics is the best place to do that, because there is so much systemic leverage in politics. In other areas, you can fix one specific policy area or you can make a positive contribution there – and that’s very, very important. I have the utmost respect for people that do that.

But in politics, you can affect systemic change and even a 5% improvement at a systemic level can have a huge knock-on effect for society at large and for millions of people. And so that gives me a huge sense of personal meaning. And that’s why I love politics and why I got involved.

So I’m convinced that the next phase in South Africa’s democratic development is going to be about strong local governments and residence groups doing more for themselves, because national government cannot do and is failing to do so much. And so, as we see this continuing collapse in basic services at a national level, I think that that space must be filled by assertive local governments who have got the wherewithal, the skills, the expertise, the financial resources to step into the gap and to say, ‘We are going to protect our residents from the consequences of these crumbling national services.’

And so I think that’s a very hopeful and exciting vision, because it’s basically saying, ‘We refuse to accept that South Africa’s future for the next decade or for the foreseeable future is one of decline. Instead, we are going to do something about it.’ And the ‘what’ we are going to do about it is to say, ‘We can do a lot more of these things for ourselves and protect Cape Town from that sense of decline.’ And that’s very exciting in things like crime and crime prevention, fighting crime and electricity, in stopping load shedding, in public transport. Even in some economic policy; in getting the economy growing faster than the rest of the country.

So I really think that’s where the future is in government in South Africa. And I’d like Cape Town to be at the forefront of pushing those boundaries and essentially saying to the country, ‘This is a model of how the country can and should work and we are leading the way.’ That’s my platform.

This is not about this is not about isolationism or balkanisation. It is about making South Africa work. I’m a passionate South African. I love this country. It’s my home, and I want it to succeed. But the way that it will succeed is by devolving power to the lowest level of competent, strong, well-run government. I do understand the emotional impetus behind the Cape Independence movement, because people are feeling hopeless about what they see happening in South Africa. And the more they feel hopeless, they look to the one place where things do work and they say, ‘Well, let’s just kind of hive off that one place that does work and try to insulate ourselves from everything else.’

I don’t think that that’s the right way. I think that we can protect Cape Town from national decline by doing more for ourselves and that that is a model for how South Africa can work. The same can happen in Johannesburg and Durban and Bloemfontein and Tshwane and elsewhere – wherever there are governments that actually have the wherewithal and the assertiveness and the gumption to get it done, to push the boundaries. And so that’s my approach to that question. So I perfectly understand the emotional impetus, but I have a different view on how to solve it.

I would also just add, finally, that I regard it as a huge compliment of the DA’s track record in government that people want to make a country out of the one place where the day has consistently governed and governed so well – that it has this track record of success. I don’t think anyone would be calling for Cape Independence if this was an ANC governed province or city. Then we would be calling for DA government. And so I think that goes to show that this is not about political independence, that is not the way to go. This is about making South Africa work by backing strong, assertive local governments like the DA.

On why he chose to become a member of the DA as opposed to establishing his own political party:

You’ve got to back parties with strong brands and track records in South Africa. It’s extremely difficult in South Africa to start new political organisations, because we are a vast country geographically with very low media consumption in general. So that means you’ve got to talk to people. Politics in South Africa is retail politics. It’s door to door, street to street, house to house. And that is hugely time-consuming and resource intensive. So the idea of a brand new political party making massive inroads – it’s extremely difficult.

One party has actually done it before, by the way, and that is COPE (Congress of the People). But they messed it up. They got just over a million voters in six months and they messed it up. And history will judge them very harshly for that. So I absolutely believe in the values of the DA. That’s why I joined the DA in high school. And I’m at heart a liberal.

I believe in individual freedom and maximising people’s opportunities to live a life in which they are able to realise their full potential. And that political program and intellectual framework of liberalism is what the DA believes in and what attracts me to the party and what I want to try and execute in government. And I think that is the only way that South Africa can thrive as a country. So I’d like to try and be at the forefront of implementing that program.