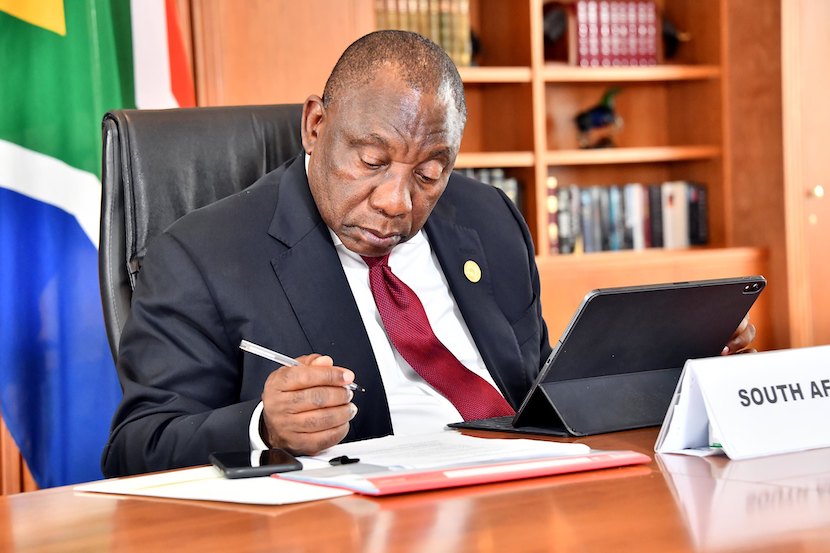 President Cyril Ramaphosa’s drawing room is full of smoke and mirrors, with Yes men and women serving drinks to his eager waiting guests, ever willing to hear his platitudes and admire their own reflections. That’s the context to John Kane-Berman’s analysis of the ANC’s illusory thrust on market-based employment – where the president’s SONA repeated in broad outline the decade-old National Development Plan whose commission he chaired. Yet instead of encouraging market-based employment and cutting red tape, the opposite has happened. We’re told, ‘let business create jobs and make it easier for them – I’ll even appoint somebody to my office to speed things up.” Except the ruling party’s racial quotas, (to name but one piece of legislation), and dogged application of rules grinds on, rendering anyone on the bridge of the Weird Ship SA helpless to issue contrary instructions to those in the engine room. Tea anyone? This article first appeared on the Daily Friend. – Chris Bateman

Much ado about nothing all over again

Statement 1. There is no doubt that market-based employment is the most sustainable form of job creation. South Africa needs a thriving private sector that is investing in productive capacity. Ninety per cent of new jobs will be in small and expanding firms, most in the private sector. Regulatory reform will boost mass entrepreneurship. Entrepreneurs will need to be vibrant and seize opportunities. An expert panel will be appointed to prepare a comprehensive review for small and medium business. There should be a review of labour regulations and standards for small and medium-sized enterprises with a view to reducing the regulatory burden on them.

Statement 2. The government does not create jobs. Business creates jobs. The job of government is to create an environment in which the private sector can invest and unleash the dynamism in the economy. There are too many regulations that are unduly complicated, costly, and difficult to comply with. This prevents companies from growing and creating jobs. We are working to improve the business environment for companies of all sizes though a dedicated capacity in the Presidency to reduce red tape. We are undertaking far-reaching measures to unleash the potential of small, micro, and informal businesses. These are the businesses that create the most jobs. We have started discussions with social partners to review labour market regulations to enable smaller businesses to hire more people.

Wow! A vital role for the private sector and comprehensive deregulation to make that possible, including reducing the regulatory burden on small business. Could these really be the sentiments of the African National Congress (ANC)?

The main difference between Statement 1 and Statement 2 is that they were issued ten years apart. The first is extracted from the National Development Plan (NDP) issued by the National Planning Commission. It was adopted by the government almost ten years ago and widely acclaimed. Cyril Ramaphosa served as chairman of the commission from 2014 to 2018.

The second statement is extracted from President Ramaphosa’s state-of-the-nation address last week. It was greeted with acclaim, though not nearly as much as the NDP. Although business was reported as welcoming the promise to cut red tape, doubts were expressed about the growing size of the Presidency. One commentator, Sam Mkokeli, said that Mr Ramaphosa ‘has resorted to beefing up his office as a way to work around his hopelessly ineffectual cabinet’.

That said, both statements are significant in that they contradict the interventionist mindset of the government controlled by the ANC and its communist allies.

The problem is that failure to implement the promises of the first statement destroys any credibility the second might have enjoyed. We have heard it all before – the vital role of the private sector and the need for comprehensive deregulation, including deregulation of labour law affecting small business.

The South African Institute of Race Relations (IRR) was one of the very few organisations to express scepticism right from the start about the ability of the ANC to implement the liberalising aspects of the NDP. The press, still largely supportive of the ANC, ignored our critique. Now there is much more scepticism about Mr Ramaphosa’s willingness and/or ability to implement liberalising reforms. There is no evidence that he believes in reform anyway.

Although the build-up to the state-of-the-nation address prompts all sorts of organisations to publish their own policy proposals, the address itself now fools fewer and fewer people.

The president’s long speech was also significant for what it left out. Unlike his big speech to his party last month, there was no mention of the need to ‘deepen commitment to the national democratic revolution’. Perhaps the state-of-the-nation is not the occasion on which to frighten the horses.

Another omission was any reference to the Employment Equity Amendment Bill, which was adopted in November last year by the National Assembly and will soon be up for discussion in the National Council of Provinces.

This bill, as my colleague Anthea Jeffery has pointed out in articles on Daily Friend, has two core provisions. The first empowers the minister of employment and labour to set racial quotas for all businesses with 50 or more employees in specified sectors of the economy. Failure to comply with these quotas carries penalties starting at R1.5 million (or 2% of annual turnover) for a first offence.

The second core provision bars businesses from contracting with the government unless they have complied with the minister’s quotas or ‘justified’ their failure on ‘reasonable’ grounds.

The bill – to which Mr Ramaphosa made cursory reference in his reply to the parliamentary debate on his speech – reminds us that the ANC remains strongly committed to its racial agenda. It is obviously incompatible with any idea of cutting red tape. It is also unconstitutional, prompting the IRR to call on the president to veto it.

It further raises a question about appointments such as that of Sipho Nkosi to ‘head up a team in my office to cut red tape across government’, as Mr Ramaphosa put it. Mr Nkosi is a prominent businessman and currently chairman of the Small Business Institute. One commentator thinks he will be some kind of a ‘tsar’.

But will he be a match for Thulas Nxesi, minister of employment and labour and also national deputy chairman of the South African Communist Party? Will Mr Nkosi be a match for all the other interventionist ministers in Mr Ramaphosa’s over-populated government, among them Ebrahim Patel, minister of trade, industry and competition, and Stella Ndabeni-Abrahams, minister of small business development?

Ministers who head departments are the people with the legal authority to introduce legislation granting themselves the power to gazette regulations, enforce quotas, implement tariffs to protect favoured companies, slap taxes on exports, issue localisation orders, decree minimum wages, deny work permits and visas, harass traders, penalise people who challenge their dictates, bully foreigners, obstruct entrepreneurs, impose ‘master plans’, hand out or refuse licences, lay down ‘transformation’ and ‘empowerment’ requirements, chase away ‘non-designated’ people, play fast and loose with competition law,  impose ceilings on the training of nurses, and do all the other things that make the South African business environment so hostile to investment, employment, and growth. And even when they may not have the legal authority, they do these things anyway. That’s without the nepotism, theft, extortion, and other corruption.

Mr Ramaphosa resembles the captain of a ship whose main objective is to keep his job. He can appoint as many Sipho Nkosis as he likes to join him on the bridge. They can issue reports and make recommendations. The problem is that the ship’s engine room is manned by people who are hostile to any liberalisation, and who know that they can with impunity ignore any instructions that may emanate from the bridge.

And many of them probably suspect that Mr Nkosi, like other business envoys before him, is only for show anyway.