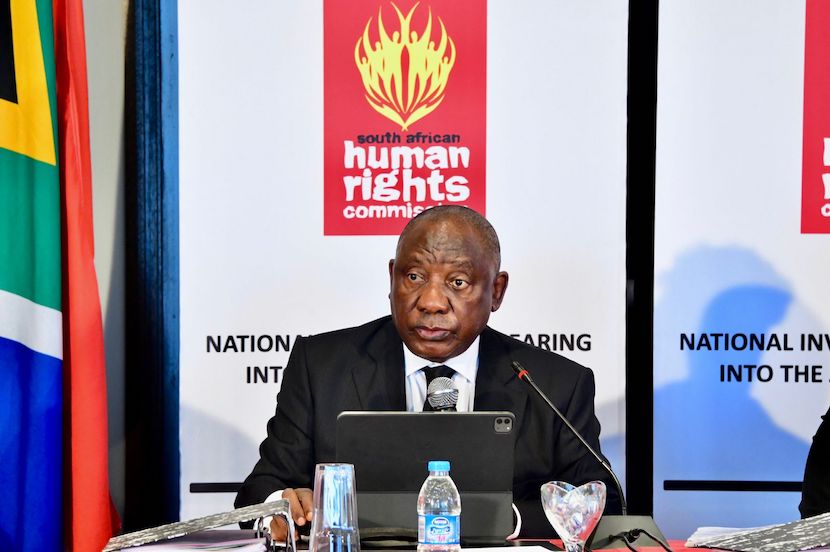 The country’s commander-in-chief was testifying before the South African Human Rights Commission (SAHRC), tasked with investigating one of the most sordid periods in our democratic history. The most-costly riots to date wiped R50bn from our economy and cost the lives of 350-plus people as the violence, destruction and looting – mainly focused in KwaZulu-Natal – crept into parts of Gauteng. Some 70% of those killed died from gunshot wounds. The youngest victim was just 12 years old.

I’ve recently done an explainer video on the findings of a report emanating from the SAHRC’s expert panel investigating the July unrest that you can watch here.

I have also asked 10 questions of the Institute for Security Studies’ head of the Justice and Violence Prevention Programme, Gareth Newham, about the findings of this report.

It is important to hear what our head of state has to say about a period in time in which law and order all but evaporated. State security apparatus, used so successfully by Zuma and his cohorts as a piggy bank and instrument to target political enemies, claims to have provided intelligence reports to the state, warning of what was to come. Police Minister Bheki Cele claims it is balderdash, he never received anything.

Ramaphosa was asked about the purpose, if any, behind the unrest. He remains convinced today, as he was on 16 July 2021, that: “The events of the past week were nothing less than a deliberate, co-ordinated, and well-planned attack on our democracy … intended to cripple the economy, cause social instability and severely weaken – or even dislodge – the democratic state.”

In short, an attempted insurrection. But what did Ramaphosa know of what was to come? Had they been warned?

He was asked upfront whether he had received any intelligence report that spoke of the potential mayhem to come. Ramaphosa’s response: “What we had gleaned from some of the reports was that there were protests, signs of unhappiness – particularly over the incarceration of former president, Jacob Zuma – but none of what happened was foreseen. That never surfaced in any of the reports … it never got to warning of the scale of the devastation that finally ensued. I am yet to see a report that says this is what we knew, and this is how it was going to unfold. It would have had to say, ‘These are the planners, this is what they intend to hit’… now that was not forthcoming.”

So, they knew something was brewing, but intelligence reports didn’t spell it out in the on-the-nose detail the president would have expected.

Long-standing head-butting between our then national police commissioner-general, Khehla Sitole, and police minister, Bheki Cele, was evident for all to see for months. The expert panel found “the minister and the national commissioner are poles apart in their interpretation of how the events of July could have been managed”.

Ramaphosa testified that the lack of co-ordination between these two vital cogs in the law enforcement ecosystem “has been singled out as a problem, which I concede”. Ramaphosa has subsequently – very gracefully, of course – sacked Sitole and replaced him with General Fannie Masemola.

The president was asked whether it would have mattered if the police had been provided with detailed and timeous intelligence reports.

“With the benefit of hindsight. With regard to the intensity, the organised nature and speed with which it happened, given the lack of resources SAPS had, given their lack of organisation, I think they would have been challenged as they themselves concede. They were too centralised to respond quickly and they didn’t have all the equipment they needed. The police did the best they could under very difficult and challenging circumstances. The weakness they suffered from is the weak system they operate under. They were failed by the system which was not firing on all cylinders,” said Ramaphosa.

On the issue of whether, as the SAHRC’s expert panel found, factionalism within the ANC had contributed to the unrest, Ramaphosa reached into his old bag of chestnut phrases still fresh from his time at the Zondo Commission.

“Through a process of renewing the party, making sure the party is properly repositioned and rebuilt to point where we do not ever use state resources to fight internal battles within the governing party. I see positive signs that are emerging. Processes such as the Zondo Commission have helped a great deal to shine a light on the malfeasance. Rather than be more negatively disposed, we are beginning to move to a more positive milieu where we can say factionalism is being eradicated in state security apparatus. State security will now only act in the interests of the people of South Africa,” he said.

Speaking of threats to national security, Ramaphosa says he is keenly aware that the levels of unemployment and inequality in the country are, as many have suggested, a “ticking time bomb”. The prevailing state of the economy, coupled with the millions of unemployed, especially young adults, constitutes a clear and present danger to stability. July last year was terrible. Just like anyone else, Ramaphosa said he watched television and read the newspapers and scanned social media like everyone else. Overwhelmingly he felt a sense of humiliation.

“For the state itself, I have to admit that yes, I found it humiliating, that South Africa, which is characterised as a middle-income country, could be subjected to the type of unrest where poor people were thronging to the stores looking for food. I kept wondering, how do I go to Addis Ababa and hold my head up as the head of state of South Africa when we’ve just been through an event like this. To me, as president of the Republic, I found this humiliating,” he said.

The president is adamant that the lessons learnt from July 2021, which have been paid for in blood and coin, will not go unheeded. As for the masterminds and instigators, South Africans were told law enforcement is hot on the heels of … well, nothing to report there.