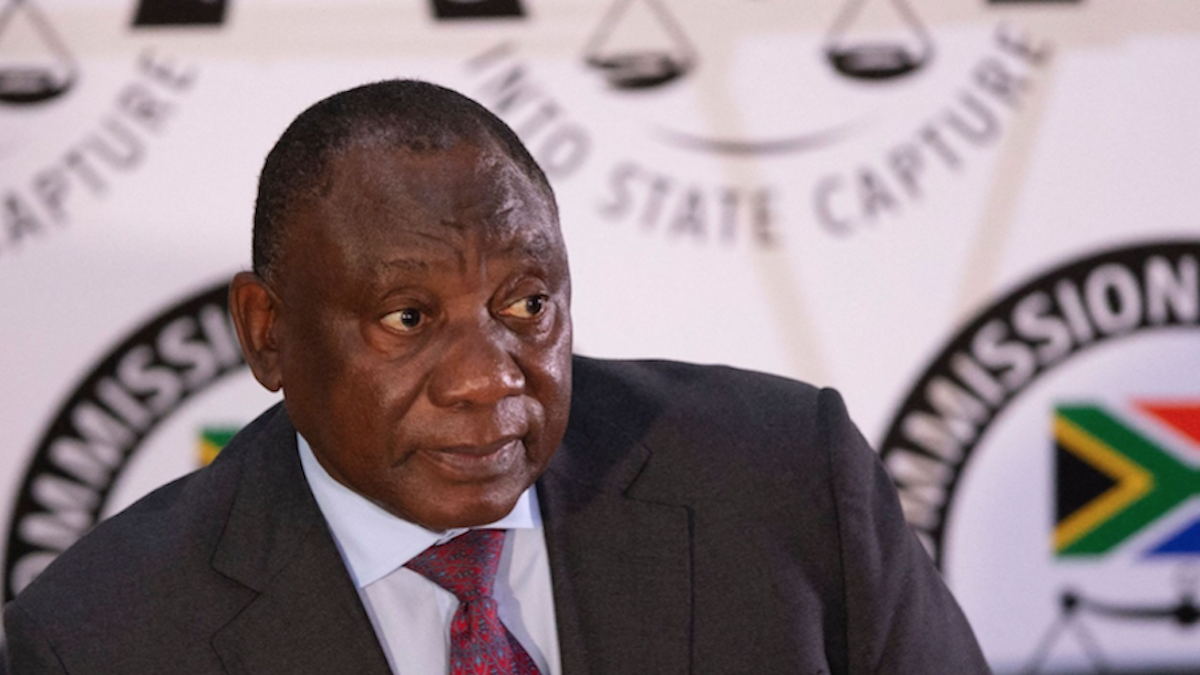 Our president has laid out his implementation plan to “forever bring an end to state capture in our country”. Cyril Ramaphosa calls the caboodle of corruption perpetrated in South Africa over many years a crime against its people. I can imagine the collective eye roll at this point but stay with me.

He addressed the nation on Sunday evening just a day after former head of state Jacob Zuma launched a pre-emptive and rather conveniently timed attack on the embattled Ramaphosa calling him corrupt and guilty of treason. Strong words from Zuma, a convicted criminal who faces a host of corruption charges in a trial, which has been almost two decades in the making. A trial he has thrown everything – including the Nkandla sink at – to make sure it never gets off the ground.

Meanwhile, Ramaphosa himself is the subject of an investigation by law enforcement regarding the theft of a substantial amount of foreign currency stashed at his Phala Phala farm in Limpopo. Simultaneously, a Section 89 Committee in parliament is probing his involvement in the Phala Phala matter.

South Africa’s decline on destructive auto-pilot continues unabated. All the metrics worth anything are going in the wrong direction. Crime is off the charts, Eskom can’t keep the lights on, we’re experiencing water cuts, our ports and rail authority barely functions, and we have a stagnant economy and the worst youth unemployment in the world. We’re likely to be greylisted by the Financial Action Task Force because we don’t adequately punish criminals and money launderers. This makes us a potential haven for terror financing.

The country is a mess. There is such a trust deficit between those who lead this country and her people that speeches are scoffed at, grand plans are written off as a waste of paper, and accountability in South Africa remains merely a word defined in the dictionary.

In the midst of all of this, Ramaphosa has put together “cabinet’s response” to parliament, which he believes will have us step back off the ledge buoyed by a “democracy [that] remained resilient and the people of South Africa [who] stood defiant and resolute”.

Chief Justice Raymond Zondo laid out 353 recommendations to the president in the six reports released in a staggered manner over several months. It contains well over 5,000 pages painstakingly spelling out just how South Africa’s coffers were emptied; how comrades and cadres ran roughshod over any notion of ethical or moral leadership; and how many in the private sector were happy to play their role in looting the state.

This was a co-ordinated effort to “infiltrate key departments, state-owned companies, private companies, law enforcement bodies and security services to loot vast amounts of public funds; that they would weaken and destroy state institutions and thus undermine the capacity of the state”, said Ramaphosa.

Having said all of that, what do he and his cabinet plan to do about it?

There is a 76-page implementation plan report you can read in full here.

But, let me give you the ‘Reader’s Digest’ version of some points that stand out.

We know our SOEs were looted into submission primarily because those right at the top – at board level – were in on the criminality. Transnet, Eskom and Denel, with their Gupta-compliant boards are a good example of this. Ministers like Lynne Brown, Malusi Gigaba, Mosebenzi Zwane, et al, all got very hands-on in the running of these state-owned companies for their puppet masters.

While Ramaphosa is conspicuously silent on the issue of the ANC’s Cadre Deployment Committee – which he himself chaired between 2013 and 2018 – Zondo’s report made it clear that the ability to place politically connected persons on boards and key posts within SOEs and the public administration was “the essential mechanism of state capture”.

This will no longer be allowed. “That is why government accepts the commission’s recommendations on the need for a process for the appointment of boards of state-owned enterprises that is not open to manipulation. This would include the involvement of independent panels with appropriate technical expertise to recommend suitable candidates to the relevant minister,” he said.

Once again, it’s unclear where the ANC’s deployment committee fits in here, considering the party, including Ramaphosa, is defending its work in the courts against an assault from the DA that cadre deployment is unconstitutional and unlawful.

Ramaphosa said the implementation of lifestyle audits for cabinet ministers “will be undertaken by an independent external service provider and will be managed by the office of the director-general in the presidency”. Lifestyle audits have been on the cards for years though so there’s nothing new here. But it’s still interesting Ramaphosa is raising this again.

Let’s hope some timeline in this respect will be forthcoming. Bags of cash stuffed into boots courtesy of the Saxonwold dwellers allow one a lifestyle incongruent with one’s salary. Former Transnet and Eskom CFO Anoj Singh famously had eight safety deposit boxes at Knox Vault. It’s not a huge leap of the imagination what one keeps in said deposit boxes.

Gigaba’s ex-wife Norma Mngoma testified the Guptas gave large sums of cash towards their wedding, not to mention the bags of cash Malusi is alleged to have received quite regularly on his many visits to Saxonwold. Former Transnet and Eskom CEO Brian Molefe is another alleged recipient of bags of money. There are so many more executives and functionaries within the state who lived – and continue to live – beyond their means.

The NPA’s Investigating Directorate (ID) will be made a permanent feature of what the president called the fundamental redesign and review of the country’s anti-corruption architecture. By the end of March 2023, the National Anti-Corruption Advisory Council will have developed its plan, which will include research into the establishment of a permanent Anti-State Capture and Corruption Commission and a Public Procurement Anti-Corruption Agency.

The report highlights: “To date, the ID has enrolled 26 cases, declared 89 investigations and 165 accused persons have appeared in court for alleged state capture-related offences.” This includes the arrest of several high-profile individuals like Siyabonga Gama, Molefe, Singh and Zwane. Not inconsequentially, Zwane is the first former minister – and current chairperson of parliament’s transport portfolio committee – to stand in the dock charged with corruption related to the Gupta-linked Estina dairy project.

In the wake of the announcement, the ID’s national spokesperson Sindisiwe Seboka said in a statement: “The decision to establish the ID as a permanent entity within the NPA, and to strengthen its capabilities with the provision of the requisite criminal investigatory powers, will enable the ID to adopt a fully-fledged multi-disciplinary, prosecution-led investigation model. The ID will be able to apply this model in relation to its mandate on complex corruption.

“This has proven to be the most effective method in the past, and there is no reason why we cannot do it again. A permanent and empowered ID, with full investigative powers and the appropriate budget, will also allow the ID to recruit and retain the quality and breadth of the required specialised expertise, and to build this expertise given the long-term nature of some of the cases. This additional expertise includes forensic investigators, data analysts and cyber experts. The implementation of these measures will require legislative amendments and we hope that this process will be expedited.”

No more ‘donations’ for tenders

There was astonishing testimony during the state capture inquiry, which showed the proclivity of those who donated large sums of money to the ANC to receive government tenders. EOH was one such company that secured a 2014 contract to upgrade the City of Johannesburg’s network and infrastructure after former ANC Treasurer in Gauteng, Geoff Makhubo, sent them a request for donations.

Tens of millions in donations flowed to the ANC from EOH alone. Another character whose donations seemed to directly impact the amount of government business he attracted is Edwin Sodi, the man at the helm of Blackhead Consulting. His business maintained R1bn turnover in government work every year for a decade. Sodi told the commission: “The fact that a lot of the work that I get comes from government … I find it overreaching to create the link between [that and] my donations to the ANC.”

Sodi is a co-accused alongside suspended ANC secretary general Ace Magshule in the Free State asbestos heist case still before the courts.

Ramaphosa confirmed the recommendation to amend the Political Party Funding Act to criminalise donations to political parties “in the expectation of access to contracts” will be made.

In recent years, the taps appear to have already run dry for the party in this respect; the ANC is unable to pay staff, service providers or settle tax bills with SARS. Ramaphosa has personally had to open his wallet to pay bills at Luthuli House. The ANC is a political party that charges a measly R20 annual membership fee. It’s always been a mystery how it manages to pay high-ranking members the salaries it does.

Considering the fight against state capture wasn’t possible without the bravery and sacrifices made by the country’s whistle-blowers, this aspect of Ramaphosa’s planned reform is vital.

The report notes: “The Department of Justice has commenced a review of the Protected Disclosures Act and Witness Protection Act to, among other things, give effect to the following commission recommendations:

–  Ensure whistle-blowers receive the protections afforded by section 32(2) of the UN Convention Against Corruption.

–  The possible award of a proportion of funds recovered to the whistle-blower provided that the information disclosed has been material in recovering funds.

–  Whistle-blowers be afforded immunity from criminal or civil action arising from honest disclosures.

The review, which will include consultation with stakeholders and the National Anti-Corruption Advisory Council, will be completed by the end of April 2023.

One whistle-blower, Athol Williams – who exposed global consultancy firm Bain & Co’s destruction of SARS – has been particularly vocal about the lip service paid to the protection and support offered to those who do the right thing. “We don’t need legal reform to show compassion for the people he [Ramaphosa] claims to applaud,” said Williams, who is currently living outside of the country owing to concerns for his safety.

The Zondo Commission made certain adverse findings regarding several high-ranking ANC members who find themselves serving at the behest and discretion of Ramaphosa. He hired them and can fire them. There are members of his cabinet who Zondo recommended be referred for criminal prosecution on corruption and fraud charges.

A lack of decisive action against those within his cabinet – who hold sway in the ANC’s National Executive Committee – this close to the December elective conference shouldn’t come as too much of a surprise. But it’s widely viewed as yet another missed opportunity by Ramaphosa to show leadership and backbone. Instead, this statement is what South Africans will have to stomach for now at least.

“The president will undertake a review of the positions of those members of his executive implicated in wrongdoing in the report and determine, on a case-by-case basis, in line with his discretion in this regard and his obligation to observe the principle of legality and to act rationally, whether or not any action ought to be taken,” reads the report.