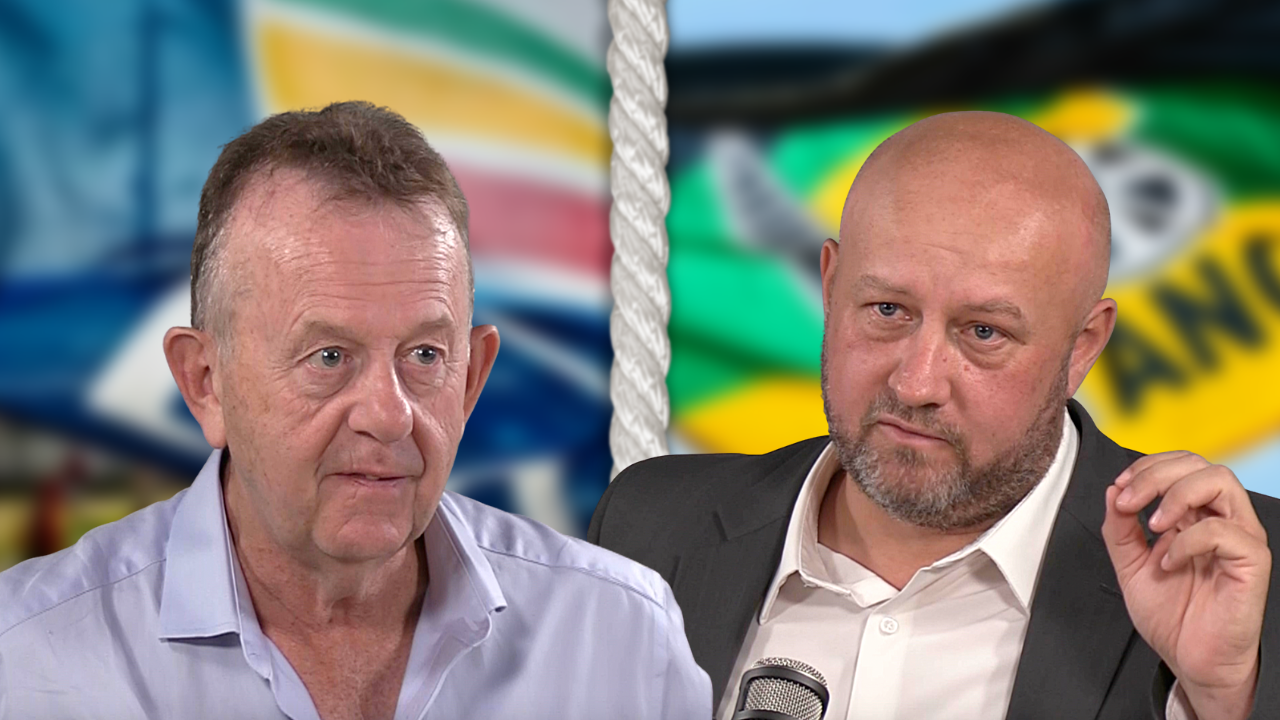 In a return to the BizNews studio after spending much of the past four months on the road, Dr Frans Cronje of the Social Research Foundation provides an update on optimism he exuded last time. Bottom line: Cronje is still upbeat and hasn’t changed his view that the 2024 Election will be a positive watershed for the nation. In this interview he shares perspectives shaped by both on-the-ground research with voters and some uncharacteristic reform-minded actions by South Africa’s ruling political party. Cronje’s long-range forecast: A possible Parliamentary coalition between the ANC and its closest rival, the DA – rather than the more popularly predicted ANC/EFF combine. Fascinating and topical with SA’s Watershed election little over 500 days away. He spoke to Alec Hogg of BizNews.

Dr Frans Cronje on the falling power of the ANC

Frans: [00:01:41] The ANC has lost its majority in urban centres. If only urban people voted, the ANC’s at 30%, its rural vote is still very strong. But that’s logical because it’s an older population with living memory experience of growing up as a black person under apartheid, in a rural community. And today, in the relative sense of things, is a much better experience than that. But even that rural vote of the ANC is going to tail away at the country’s mortality rate now. So it’s done.

Frans: [00:03:07] I think there are people who have that incentive and the ability to try and do it, but I don’t think they will succeed because the forces against them are so strong. The economic and social pressures explain why ANC support is sitting in an election now at 45%. It peaked at almost 70% in 2004, a decade and it is falling really fast. There is a thing called the direction of travel indicator for South Africa, and that measures the net result between people who feel the country is coming right and those who feel that it’s going wrong. So you take the positives and the negatives. You subtract them from each other and you get a score. After Ramaphosa became leader of the ANC, the score sat at about -40. It’s just the benchmark. Just got it earlier this year at -72. It’s collapsing and it is a lead indicator of public opinion. Mr Ramaphosa himself has a score, a popularity score. You can do that in various ways. But immediately in let’s say, the 24 months after becoming ANC leader, he sat at about 60. But it’s just a relative thing. He has now fallen below 50 for the first time. So the spell has been broken. The Ramaphosa spell. ‘Ramaphoria’ is not holding anymore. No, it’s broken now. He was, at the time of the 2019 election, 10 points stronger than his party was. Because his popularity was in the high sixties, the party got 57 in that national vote. And this is extremely important. There has been some sort of wargaming, if you can call it that, in testing opinion. So you sort of put it to people: if Mr Ramaphosa wasn’t around anymore, you just think through this, would you? How would you then vote in an election? And the RET guys, if they went off on their own, and did their own thing, would do very, very badly in such an election. Below 20%, most likely. So you boot Ramaphosa and the RETs take over. You don’t have a solution, Mr Ramaphosa, because there has been no substantive reform. This bill is broken and the direction of travel indicator is sinking. However you look at this. The current administration has boxed itself in now to a point where it is going to lose. And it”s going to lose because ordinary people have brought that result about. They have given up long before business and diplomats have given up on the offering that the ANC made to the country politically. Now, that is an incredibly important moment for us.

Frans: [00:06:09] What is it? The first thing it does is this is an idea of James Myburgh, who runs the PoliticsWeb website that we escape the risk of national suicide. National suicide is what happens when you have one dominant actor who can decide what happens to the society under pressure. So you get Venezuela, you get Zimbabwe and all of that. We’re going to escape that risk to a significant extent as these forces continue to pull the ANC deeper and deeper down and you must not understate how far it could go. The good ANC guys around who sort of say – quiet corners, you know: how far can this thing fall if these trends continue? And if you present a compelling alternative, it can fall extremely fast and extremely far. So, you escaped the national suicide risk. And people always kind of take the baseline of the present as the worst thing that could ever have happened. They don’t realise how much worse things could have happened. So, escape that. Second thing is we are going to have to make a deal. That might happen about 500 days from now in the next election. If for some reason the opposition does terribly badly and ANC does terribly well, and if you really try and make everything just go right for the ANC and the lights are on and you roll out a bit more welfare, maybe, and the opposition’s completely useless. Maybe they can kind of cling to 50% one more time, but 2029. There is no chance. We are going to have to make a deal and that is the opportunity to seize now: what deal do we make? The options are varied and many of the smaller parties can coalesce around something like the DA. The DA and the ANC can come together in some sort of conflaguration.

On how quickly the country could turn around

Frans: [00:14:38] Just been to one of the investment banks and I made a great point to their clients: given what is priced into South Africa at the moment, if the chaps said that even if half of what I suggest might happen, happens, I mean, it’s going to take off. Right? Let’s think of some deals that work. Well, the DA has recovered politically. It is standing pretty strong at the moment. Its policy offerings are broadly pragmatic. A deal with the ANC works. The budget or mini budget of what, 10 days ago? Two weeks ago? In real terms, the minister cuts civil service and grants spending even while extending this COVID-19 grant a little bit. It’s an extraordinary thing to do. They are going to lose an election. The right thing to do is to go super populous, double down on the civil service, borrow heavily, with a huge welfare rollout. Maybe they will cling to the 50% with the fingernails one more time. They haven’t done it. Now this is not something that should surprise anybody. The ANC has a deep conservative fiscal streak that it inherited from Mandela after he was released from prison and he said to them, “The Nats have screwed up so badly in running the economy that if we do not grow and reform, we will borrow in dollars and it will be the end because that’s how the end happens. So, 13 years later, after coming to power, the ANC had recorded a budget surplus. Don’t forget that the technocrats who brought that about are still around. They are still in the broader universe. Some of them will likely make a serious run at seizing greater influence over the ANC at this forthcoming leadership congress.