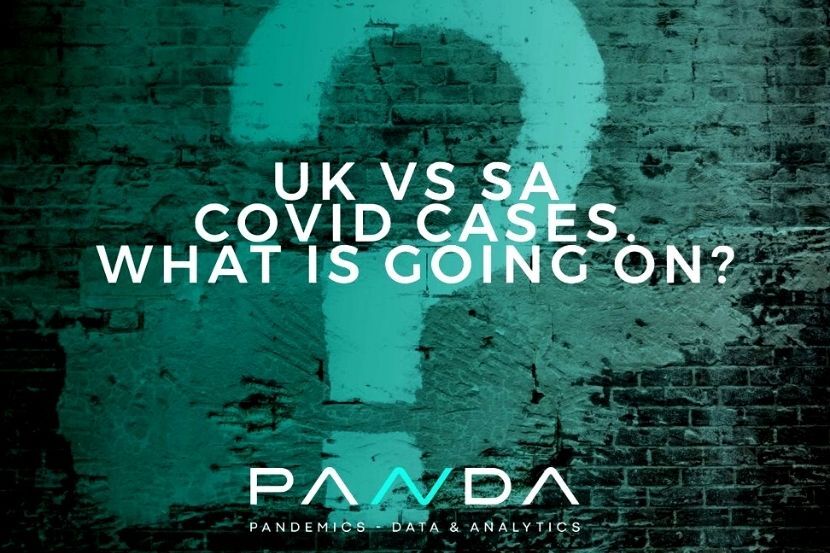 On Monday, the UK reported 40,077 new Covid-19 cases. On the same day, South Africa reported only 106 new Covid-19 cases. To put this in perspective, the new cases recorded in SA on Monday equates to less than 0.3% of the number of cases reported in the UK. Currently, 79.5% of the UK population aged 12+ has been fully vaccinated. In stark contrast, just 38.29% of the SA population aged 18+ has been fully vaccinated. These are the statistics sourced directly from the respective official Covid-19 government websites of the UK and SA. In this article by PANDA (Pandemics ~ Data & Analytics), the dissonance between these two countries – particularly in light of the aforementioned statistics – is explored. – Nadya Swart

The UK is seeing 50,000 new Covid-19 cases per day, a near-record high. This in spite of almost the whole adult population being vaccinated (and, unnecessarily, many children).

Meanwhile, South Africa, with a similar population, is seeing just 500 new cases per day, despite its ‘poor’ vaccine uptake.

Hospitalisations in the UK are not matching the sky-high case rate, which we are told is what you would expect if the vaccines are doing something to protect the vulnerable against severe disease.

What then might explain why the UK has 100 times the case rate of SA, despite nearly 100 million injections?

The BBC’s ‘Reality Check Team’ explains ‘the science’ to us:

Might it be that the Brits have slacked off on masking, the BBC asks. “Study after study has shown face masks can help stop the virus from being passed between people.” Unfortunately, they neglect to mention study after study which shows that in real life, using real-life data, there is no correlation between mask mandates and lower cases.

Besides, countries such as Denmark abolished all restrictions, including masks, some time ago and have seen no significant rise in cases. So that makes no sense.

Next the BBC suggests that restrictions might have been lifted too soon, and that people were ‘mixing’ more – that is, going about their normal lives. Trouble is, they’ve been doing that in Scandinavia for months and it made no difference.

Next up as an explanation is waning immunity from vaccines, yet hospitalisations remain low. And finally, the ‘stalled vaccine roll-out’. The proposed solution: booster shots and vaxxing more kids of course.

It should be plain to everyone, including the ‘Reality Check Team’ themselves, that this is nonsense.

Is the most obvious answer not maybe the most simple? Covid-19 vaccines appear to be hopeless at preventing transmission. We know from the large Israeli study (covered in an earlier post) that the vaccinated carry the same – sometimes higher – viral load as the unvaccinated. Other studies confirm no link between percentage of population vaccinated and case rate by country.

Broadcast media, mainstream media and politicians, refuse to acknowledge this.

South Africa, way down the list of percentage vaccinated, now has one of the lowest Covid-19 rates in the world. The UK has one of the highest. The virus is endemic and its seasonal ups and downs will continue forever, like all other coronaviruses. Vaccines may protect the vulnerable but they won’t stop the spread. Neither will masks.

The sooner we accept this reality the better it will be for everyone.

If you want the vaccine, get it for yourself. Not for others.