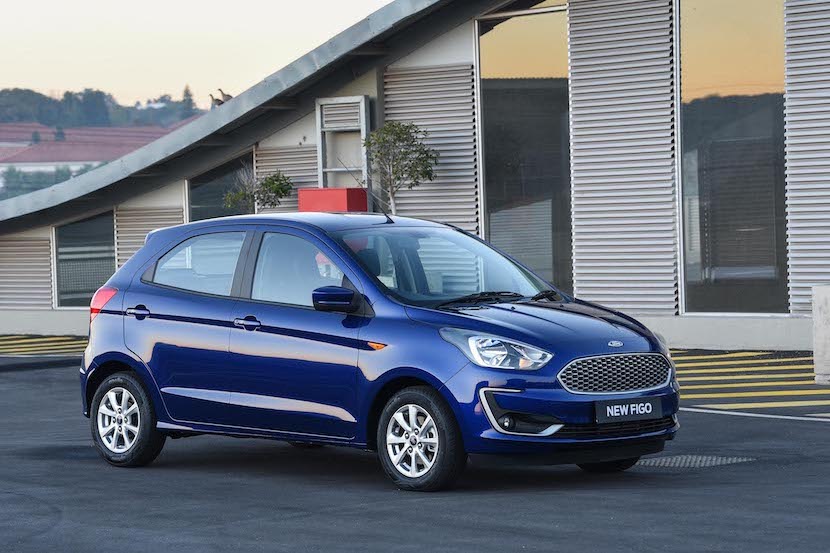 Ford has a knack for building practical, well-priced hatchbacks that are also remarkably fun to drive. The original Focus springs to mind. Courtesy of fully-independent multi-link suspension, the Ford had the measure of its rivals when it came to handling and dynamism. This can be said of almost all of the Blue Oval’s hatches – take the current Fiesta, for instance. Even when equipped with the thrifty turbodiesel motor, the B-segment Ford attacks corners with great precision – without sacrificing ride comfort.

While the Fiesta was once the budget offering in Ford’s range, the latest model – with a starting price of R330 800 – is out of reach for many South Africans. Filling a very important role in the line-up is the Figo, the brand’s cheapest offering. Competing against the hugely popular Volkswagen Polo and Toyota Starlet, the Figo faces stiff competition.

Aesthetically, the Ambiente makes do without the alloy wheels of the Trend and Titanium, and receives a black radiator grille instead of the silver-painted version which adorns the higher-spec models. Ambiente models also lack colour coded side mirrors and door handles, among other things.

Unlock the door with the key (no remote key fob here) and you’ll find a sensible, well-thought out interior. Typical of the segment, the interior plastics are hard – but do, at least, feel solid. While it has the measure of the Starlet (in terms of fit and finish) the Polo Vivo is still the segment leader in terms of interior quality. Indeed, the Vivo features a padded, soft-touch dashboard which really gives an upmarket feeling to the cabin. It may occupy the lowest rung on the ladder, but the Ambiente trim still nets you a number of essential features. You have to do without a rev counter and remote central locking but you do, at least, receive the essentials – manual air-conditioning, front electric windows, Bluetooth connectivity and a USB port all make the cut.

In the Figo, cloth-trimmed seats provide excellent support and are very comfortable. Unfortunately, the driver’s pew doesn’t offer height adjustment. As a consolation, the steering wheel is adjustable for both rake and reach. Space in the rear is acceptable, with the Starlet offering more room for passengers. The Figo also loses out when it comes to carrying capacity. With the rear bench in place, it offers up a usable 256 litres of luggage space. Still, it’s pipped by the Vivo’s 280 litres and the Starlet’s simply cavernous 345 lire boot. In terms of safety equipment, the Figo has the basics – ABS and dual front airbags – but is missing out on ISOFIX child seat anchorages and stability control (standard on the Starlet, optional on the Vivo).

The Figo is powered by a three-cylinder, 1.5-litre petrol engine with a healthy 91 kW and 150 Nm of torque. Sending its power to the front wheels via a five-speed manual ‘box (a six-speed auto is available with the Trend trim level), the little Ford is capable of hitting 100 km/h in a surprisingly brisk 11.8 seconds. Not especially fast, but the Figo feels punchy with plenty of grunt on tap.

Compared to its rivals, the Figo feels sprightlier. This is courtesy of the notable power advantage it has over its rivals. The similarly priced Polo Vivo 1.4 Trendline offers 55 kW and 130 Nm while the cheaper Starlet 1.4 Xi (R217 500) produces 68 kW and 130 Nm. This hasn’t hampered the Figo’s fuel economy, though. Ford claims an average fuel consumption figure of just 5.7 L/100 km. This matches the Polo Vivo, but fails to match the superb 5.1 L/100 km Toyota claims for the Starlet Xi. During my time behind the wheel of the Figo, I managed to average 6.2 L/100 km.

The five-speed manual is perhaps the weakest point of the Ford in terms of driveability. It’s certainly not bad, but it feels notchy when compared to the slick-shifting ‘box you’ll find in the Vivo. The clutch is also heavier than expected, especially for a car that will spend most of its time in the city.

On the highway, it settles down very nicely. The Figo remains composed and refined at high speeds, with very little aural intrusion from the three-pot. The ride is very good, a few inches shy of the Starlet’s polished ride. However, the Ford makes up for it with its wonderful driveability. Through the corners, it handles with poise and panache. Crisp steering makes it an engaging steer – it’s by far the most entertaining car in its segment.

At R224,600, there’s no denying that the Figo offers exceptional value for money. There are one or two features that, perhaps, should be standard at this price point (the remote key fob and ISOFIX anchorages spring to mind), but overall it’s a well-equipped and sensible budget hatchback. It may not be as practical as its main rivals, but it’s far more entertaining to drive, offers superior power and does so without any negative effects on fuel economy. What’s more, it has the best service plan (four-year/60 000 km) and the longest warranty period. It’s difficult to choose between the three, though – all of them provide very strong cases if you’re in the market for a budget hatchback. But if you’re looking for a bit of dynamic prowess, the Figo should be on your shortlist.