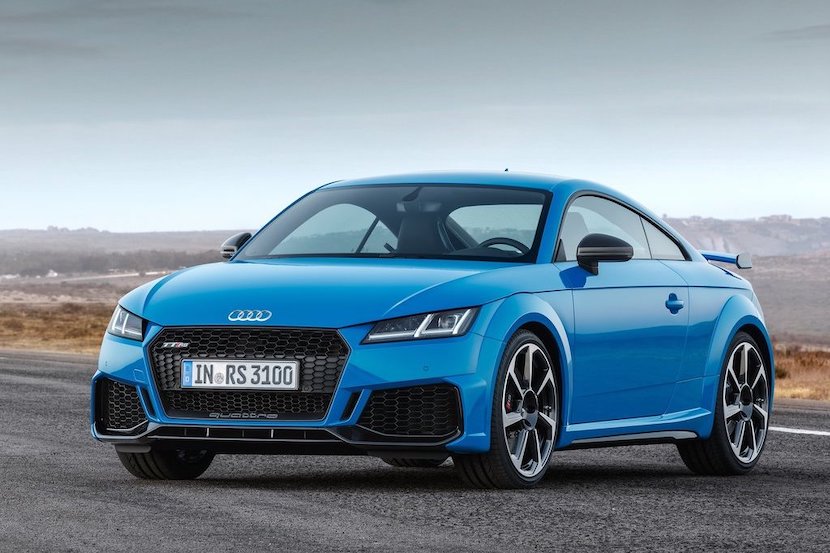 Unveiled at the 1995 Frankfurt Motor Show, the TT concept was seen as a design masterpiece. Drawing on the Auto Union racers of the 30s, the sleek coupé had a very clean, symmetrical look that was said to be inspired by Bauhaus design philosophy. The futuristic look was well-received, but many thought – as is the case with many concept cars – that the TT would never make it into production.

Just three years later, the concept became a reality and Audi’s TT was born. Universally praised, the styling was a big hit. As a result, over 270 000 affluent buyers signed on the dotted line. Now in its third generation, the TT no longer has the niche small coupé market all to itself. Toyota, Porsche and BMW all offer equally capable alternatives to the TT.  Is the original style icon from Ingolstadt still worth a look in a segment bustling with talent?

Well, from an aesthetic viewpoint, it seems so. Coated in Kyalami Green (a R2 790 option), the TT RS grabs the attention of everyone. The compact body shell is stretched over 20-inch, seven-spoke “rotor” alloy wheels. Peek through the diamond-turned spokes and you’ll see the massive brake discs with their red calipers. Paired with the RS body kit and rear wing, the range-topping TT has a fine balance of aggression and sophistication.

The snug interior is well laid-out, with the infotainment system relegated to the instrument binnacle. Metallised switchgear lends an upmarket ambience to an already first-rate cabin littered with tasteful detailing. There is a distinct feeling of strong build quality within the cabin, with everything you touch feeling remarkably substantial. Despite it first seeing the light in 2015, the cockpit still feels fresh and modern, even when compared with newer Audi models.

Carbon Twill decorative inserts (R14 250) lift the dark cabin, pairing well with the black leather and aluminium detailing. The all-digital instrumentation is clear and offers up a crisp display. Together with a scroller, the MMI system can also be controlled via intuitive buttons on the steering wheel.

From behind the wheel, there is enough adjustment to allow for people of all shapes to find their preferred driving position. Trimmed in Nappa Leather with honeycomb stitching, the pews are comfortable and supportive – important when cornering at high speed. Electrically operated, they also offer lumbar support and adjustable side bolsters. Optional heating (at R6 090) is a worthwhile option. Specification is impressive, with LED headlamps, automatic climate control, reverse camera and ISOFIX child seat anchors all shipping standard.

The facelifted TT RS retains the 2.5-litre turbopetrol. Its peak outputs are 294 kW and 480 Nm of torque. And what a gorgeous noise it makes. The five-pot delivers a melodic soundtrack that only gets better as the revs build. From inside the cosy cabin, the hollow, rasping sound of the powertrain is relatively raw, allowing occupants to fully enjoy the gorgeous exhaust note.

Courtesy of the quattro all-wheel drive system, the TT RS sends its power to all four corners via a seven-speed S tronic transmission. The supercar-rivalling TT is capable of hitting 100 km/h, from standstill, in a mere 3.7 seconds. As impressive as the rapid acceleration is the remarkable stopping power. Audi’s have always had immense stopping power and this is no different. They have plenty of feel and, during hard driving, don’t fade.

In comfort mode, the dual-clutch transmission clicks through its cogs quickly and smoothly. Pop the RS into dynamic mode and the gear changes become even more rapid and violent. The speed at which the TT blurs through its gears is remarkable. The steering is quick and direct, offering high levels of feedback to the driver.  The top speed is limited to 250 km/h, although an optional package – at R25 200 – raises the limit to 280 km/h.

As a super car rivalling sports coupé, the TT RS has few rivals. It has an awe-inspiring powertrain and offers an exceptional mix of performance, luxury and usability. The exterior (especially when painted in a vivid hue) is a visual treat, met with myriad smiles and thumbs up from passers-by. The cabin cannot be faulted – the quality is phenomenal and feels hewn from the solid. The doors shut with a reassuring thud and the buttons, when pushed, have a satisfying click.

The few rivals the TT RS does have – the BMW M2 Competition and Toyota GR Supra – are both excellent vehicles, too. Choosing between these three is a tough (but lovely) choice to make, but it’s worth noting that the TT RS – at R 1083 000 before options – is the cheapest and fastest to 100 km/h. 23 years on, the TT is still a striking sports car. The styling is universally loved and, what’s more, the RS can rival many super cars for sheer acceleration. It’s an absolute masterpiece that has been blessed with a dual personality. Not only can it thrill you on a mountain pass, but it excels as a daily driver too.

Dynamic capabilities aside, the TT RS impresses with its dual personality. Drive it quickly and it thrills, the sonorous five-cylinder firing away. Pop it in comfort mode, and it’s a perfectly capable commuter. Cabin is a masterpiece – very high quality 👌🏽@audisouthafrica pic.twitter.com/JLBrFe4Rst