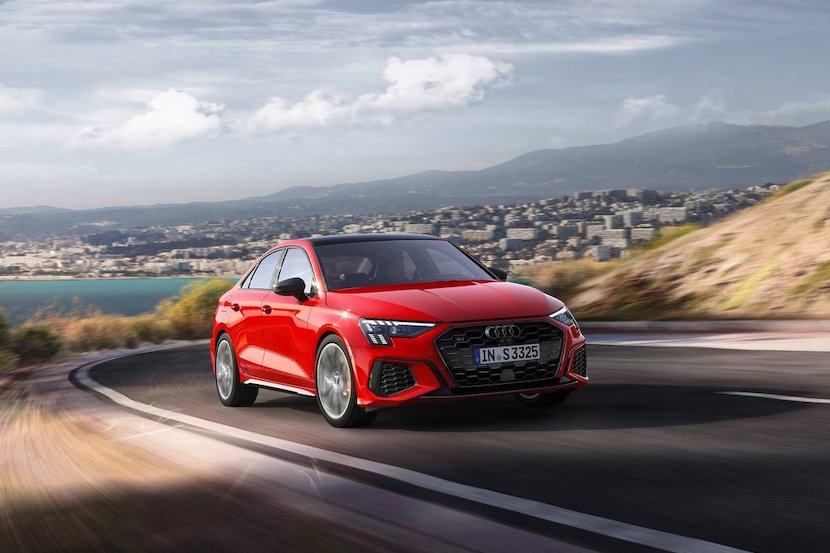 Building a competent sports sedan is no mean feat. It has to be all things to all people – quick, stylish, spacious and dynamic. That’s a tall order, but the Germans have always been masters at nailing the recipe. Taking a more subtle approach is Ingolstadt’s premium car maker, Audi.

Although the RS3 is on the way, the S3 is currently the range-topper. It’s always had a strong following; the S3 badge first appearing in 1999. However, it’s only since the last generation that Audi has offered a booted alternative to its hot hatch. Like the previous model, the current S3 makes use of a turbocharged 2.0-litre, four-cylinder engine. The result is a healthy 213 kW and 400 Nm of torque. This is, in certain circumstances, sent to all four wheels via a quattro all-wheel drive system.

Mated to a seven-speed ‘S tronic’ dual-clutch gearbox, the S3 sedan is able to sprint to 100 km/h in just 4.9 seconds – impressive for a small sedan equipped with a four-cylinder engine. It’s torquey, giving the smallest Audi sedan an effortless persona when cruising in traffic. It’s nicely refined, too. Leave it in comfort drive mode and it hums away to itself just like a regular Audi would.

Give the brushed aluminium throttle a healthy push and – especially in Dynamic drive mode – it sets off with electrifying pace. The four-pot motor may not have the howling exhaust note of the brand’s incredible five-cylinder engine, but still has a characterful exhaust note. A deep, satisfying boom emanates from the quad pipes at the rear – but it’s what happens when you let off the throttle that’s perhaps most enjoyable. Pops, crackles and bangs fall out of the exhausts, much to the delight of the driver and those nearby.

But what about the dynamics? Well, it’s enormously impressive. Equipped with optional (R14 000) 19-inch alloy wheels, you’d think the ride would suffer slightly. Not so – it’s firm, but never harsh or uncomfortable. The all-wheel drive system inspires confidence, allowing you to exploit the S3’s performance without fear of losing grip or creating unwanted wheel spin. Over the Cape’s beautiful Clarence Drive, the sports sedan felt balanced and entertaining – without feeling terrifying.

The transmission also deserves praise. While responsive during rapid driving, dual-clutch gearboxes always feel a touch dim-witted when driving around town. The S tronic cog-swopper found in the S3 felt like a regular automatic when tootling about town, the seven-speeder shifting quickly and with ease.

The interior is a great place to be. Optional (R21 500) fine Nappa leather seats give the cabin a luxurious feel and offer plenty of support for both driver and passenger. At R19 300, the optional electrically-adjustable front seats makes it easy to dial in your preferred driving position. The flat-bottomed, three-spoke sports steering wheel is delightful to hold and adds a great sporting feel to the cabin.

In terms of practicality, rear passenger space can’t be described as commodious. As someone measuring 1.7 m tall, I could just sit behind my driving position. While headroom is fine – good, in fact – the sports seats do rob passengers of knee- and legroom. To be fair, this is a criticism that can be levelled at the S3’s rivals, the A35 AMG sedan and M235i XDrive Gran Coupe. If you aim to carry adult passengers in the rear on a regular basis, perhaps a larger sedan like the S4 is more appropriate. Claimed boot space is less than that of it’s rivals, the Audi offering up 325 L of packing space compared to the AMG’s 370 L and BMW’s impressive 430 L.

It may trail behind its rivals in terms if practicality, but the S3 is on par – if not ahead – of the competition in most aspects. The Mercedes and BMW both boast more power (225 kW), but neither feel as alert or nimble as the Audi. The BMW has the better ride quality out of all three, but fails to match the S3 for dynamism. The A35 – with its overly firm ride – is quick through the corners, but feels numb and disconnected.

Overall, the Audi feels like it’s the best compromise. Fast, comfortable and refined, Audi’s smallest sports sedan is a desirable car that seemingly ticks all the boxes. What’s more, at R810 000, it undercuts its rivals by a considerable margin – the Mercedes-AMG A35 sedan retails for just under R950,000 while BMW’s M235i Gran Coupe will set you back R896 000. All three offer a comprehensive five-year/100 000 km maintenance plan.

If it’s my money, I’d have to go for the S3. Looks are subjective, but I think the understated Audi looks classier and more tasteful than its German counterparts. What’s more, the interior feels solidly built and it offers an entertaining driving experience. The S3 continues Audi’s tradition of delivering fast, understated and sophisticated sedans that manage to meld performance and usability with great ease.