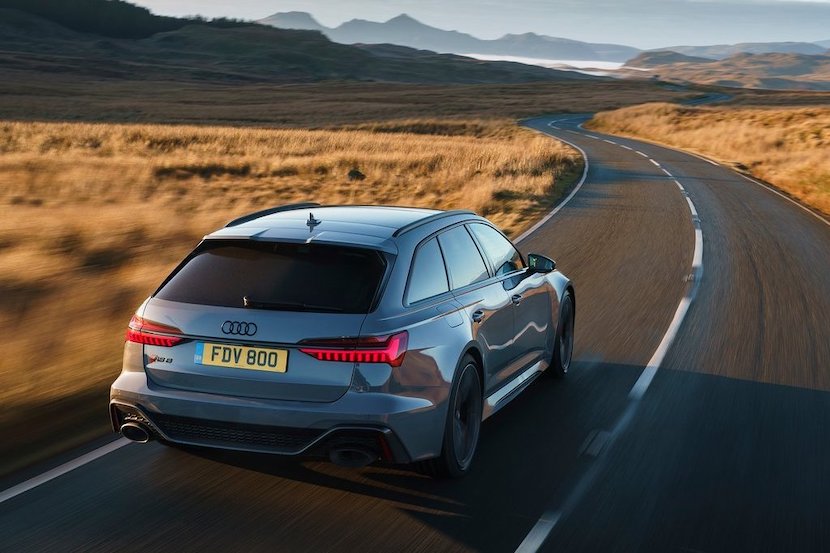 Penned by Robert Louis Stevenson, the Strange Case of Dr Jekyll and Mr Hyde tells the tale of a meek, well-respected scientist in 1800s London. Curious to bring out his second nature, Jekyll transforms himself into the sinister Mr Hyde – an evil, unrepentant man with a penchant for crime.

In the automotive world, the estate car could be seen as Dr Jekyll – a sensible choice of family car for those who value safety, practicality and utility. At a quick glance, the Audi RS6 seems to be just that – yet as with Dr Jekyll, a truly monstrous beast lurks under the seemingly innocent exterior.

But take a closer look and you’ll see signs of Mr Hyde. The muscular wide body stretches over the colossal 5-V-spoke “trapezoidal” 22-inch alloys in the same way an athlete’s skin stretches over their muscles. Aside from the large exhaust pipes and RS6 badging on the rear, the big Audi remains a relatively subtle car. There’s a subdued aggression to the Avant which is very appealing.

Painted in optional Sebring Black Crystal Effect (R37 000), our RS6 test unit looked even more sinister. It’s a menacing machine, the Matrix LED headlamps and daytime running lamps giving the front end just the right amount of brightwork. The RS6 commands attention, with myriad thumbs up and smiles from other drivers and passers-by.

Step inside and you’ll find yourself in a similarly stylish environment. Pleasant to look at, the materials used within the cabin are fabulous. As a top-shelf Audi, the interior has been blessed with the most beautiful build quality. The facia, door cards and centre console are trimmed in a mixture of supple leather, Alcantara and metal finishes.

As you would expect, standard specification is generous – four-zone climate control, MMI Navigation Plus (with MMI touch response) and a Bang & Olufsen 3D sound system are among the RS6’s standard features. Optional extras include a head-up display (R25 130) and power-latching doors (R12 080), among other things.

The large front seats are comfortable, offering plenty of side bolstering and the perfect amount of under-thigh support. Thanks to electrical adjustment (with memory settings), there are plenty of seat adjustment options for the driver. The front passenger is pampered with plenty of options to adjust their seating too . The commodious boot offers up a sizeable 565 litres of luggage space and there’s an SUV-rivalling 1,680 litres of utility room with the 60/40 split rear bench folded forward.

The RS6 Avant is a different breed of estate car. Or rather, it sometimes is. You want practicality? The Audi obliges, with the luggage space, comfort and versatility that wagons are known for. But put the Avant into Dynamic mode, and the RS6’s desire for twisty roads is stronger than any station wagon sold in SA.

Paired to an eight-speed automatic gearbox, the four-litre twin-turbo V8 engine produces impressively high figures. Peak power is rated at 441 kW, with a brawny 800 Nm of torque on tap. Sent to all four wheels via the quattro all-wheel drive system, the two-tonne wagon is capable of sprinting to 100 km/h in a mere 3.6 seconds.

But the RS6 isn’t just talented in a straight line. Ingolstadt’s halo Avant does a marvellous job of hiding its two-tonne mass when driven dynamically down a winding road.

On the open road, the RS6 is an entertaining vehicle to pilot. Nicely weighted, the steering is direct and quickly geared, making the big Audi a joy on twisty roads. What’s more, the big brute is easy to navigate through narrow city streets. The V8 powertrain pulls strongly from any speed and remains refined as the pace increases. In Comfort or Efficiency mode, the eight-speed ‘box shifts with near-imperceptible precision. High-speed stability is excellent, too. The RS6 feels composed and sure-footed, making it a fine motorway cruiser. The engine remains hushed, too – until you prod the throttle.

Like the ill-fated Dr Jekyll, the RS6 Avant possesses dual personalities which differ from each other immensely. On the one hand, it’s a supremely refined and comfortable luxury cruiser with plenty of space for the family and their luggage. But awaken the V8 and it turns into a fire-breathing beast. An almighty growl emanates from the rear pipes as the 441 kW powertrain jettisons the wagon down the road with gusto.

Unlike Stevenson’s creation, however, the RS6 Avant is all the better for its dual personalities. It’s an exemplary all-rounder, with no true rivals on the South African market. Yes, the AMG E63 S and BMW M5 Competition can give the Audi a run for its money (in terms of performance and luxury), but neither are offered as station wagons locally. If you want rapid family transport but want to stand out from the SUV crowd, there’s really no other choice. The RS6 Avant is a truly dazzling motorcar.

Couldn’t think of a finer weekend companion – with a 441 kW V8 under that muscular bonnet, Audi’s iconic fast wagon is capable of some mind-bending performance. Drive it gingerly, however, and the RS6 fulfils it’s luxury wagon role with competence.@audisouthafrica @TashtaJ pic.twitter.com/FuIskc2HyT