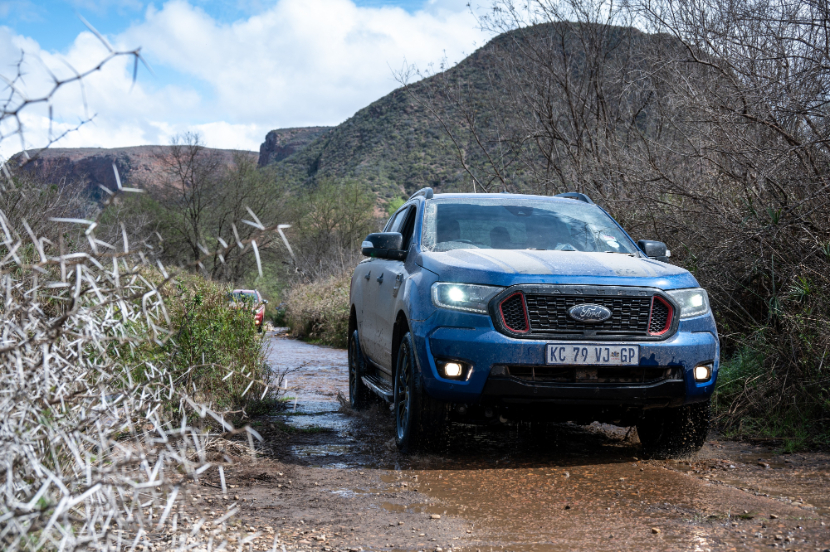 Ford’s Ranger is coming up to a big overhaul in 2022, so in the current model’s swansong year, the Blue Oval is rolling out a number of special editions to round off what has been a stellar 10 years for the company.

The latest such edition is called the Stormtrak. Offered in four colour options, Sea Grey, Frozen White and Blue Lightning are common favourites from the rest of the line-up but Lucid Red is unique. The black mesh grille with red inserts carries over from the Ranger Thunder but is enhanced by black decals for the bonnet and doors, black roof rails, and 18-inch alloy wheels finished in gloss black.

Three-dimensional Stormtrak logos on the lower sections of the front doors, as well as on the rear tailgate round off the exterior changes and make for a striking enhancement over the Wildtrak on which the Stormtrak is based.

A noteworthy addition to the list of standard equipment is a Power Roller Shutter for the rear load compartment, which allows electronic opening or closing of the protective shutter over the loadbox and provides a convenient method to securely stow cargo out of sight.

Compared to the manual roller shutter, which can be locked only in specific predetermined positions, the Power Roller Shutter can be securely locked in any position and has also been designed with an anti-pinch feature to prevent injury or damage when contact is made with an object.

Operation of the roller shutter is managed via bespoke buttons on the key fob, instrument panel and inside the load box, complemented by the tailgate locking mechanism being integrated into the vehicle’s central locking system.

Adding further versatility is the adjustable bed divider kit that makes it easy for the owner to compartmentalise the cargo area according to the size of the items being carried – thus preventing goods from rolling around when driving.

Step inside the Stormtrak’s cabin over special illuminated front scuff plates and you’re met with subtle changes like red stitching and the Stormtrak logo etched into the seat backrests and on the panel above the glovebox. Standard is an extensive list of active and passive safety systems and driver aids, such as Adaptive Cruise Control with Forward Collision Alert, Autonomous Emergency Braking, Lane Keeping Alert and Lane Keeping Aid.

Powering the Stormtrak is the same, well-established 2.0-litre bi-turbodiesel motor mated to a 10-speed automatic gearbox as you’ll find in the Wildtrak. The Ranger’s towing capacity of 3,500kg remains unchanged, along with the 800mm water wading depth and 230mm ground clearance.

Over three days I experienced the Stormtrak in varying conditions but mainly along approximately 800 km of the Eastern Cape’s gravel district roads between Storms River Mouth and its source. It is quite remarkable how well the Ranger handles extended periods in such conditions, providing sure-footedness that’s not easily matched by competitors. The suspension revisions Ford introduced three years ago, specifically having moved the anti-roll bar placement allowing better damping settings, are a key contributor. The 2.0 bi-turbo powertrain feels strong but is also refined and the 10-speed automatic gearbox gets on with the job without any real sense of it continually hunting for the right gear – despite how many there are to choose from.

The Stormtrak, priced at R790,300 for the 4×2 and R846,500 for the 4×4, offers everything one could ask from an upmarket double cab. An extensive list of standard features put it on par with premium saloon cars, while the limited edition visual enhancements offer exclusivity.