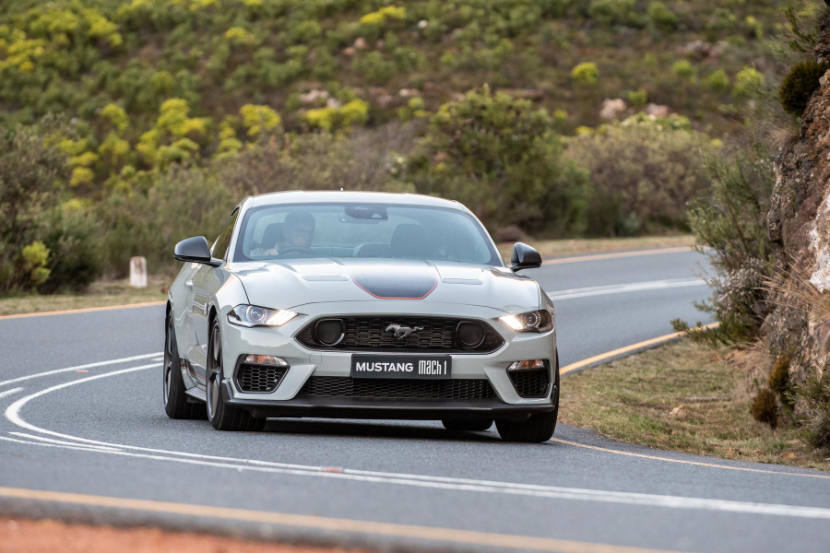 The year was 1969. By this stage Ford knew they had something special, as Mustang sales continued to soar from the initial launch in 1964. A power war was raging across Detroit and the Mustang was Ford’s weapon of choice, as they shoehorned even greater V8 blocks under the bonnet of the iconic pony car.

The culmination of Ford’s efforts was a set of thumping great V8’s. A 5.8-litre unit started the lineup, with optional upgrades to 6.4 or 7.0-litres available, too. Suspension upgrades matched the powertrains but Ford executives felt that the existing GT nameplate didn’t reflect the strengthened performance, so the Mach 1 was born.

That nameplate stuck, denoting a sexier, faster and better handling version of the Mustang. It’s been 17 years since Ford released a Mach 1 and I was fortunate enough to drive one of 90 examples that have come to South Africa – all of which have promptly been sold to eager customers. Pricing for the Mach 1 starts from R1 182 100 for the six-speed manual to R1 203 800 for the 10-speed automatic.

Look closely, and you’ll see the latest Mach 1 is a carefully curated amalgamation of the current Mustang line-up parts bin – a greatest hits, if you like. Built around a Performance Pack 1 version of the Mustang GT, the Mach 1 has stiffer front and rear suspension sway bars, a limited-slip differential, six-piston Brembo brakes and a beefier radiator.

That’s not all, though. The Mach 1 also makes use of the Shelby GT350’s rear subframe, providing more precise handling. MagneRide active dampers, fluid coolers and a GT500 rear diffuser round things off nicely. Aesthetically, all 90 Mach 1’s are finished in Fighter Jet Grey paintwork with black and orange decals. The orange detailing is carried through to the brake calipers and into the cabin, too.

The Mach 1’s Coyote V8 boasts the same upgrades as the Bullitt (wider throttle body and intake manifold) giving a total output of 338 kW and 529 Nm. Two gearboxes are available – a 10-speed automatic or the six-speed Tremec TR-3160 from the GT350, offering rev matching and no-lift shifting – that means you can change gear with the throttle fully open. Ford claims a 0-100 km/h sprint time of 4,4 seconds for the automatic Mach 1 and 4,8 seconds in the manual. Selectable drive modes, including Sport and Track, change the throttle response and steering effort, with Track Apps enabling drivers to deploy accelerometer, acceleration timers and Launch Control features – viewed in the standard 12-inch all-digital instrument cluster.

What the above all boils down to is quite a remarkable Mustang. With plush sport seats and tyres with a sensible sidewall profile, the Mach 1 is oh-so-comfortable but when the roads get twisty, those MagneRide dampers firm up nicely to control the tyres’ contact patch. Stiffer sway bars mean body roll is kept in check, but the key is that the Mach 1 remains supple – which translates into a communicative and progressive seat-of-the-pants feeling for the driver.

The press unit I spent a few days with was equipped with the 10-speed auto ‘box. In a sports car, I’d always prefer three pedals and a manual gear change. Just 15 of the 90 Mach 1 units allocated to South Africa are manual. It’s an absolute peach of a ‘box and allows the driver to unlock the glorious, howling V8 that sings all the way past 7 000 r/min.

When left to its own devices, the auto ‘box is bearable but if you decide to use the paddle shifters to override the gear change, you are often left with a clunky downshift that is terribly unsatisfying and unsettling when driving in an enthusiastic manner.

Mustangs are often mocked by those who prefer European and Japanese sports cars. Traditionally, there was merit to these claims, as unsophisticated suspension left much to be desired of Ford’s pony car. However, the latest generation Mustang (culminating in the Mach 1) is, in my view, one of the ultimate on sale today, as it adheres to the fundamentals of what makes a sports car. There’s a naturally aspirated power unit, a manual gearbox and not too many electronic tricks that hide lazy engineering. Its compliance over undulating roads yields great rewards to the driver in the way the car communicates its level of adhesion and how close you are to overcoming the grip on offer. This cannot be said of many of today’s sports cars – and this all makes the Mach 1 great.