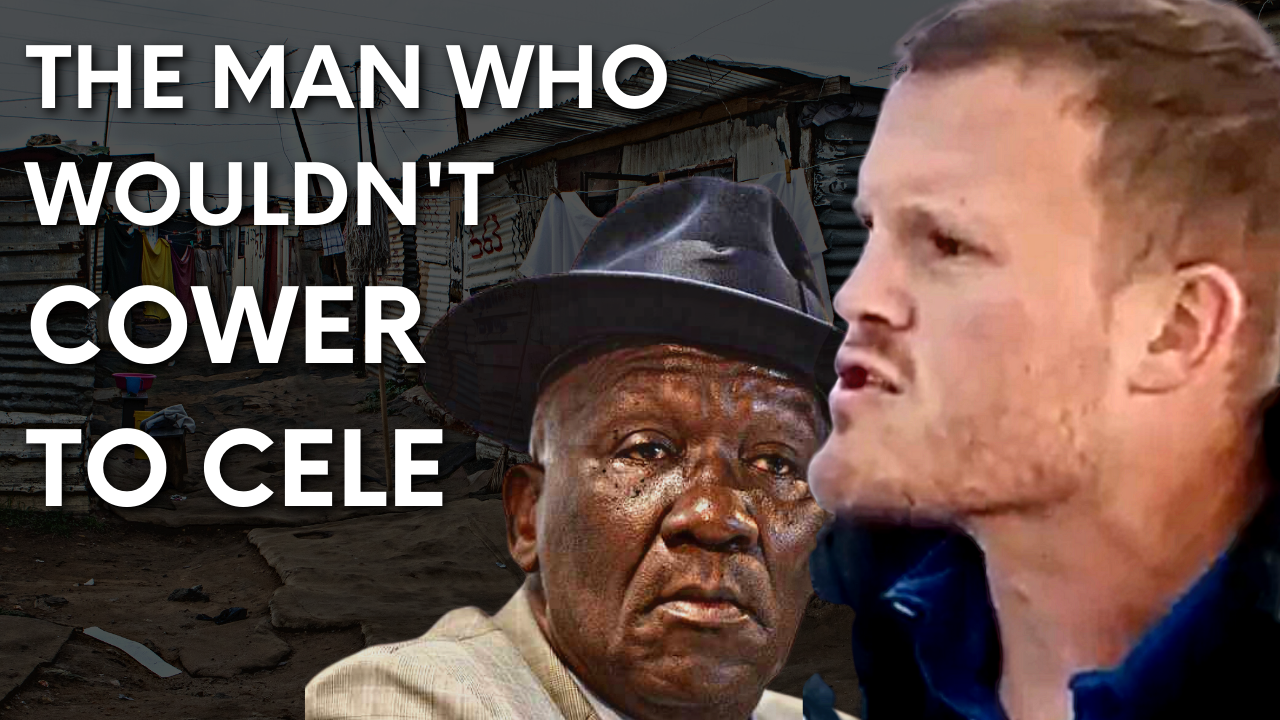 Community policing activist Ian Cameron – who heads up NGO Action Society – made headlines when cops ejected him from a community meeting in Gugulethu after a war of words with Police Minister Bheki Cele. Cameron told BizNews he was the 13th speaker at the event where he proceeded to tell the minister about the reality of crime and gender-based violence in the area. Cameron said: “I’m tired of the excuses and I’m tired of you making this a political thing. I want to graciously invite you to come and patrol without a bodyguard, without a grand car, in normal clothes with this community tonight to get the sewage on your shoes that they patrol through.” The minister warned Cameron not to provoke him. “You regard me as a garden boy,” Cele said. When Cameron stood to defend himself from the racial assertion Cele yelled at him to “shut up” several times and sit down. “It’s your turn to listen young man or get out,” shouted Cele. Cameron will be laying a complaint with the Independent Police Investigative Directorate regarding the police’s conduct as well as criminal charges against officers who attempted to assault him. – Michael Appel

Ian Cameron on how the whole ordeal with Bheki Cele unfolded

I was astounded when Minister Cele showed up with a six vehicle motorcade with bodyguards. I’m sorry, but it just feels very unfair and arrogant, especially in a community like that where people really don’t have any form of real protection. He started speaking and he made a few political comments about the provincial government, local government, etc. What I know is that I’ve spent time with both SAPS members and local law enforcement members that fall under provincial government and for example, the City of Cape Town. And in all three different institutions, they are great people and they all put their lives on the line every day to protect people. And they don’t have good leadership or resources. He said that SAPS is the only constitutionally mandated body, and then there should be no parallel structures. And I just thought to myself, so here you are failing your own constitutional mandate, and now you are making this a political discussion about whether devolution should happen or not instead of focusing on the problem at hand. What has he done to implement what has been suggested in the Khayelitsha Commission Report years ago?

I waited my turn. There were ten speakers in the first round after he had spoken, and then I was the third one in the second round, so I was the 13th speaker. I started off by just saying who we are, what we do, and then I said to him, Minister, I honestly think you are, separated from the reality that the majority of us face. And I challenge you to come and patrol in that community, to walk through the same sewerage that the brave ladies walk through every night when they patrol with no protection. And I challenge you to come there without your bodyguards, in your motorcade. And obviously, I was worked up about it because of the way that he entered there but nevertheless, I stated a few facts about the fact that detectives are ill equipped and constable detectives being expected to sort out serious domestic violence cases.

He then just stared at me and obviously kept quiet. And then a few people after me spoke. Suddenly he pointed at me and he started saying that, you know, I think of him as a garden boy. And he gave all his credentials about being a freedom fighter. I’m not going to get involved in a race debate with him. And secondly, there’s a time and a place for everything. I respect his credentials 100%, but the point is 67 people are murdered on average every day in South Africa and more than anywhere around 120-150 women are raped every day, and those are just the ones that are reported. He’s not solving that and that’s my fight. So when he accused me of racism or insinuated that, then I stood up and I said, I will not stand for that, you will not say something like that.

On why he’s an ardent critic of Bheki Cele

I think he’s unfit to be the minister. He failed as national commissioner as well. He was appointed just because of being politically connected, not because of experience. I find it laughable that some people still call him general. But he is not a career cop. He has got no qualification whatsoever. So why is he the minister of police? I really believe the way that he’s been appointed was to protect certain political elites. How can we expect ground level policing to be successful if we can’t even manage that? So short and sweet. No, he’s an incompetent minister.

Thousands of people are killed annually in South Africa. I think our murder rate for probably the next 12 months will be the highest that it has ever been. It should go over even 24,000, if not more people per year. And our murder rate is quite accurately reported. The last survey I saw it is about 96% reported and it’s alarming to imagine that a murder isn’t reported in some cases, but nevertheless, we’ve got a very serious crime pandemic.

We have a minister that would like to keep on quoting historical credentials while people are being killed at this rate. And that’s why I refused to make it a race or culture discussion. I go to these places daily. I see what happens to people. And I think we need to call it out.

On the DNA backlog issue

Over the past year, there’s been a lot of alarming data showing us that there’s a tremendous backlog in terms of DNA processing in the police by the forensic science laboratories. In May, I saw the backlog was around 56,000 cases last year and more or less the same time period was at 300,000. We have a shortage of not only capacity, but also capability in terms of competence in the police. There are still many good people left, but I think they are under severe pressure. And the DNA backlog basically means that rapists and murderers do what they do for even longer because there’s no way of linking them to a crime.

On meeting with his legal team on a way forward

We’re definitely going to file a complaint with IPID about the police’s behaviour yesterday. I think Bheki Cele did more damage to his own reputation than what he did to mine yesterday. To me it’s about the other victims. We will also be considering steps in terms of the Ethics Committee for parliamentarians and ministers and the code of ethics. We are considering criminal charges against some of the police members that attempted to assault me.

Lirandzu Themba, spokesperson for the police ministry, wrote on social media that: “He [Cameron] was removed after repeatedly interrupting a meeting despite being given a fair chance to raise his concerns prior, without any interruptions. Mr Cameron was escorted out of the meeting after failing to stop his disruptive behaviour.”