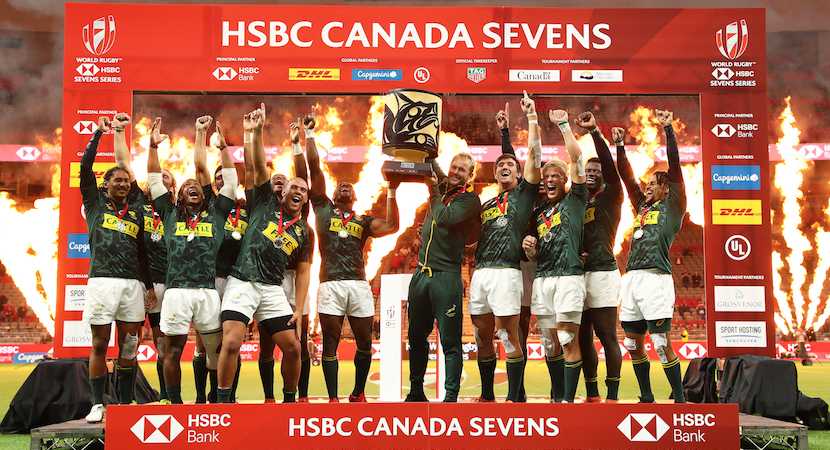 JOHANNESBURG — As the 2018/19 World Sevens Series competition passes the season’s halfway mark, the Blitzboks have finally won their first tournament, taking the crown in Vancouver. The South Africans were particularly impressive, having to knock out two powerful teams en route to the final – Argentina and third placed Fiji. This was a big tournament for a player like Selvyn Davids, who has, ever since last year’s tournament in Hong Kong, shown that he belongs on the big stage. In Vancouver, he arrived. His audacious footballing skills, sniping runs, and unerring eye for the gap earned him a place in the “dream team”, the squad selected at the end of each competition comprising the best players of the weekend. For five tournaments the South Africans have battled to bond with one another and find their momentum. Last weekend in Las Vegas, they recorded one of their worst results in finishing 7th and falling to fifth place on the overall standings. This win moves the Blitzboks back into 4th place ahead of England. It might be a bit late in the season, with just 4 tournaments (Hong Kong, Singapore, London and Paris) left to play, to expect an unlikely defence of their World Sevens title, but the Blitzboks’ chances of finishing in the top 4 and guaranteeing an automatic qualification to next year’s Olympic Games are greatly increased. – David O’Sullivan

The Springbok Sevens team claimed their first HSBC Canada Sevens title in Vancouver on Sunday when they beat France by 21-12 in the final of the sixth tournament in the HSBC World Rugby Sevens Series.

The Blitzboks also moved back into fourth spot on the standings after their impressive showing in BC Place, where they secured wins over the USA and Fiji, currently first and third on log.

It was the first tournament win for the Blitzboks since June last year, when they clinched the HSBC Paris Sevens and subsequently the World Series.

South Africa lost previous finals in Vancouver in 2016 and 2017, but this time around, made sure they leave for home with the gold.

Springbok Sevens coach, Neil Powell, was very happy with the outcome of the weekend.

“One could feel the team was getting together and bonding,” said Powell.

“It was never about the potential of the players, rather the ability to play for and with each other. All week I could feel the difference.

“I felt that the squad needed some time to combine and mould as a team and it happened this weekend. The players trusted our system and each other. It is amazing how 13 players, all from different cultures and backgrounds, can combine under one flag and for one jersey.”

Powell was equally pleased with the performances on the field.

“It was a tournament where we really showed good defensive discipline, but our attack was equally impressive, especially against Argentina and Fiji in the playoffs earlier today.”

In the final, the French scored first when Pierre Lakafia crashed over for a 5-0 lead. Impi Visser scored for South Africa and with Selvyn Davids converting, they edged ahead 7-5.

🤭 There’s an obscene amount of skill in this @Blitzboks try. How good is Selvyn Davids? #Canada7s pic.twitter.com/myLTpVtovF

That lead was extended in the 10th minute with a long run by Davids, who scored in the corner. He converted from that tough angle to extend the lead to 14-5.

Werner Kok also added his name to the scoresheet with a strong run down the line to add more pressure on the French.

The French came back with a converted try of their own with three minutes left, but South Africa’s defence held out for a historic win.

Earlier in the day, South Africa outplayed Fiji 31-12 in the Cup semifinals and defeated Argentina 33-12 in their Cup quarterfinals. In both those matches, South Africa delivered very strong second half performances.

South Africa started the tournament fifth on the log, a point behind England in fourth. This win pushed them nine points clear of England again and back into fourth and Olympic qualification criteria.

Selvyn Davids was named Player of the Final. He also scored the most points in BC Place (59), including five tries. JC Pretorius (5) shared the try scoring gong with Davids, with Muller du Plessis and Siviwe Soyizwapi scoring four each for their country.

Davids and Pretorius were also named in the tournament Dream Team.

The team will arrive back in Cape Town on Wednesday. The next tournament in the World Series takes place in Hong Kong from 5-7 April.