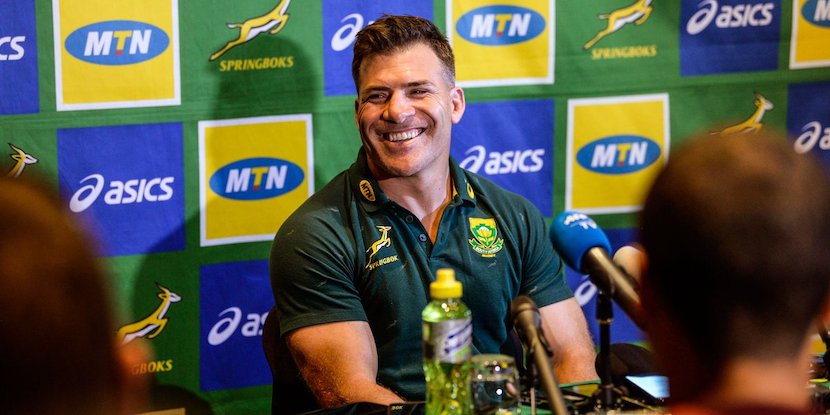 Much is being made of the fact that Schalk Brits is the second-oldest Springbok captain at the age of 38 and 3 months. In fact, he’ll go down in history as the oldest Bok to skipper the national team for the very first time. For the stats-obsessed fan, Victor Matfield, who had captained the Boks before, was three months older when he took charge of the team in his very last Test match as the Springboks beat Argentina in the 3rd place playoff at the 2015 Rugby World Cup at London’s Olympic Stadium. Brits had famously retired from the game in 2018 after an illustrious career with Saracens, becoming one of the most successful South African exports to the English Premiership. But a sudden surprise call-up to the team for the 2nd Test against England at Newlands in June last year saw him do an about-turn on his career. He played Super Rugby for the Bulls, but just one more Test after that, and has bounced in and out of the Bok squad ever since. Now his biggest fantasy becomes a reality as he puts on the captain’s armband in his 13th Test for only his second run-on start. Coach Rassie Erasmus clearly wants his World Cup captain Siya Kolisi to have nothing on his mind other than “emptying the tank” as he returns from injury in the number 6 jersey. It’s not clear what long-term plans Rassie Erasmus has for Brits. The hooker is certainly in the twilight of his career, and with Scarra Ntubeni expected to come off the bench to replace Brits at some stage of the match and with Malcolm Marx and Bongi Mbonambi lurking in the wings, the Bok coach has plenty of hookers for his World Cup squad. He won’t be taking 4 of them to Japan. – David O’Sullivan

Schalk Brits described the Springbok captaincy as his wildest dream that has come true. Brits will be leading out South Africa against Argentina at Loftus Versfeld in Pretoria on Saturday, in what is the Boks’ last home game before the Rugby World Cup.

The Farewell Test against the Pumas starts at 17h05 and will be televised live on SuperSport 1.

“To lead my country is one dream that has come true for me and it’s going to be amazing to lead out this group of players representing our country and the Springboks,” a beaming Brits told the media at the team hotel in Pretoria on Friday.

“For me, being part of the Springboks is such a huge honour. I’ve been involved with the Springboks since 2008 and only played 12 Test matches, but every time I get selected, or even performing a supporting role, it’s an unbelievable honour.

“Siya (Kolisi) is still our captain and I am going to rely heavily on him and the other leaders in our team. From my perspective, we just want a complete team performance, and if we can get that right then I think we will be happy as a team.”

Brits was a stalwart for the Cape Town-based DHL Stormers and then joined English club Saracens where he has attained almost cult-like status. He returned to South Africa after his contract in England ended and came out of retirement to join the Vodacom Bulls for the 2019 Vodacom Super Rugby campaign, after which he was called up to the Springboks.

“Being back in the country and then part of the squad is unbelievable and I am really grateful, every day, for having a second chance,” said Brits.

Thank you to every single message of support to @Springboks Captain number 63, @SchalkBrits, and showing that #WeGotUBokke. @MTNza has brought you closer to the players and the players closer to you. Keep the support coming! 🇿🇦🇿🇦🇿🇦 pic.twitter.com/O3OHO5Oy6o

The popular hooker was quick to dispel any notion that Saturday’s match will be about cementing places in Springboks’ Rugby World Cup squad, which will be announced on Monday, 26 August.

“From a performance point of view, we just want to put up a performance that our other team mates will be proud of. We have a specific plan and a process and if we follow that then hopefully we will be successful,” said Brits.

He added that Argentina will be very difficult opponent at Loftus: “At Saracens I played alongside some Argentina team mates and I can tell you they are a tough bunch, very proud and very hard to play against.

“They have made some changes and we know they will come very hard at us, so we will have to be prepared for that,” according to Brits.

Scarra Ntubeni is set to make his Springbok debut off the bench tomorrow, and Brits had a few word of encouragement for the DHL Western Province hooker, whom he described as “a great rugby player and even a better person”.

“I’ve seen Scarra from a young age and although I’m very grey, he is getting more grey than me! It’s amazing to see a guy like that who have been in the trenches, had a lot of injuries and coming through the system,” said Brits.

“I’m backing him and he’s backing me up tomorrow. To learn everything in one week is tough but he is a clever player so I can’t wait to see him the Green and Gold and I hope he puts in a performance (when he gets onto the field) that is unbelievable.”