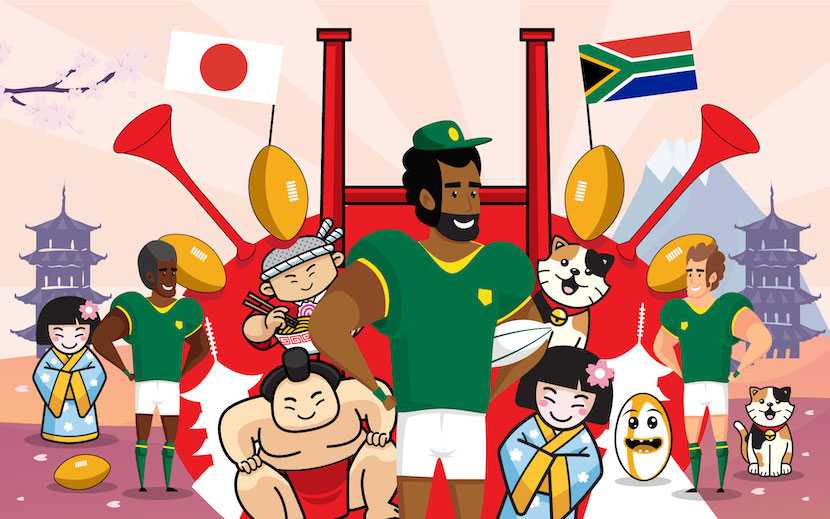 When the Boks go into battle against the All Blacks in their opening match of the 2019 Rugby World Cup, all eyes will be on a rugged warrior who runs fast and plays hard in the early autumn of his career.

There are just a few weeks to go until the sting of a southern hemisphere winter becomes the teasing warmth of spring. The change of seasons happens just in time for the Springboks to feel the African sun on their skins they head north for the relative coolness of the autumn of Japan and the country’s seventh Rugby World Cup.

In Yokohama, where they will play New Zealand in their opening match on September 21, the Boks may be a little early to be able to see the changing of the leaves. Watching the autumn leaves has been a traditional pastime in Japan for centuries, rivalled only by the blooming of the cherry blossoms in spring.

The red, orange, yellow and brown leaves, called “koyo” in Japanese, is a sight that has inspired artists and poets down the ages. For Buddhists, the changing and falling of the leaves reminds all that life is ephemeral. For tourists, it is a beautiful and quiet way to tap into the flow of Japan.

The Springboks will need to take those moments of calm and beauty in the maelstrom of the World Cup. Things change during World Cups. Coaches are squeezed by pressure and are prone to changing their tactics. Players feel the expectation of fans, friends and family. The build-up, the months before the World Cup, seems to take forever, but then it comes in a rush.

Which is probably why Springbok coach Rassie Erasmus changed things up a little ahead of the Rugby Championship and why he has taken a look at the 2007 Rugby World Cup for lessons in how to prepare for 2019. Consistency of selection is vital, as is experience. Which may be why he has called up a player who 13 years after he made his debut for the Springboks should be in the autumn of his career.

Read also: Goodbye James Small, the troubled rugby genius who gave me hope when I needed it most

Frans Steyn is 32-years-old. It feels like he played in a different era. He was just 19 when he made his debut in 2006 and 20 when he played in the 2007 World Cup. When Jean de Villiers ruptured his bicep against Samoa in the opening match, Steyn stepped up replace him seamlessly at inside centre and was a stand-out during the tournament in a position he had only played in once before as a professional.

The Springbok coaching staff sang the praises of Steyn in the Springboks’ first get together ahead of the Rugby Championship. They say he runs like he is 21-years-old and has become something of another “coach” in the team, his 13 years of experience coming through at training.

Steyn has lived his rugby life differently. He left Bloemfontein to join the Sharks when he was 19. At the age of 22, he left South Africa to play in France for Racing Metro 92, a move that stunned the country’s establishment. He came home for a spell with the Sharks, has had his run-ins with the South African Rugby Union and did not play for the Springboks, but he has kept on playing, kept on learning, kept on winning.

Steyn was forced out of the 2011 World Cup after suffering a shoulder injury against, strangely enough, Samoa. Coach Peter de Villiers lamented his loss, saying it was worse for South African than the All Blacks losing Dan Carter. He may not have been exaggerating as the Springboks were knocked out in their next match, the quarterfinal against Australia.

Steyn is approaching the early autumn of his career. The hair is as long and unkempt as ever. The beard is a little fuller. He has learnt to live life a little slower and richer. He could, like the “koyo”, be an inspiration for the Springboks in Japan this year.