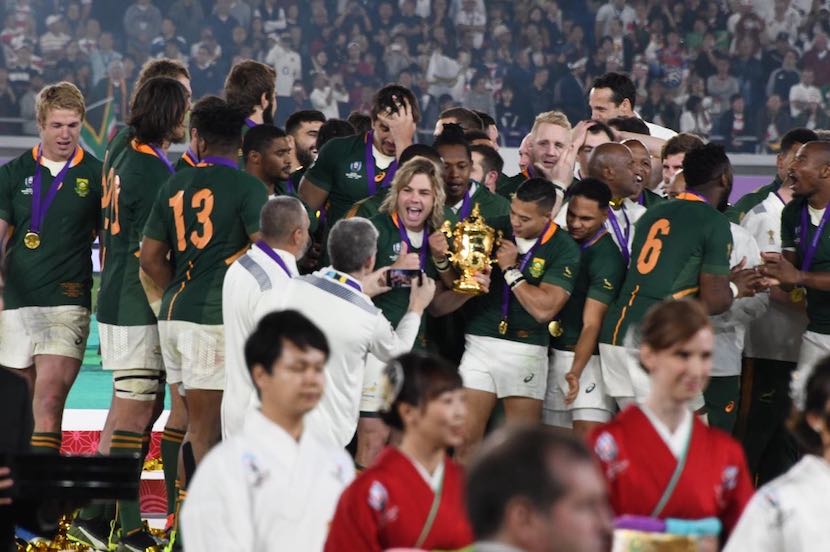 It’s a brutal Rugby World Cup final at the International Stadium, with forwards on both sides carrying injuries, but now it’s about all about execution – well beyond accurate passing and catching. English fly-half, George Ford, makes an unforced error with a simple territorial kick that would have put England in a commanding attack position, either via a ruck, or a line-out, 10 metres from the Springbok try line. It goes straight into touch, bringing the sides back to scrum with a Springbok put-in and enough game time passed to let the English know how formidable the Boks are when they get a shove on. Then at Minute 29, the English suddenly show us just why they’re favourites, sustaining a 25-phase period of possession, finally spreading the ball wide – whereupon it’s knocked on. A subsequent Springbok scrum infringement gives England a deserved three-points. The Boks are just happy they didn’t concede a try. As half time approaches, we get a foretaste of what later goes down as the second-best try. Lukhanyo Am, on the run, sees no way through, so chips ahead. English Full back Elliot Daly makes a fatal error – he looks up as he’s about to field the ball – and knocks on; Scrum, in which SA wins a penalty. Pollard slots the ball through the posts. The air-punching, throat-aching tries have yet to come… – Chris Bateman 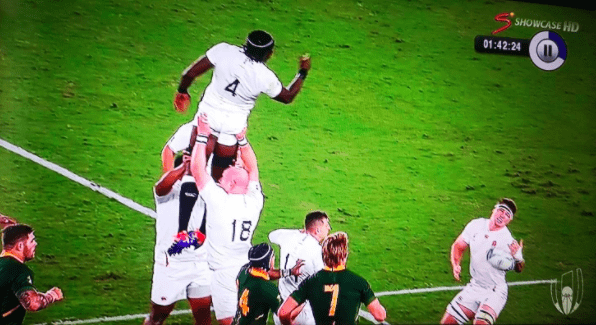 England, say the ITV commentary team (Laurence Dallaglio and Ben Kay), have weathered the storm and could now, “start imposing themselves on the game.”

South Africa kicks off. Maro Itoje is raised high to catch the ball, but it passes his outstretched fingers.  No problem, man of the Australia match, Tom Curry, is well placed behind him to take the ball. Except he drops it.

The resulting scrum yields a penalty, which Pollard goals. Despite a really good passage of play, another soft error means England is behind again. 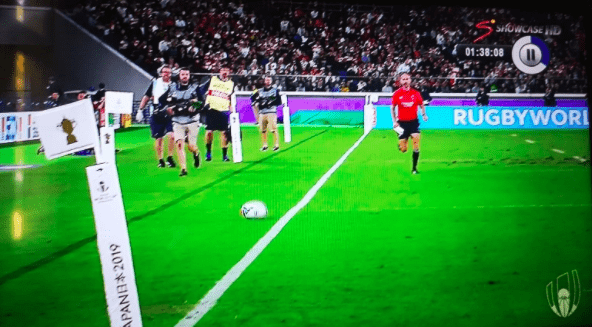 England in possession on the half-way. Fly-half George Ford spots an open space in the Springbok half. He thinks of bouncing the ball into touch somewhere within the South African 22. This would force South Africa into a defensive lineout. Perhaps this is not a bad option. Although South Africa has the best lineout in the tournament, there is always scope for things to go wrong with a defensive lineout (as England experienced against New Zealand.) Moreover the kick required is not that difficult. It doesn’t really matter if it bounces out or stays in. In fact the ideal kick will end up about ten metres from the South African try-line forcing the Springboks to scramble the ball out and concede the lineout.

Ford kicks, quite unnecessarily he tries for the perfect bounced-out touch-finder, but he overcooks it and the ball goes directly into touch. Another unforced error means hard won possession is surrendered and no territorial gain made.

For some 4 minutes, England relentlessly attack the Springbok try-line. England’s physicality is immense. England’s recycling is impressive. Every English player is showing determination and commitment, with Billy Vunipola being a particular threat to the defenders.

After 25 phases the ball goes wide. The wide attack never looks dangerous and fizzles out when the ball is knocked-on. The players are called back for a penalty for a previous Springbok infringement.

The ITV commentary team describes it as England’s best phase of the match and no one would disagree. Certainly it was a big play. Which England won? Right?

Joel Stransky asks which team would feel more joy from the passage of play. England he feels will be pleased with the way they dominated, but South Africa would be equally pleased with not conceding a try or a yellow card.

Another World Cup winning fly-half, Johnny Wilkinson questions sending the ball away from the forwards, when there is no clear opportunity out wide. He feels if the ball is kept in the forwards, they will eventually prevail.

After the teams are called back for the penalty, Farrell evens the scores.

But was this the right decision? 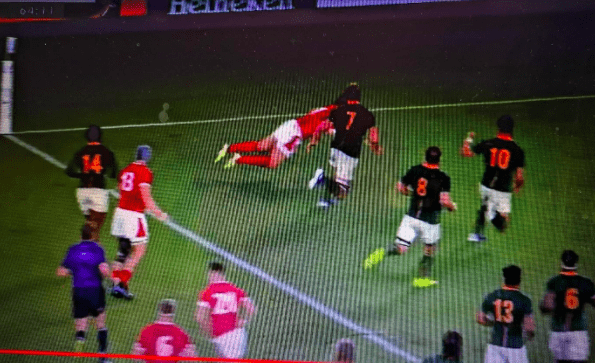 In the semi- final Wales were awarded a penalty in a similar position. Most South African supporters were amazed when Wales opted for a scrum. Surely a Welsh eight couldn’t hope to push over a Springbok scrum?

It soon became clear this was not the plan. The Welsh backs were spread each side of the scrum. A quick heel, the ball went out to the left and Josh Adams was in for a try.

What the wily Warren Gatland had realised is the Bok defence is at its best when Pieter-Steff du Toit is nailing the fly-half and Faff de Klerk is running among the opposition backs causing confusion. With a first receiver on each side of the scrum, de Klerk felt he had to sack the scrum half; in fact Ross Moriarty picked up the ball and engaged de Klerk before feeding the ball to the scrum half which created an overlap. Moreover  Du Toit could not commit until Wales did  which meant for once du Toit was seen arriving on the scene too late to make a difference as Josh Adams scored an easy try.

The Bok defenders were taking considerable strain after defending for 25 phases. Beast Mtawarira made 5 tackles and subsequently said his shoulders were numb. Earlier, Etzebeth had gone down with a bruised shoulder – what was he going through now? Vermeulen later also had treatment for a troublesome shoulder. The Springboks were a physical side, but could they have sustained defending for another 25 phases without losing Etzebeth? Vermeulen? The Beast?

The referee having decided the Springbok scrum was dominant, it was always odds-on that the Springboks would be awarded more penalties than England. Thus it was unrealistic to expect England could eke out a 15-12 or 18-15 win. England simply had to score a try.

A try at this stage could easily be decisive. The early try against New Zealand clearly gave a huge lift to the English players, a lift they certainly could have done with in the Final. In 2003, the pool match against England was close before South Africa had a kick charged down which let in Wilf Greenwood to score. After that South Africa never looked like winning.

England had shown ambition earlier in the game by trying two set plays in their own half – with their forwards rampant, it would have been the right time to show more ambition and go for the try.