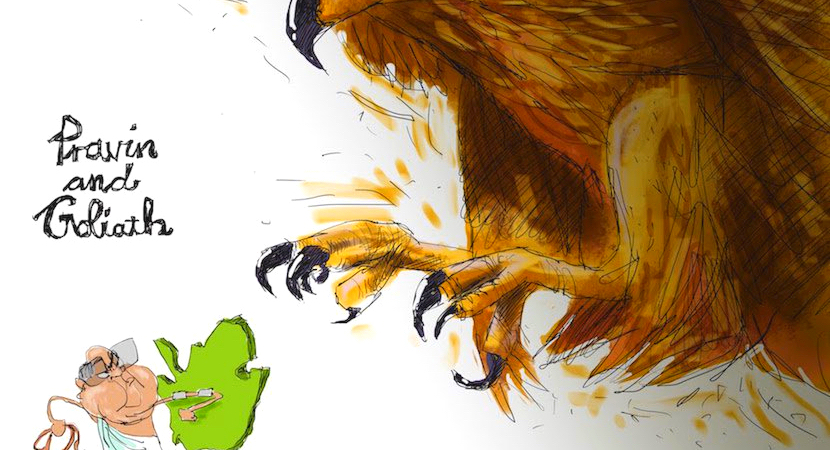 EDINBURGH — Former finance minister Pravin Gordhan was not being paranoid when he highlighted nearly two years ago that there was a sinister conspiracy by political enemies to get him out of the way – even if it meant tying him up in a criminal investigation. An email unearthed in the #GuptaLeaks by Forensics for Justice’s Paul O’Sullivan provides more evidence that the Gupta family – and in particular Nazeem Howa, CEO of Gupta-linked Oakbay – was at the centre of the battle for control of the South African Revenue Service. It indicates that Howa asked Bell Pottinger for assistance in preparing to control any reputational damage as it seemed evident the Oakbay-Gupta empire would be drawn into the controversy. – Jackie Cameron

Gupta man Nazeem Howa, former CEO of Gupta company Oakbay, and Bell Pottinger employee Nick Lambert were in touch with each other to discuss a strategy to protect the Gupta entity from fall-out. This was as early as February 2016 as the battle being waged by former finance minister Pravin Gordhan and South African Revenue Service (Sars) commissioner Tom Moyane spilled out into the open.

At this time, Gordhan warned that political enemies were seeking to discredit him. He was accused of setting up a ‘rogue’ unit.

Gordhan has taken a firm stand against state capture and corruption. He was axed as finance minister after clashing with Gupta companies that were battling to find a bank to process its big transactions. The Gupta family is widely acknowledged as pulling the political levers of power, with President Jacob Zuma installing the captured and corrupt across state entities, government and in Parliament. Zuma’s son Duduzane works for the Gupta family.

In an indication that Bell Pottinger and the Gupta family were involved in the Moyane-Gordhan battle, a leaked email reveals that Howa gave his “media team” an early warning that Gupta entities and Bell Pottinger could be “dragged” into the scandal. Forensics for Justice’s Paul O’Sullivan shared the correspondence with BizNews.

The email from Howa to the “media team” about a Business Day article headlined “Moyane must go or I go – Gordhan” indicates that the Oakbay CEO was keenly aware of his, and his employers’, role in stirring up political trouble.

The article detailed how the then finance minister delivered an ul­ti­ma­tum to resign from the Cabinet as a result of the se­ri­ous de­te­ri­o­ra­tion in his re­la­tion­ship with Moyane.

Business Day noted that the move “would have weak­ened the rand and caused re­newed chaos in SA’s mar­kets”.

Howa told Lambert: “I fear we will be dragged into this matter at some point.  We will [need] to pre plan for that day.”

A reply from a non-Bell Pottinger address, signed off by Lambert, aimed to put Howa at ease. Referring to an article by Andrew England of the London-based Financial Times, Lambert reassured Howa: “Merely fyi, below is Andrew England’s take on the statement. No action required at our end. Best, Nick.”

An investigation was instituted by the controversial Hawks squad against Gordhan with a view to getting him arrested for espionage.

Bell Pottinger collapsed earlier this month after clients deserted the company in their droves in connection with the Gupta state capture scandal. Before Bell Pottinger folded, Lambert was reportedly considering suing Bell Pottinger. He was suspended along with Victoria Geogheghan when former Bell Pottinger CEO claimed that he was not aware of the pair’s dirty deeds in South Africa.

I fear we will be dragged into this matter at some point.  We will to pre plan for that day
–––
Moy­ane must go or I go — Gord­han 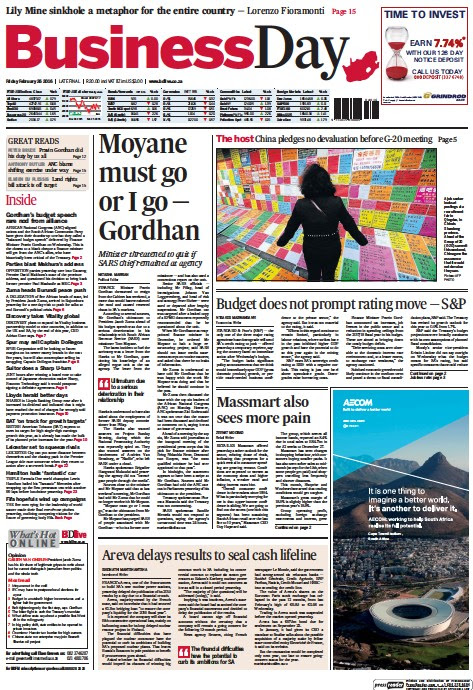 Merely fyi, below is Andrew England’s take on the statement. No action required at our end.

Pravin Gordhan, South Africa’s finance minister, launched an extraordinary attack against political enemies whom he said had tried to intimidate him before a budget this week deemed crucial to restoring the government’s credibility.

Mr Gordhan, who is battling to steer the nation out of economic crisis and curb state spending, lashed out “at a group of people that are not interested in the economic stability of this country and the welfare of its people.It seems they are interested in disrupting institutions and destroying reputations.”

He made the claims after media leaks revealed he had received a letter from the Hawks, a special police force, questioning him about an allegedly rogue investigative unit within the South African Revenue Service (Sars).

The finance minister did not name the people he said were seeking to discredit him. But his outburst is a sign of the factional infighting in and around the government of President Jacob Zuma, between those seeking to crack down on rising waste and corruption and those wanting to protect vested interests.

The rand fell nearly 4 per cent against the dollar on Friday.

Mr Gordhan previously headed Sars, where allegations have swirled that the unit within the tax authority was spying on senior officials. Members of the unit have consistently denied it was involved in any wrongdoing.

The unit that has been at the centre of Sars controversy was set up when Mr Gordhan led the agency. He said it and “subsequent investigative units, were legally constituted and approved at ministerial level”.

Mr Gordhan returned to the Treasury in December after Mr Zuma replaced two finance ministers in four days in a bungled reshuffle. He has since been locked in a battle with Tom Moyane, the current Sars commissioner, and another presidential appointee.

“It [Mr Gordhan’s accusation] is an explosive statement, going to the heart of the systemic abuse of organs of state to further narrow, factional, political interests at the expense of the national interest,” said Lawson Naidoo, head of Casac, a civil society organisation. “It is of particular concern that such overt political shenanigans have taken hold in Sars, an institution previously held in high esteem.”

Peter Attard Montalto, at Nomura, said the market “learnt more fully today that Pravin Gordhan’s reappointment was not a victory for the right-thinking forces within the ANC [ruling African National Congress], but instead just a revision to the status quo.”

Analysts say both the Hawks and Sars, which was long seen as one of the country’s most credible institutions, have become caught up in the political meddling plaguing state entities under the Zuma administration. The commissioner and deputy commissioner of each agency were suspended last year.

Mr Gordhan said he received a letter from the Hawks six days before Wednesday’s budget, asking him to answer three pages of questions. He said it was “meant to intimidate and distract us from the work that we had to do to prepare the 2016 budget”.

The finance minister said that, if necessary, he would take legal action to protect “myself and the National Treasury from whatever elements seeking to discredit me, the institution and its integrity.”

Facing a backlash from business, unions and from within his African National Congress party, Mr Zuma then appointed Mr Gordhan — who served as finance minister from 2009 to 2014 — in a dramatic U-turn.

“Some people in the state have clearly not learnt the lessons of Nene-gate in December and are trying to remove Pravin Gordhan,” Mr Attard Montalto said.

The presidency said in a statement in response to the Sars controversy that Mr Zuma “has full confidence in Minister Gordhan.”

But it said it would not comment on the matters to Sars “as this may wittingly or unwittingly impact on their work and independence” of law enforcement agencies.
________________________________________
From: Nick Lambert
Sent: 26 February 2016 17:23
To: Media Profile
Cc: List-SouthAfrica
Subject: Gordhan statement
Just fyi, and am sure you’ve already seen…but here is a link to Gordhan’s statement of a short while ago.
http://www.techcentral.co.za/statement-by-pravin-gordhan-full-text/63520/
He speaks of:
“…a group of people that are not interested in the economic stability of this country and the welfare of its people. It seems they are interested in disrupting institutions and destroying reputations.”
Best, Nick