EDINBURGH — Naspers is a critical component of many South African investment portfolios. And, heavily weighted on the Johannesburg Stock Exchange, Naspers influences the main market indices. Naspers is a beast of a company, with interests in businesses around the globe, and, as such, is difficult to dissect by investors. Freelance writer Ted Black has attempted to make sense of Naspers through a ROAM (Return On Assets Managed) lens. His findings make for stomach-churning reading if you are a Naspers shareholder. In a nutshell, Black is pointing to Naspers destroying wealth rather than creating it. – Jackie Cameron

Naspers, with its heavy weighting on the JSE, is a constant topic for business journalists and asset managers. As Tim Cohen wrote in Business Day the other day: “How do you make sense of the company? It’s just mind-boggling.” He’s right.

Highly diversified both in terms of business activity and geography, some firms in the group are wholly owned and managed, others it has stakes in. Some must make money, and some don’t. But apart from Tencent, you don’t know who does well and who doesn’t.

One asset management firm says it does “very detailed fundamental analysis” and that its analyst has met Naspers management many times and visited many other competitors over 10 years. Its detailed research, and “pragmatism”, allow them to back their “high conviction ideas” for holding a big chunk of Naspers shares in their portfolio.

I have no idea what “fundamental analysis” entails, but let’s have a look through a ROAM lens instead. After all, it is quite fundamental, especially Cash ROAM. First, compare EBIT or Operating Profit with Profit before Tax (PBT). 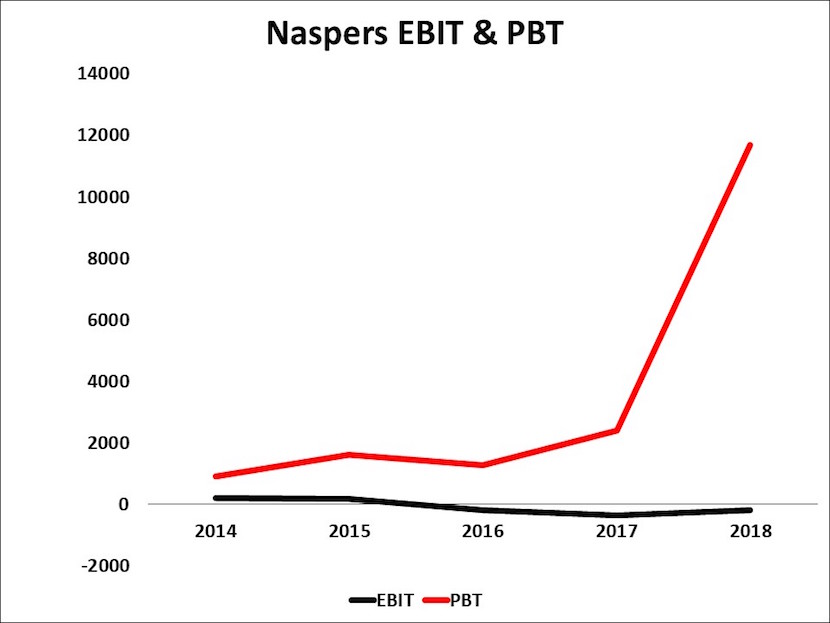 For the past five years, profit from equity investment stakes, has never been less than 100% of profit before tax and EBIT was negative the last three years. Next, look at the Cash EBIT and its two components. 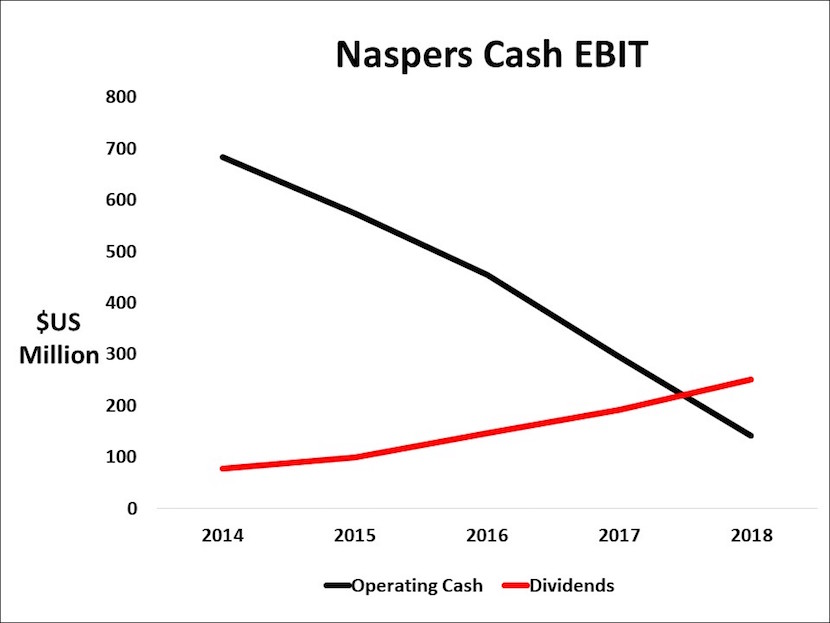 Operating cash comes from firms it manages, and cash dividends from investments. The two make up total “Operating Cash” before interest and tax. Dividends are now the biggest contributor to Cash EBIT. Since 2014, Cash from operations has fallen from $683 million to $141 million. Does it mean all the companies managed by Naspers are battling or are no longer significant in the scheme of things?

Next, look at Free Cash Flow after investing activity. 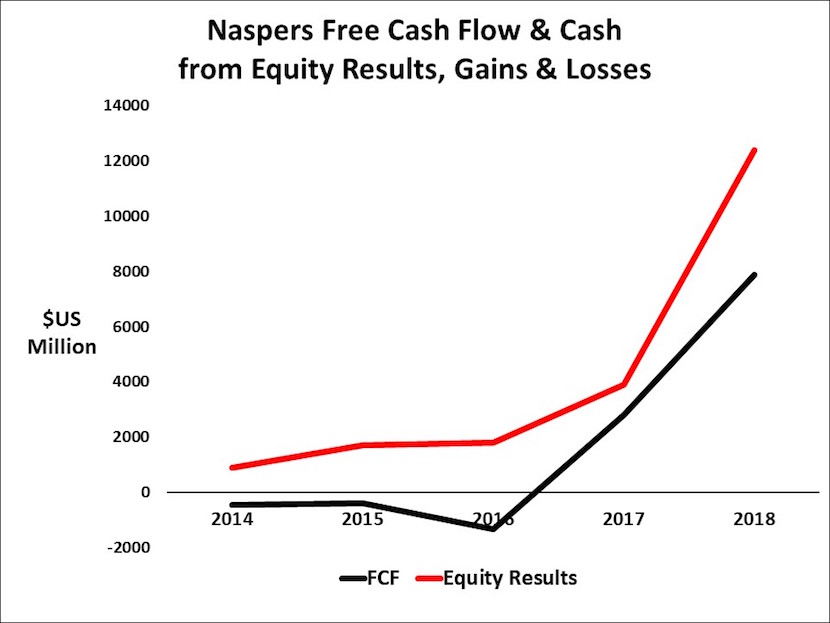 Until 2016, Free Cash Flow was negative despite selling stakes in the portfolio. With increased activity and by cashing in part of the Tencent investment, cashflow has improved dramatically – but not through asset productivity, the most important measure in the ROAM equation. The correlation between Naspers’ ATO and its profitability is perfect. 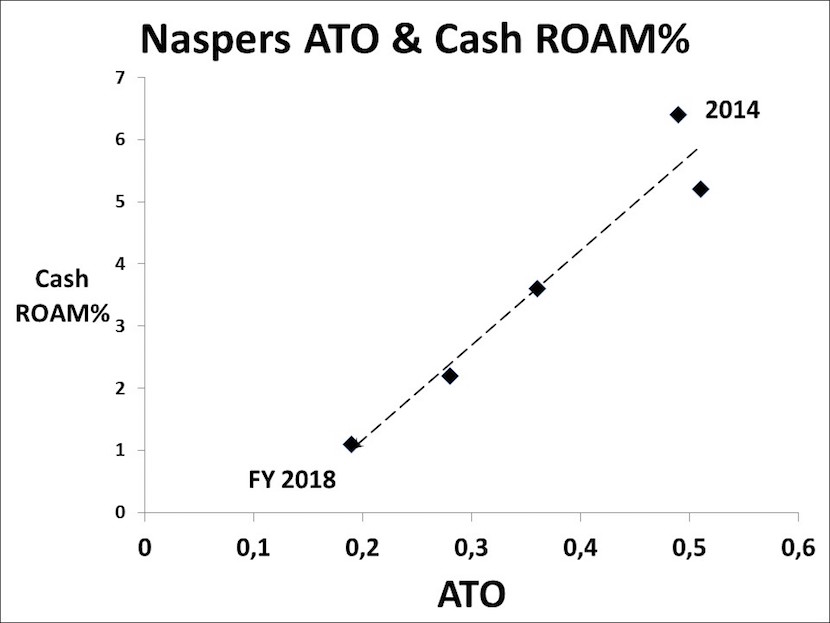 Low ATO also has a big impact on the last cash measure. As Peter Drucker put it, “Until a business returns a profit greater than its cost of capital, it operates at a loss. Never mind that it pays taxes as if it had a genuine profit. The enterprise still returns less to the economy than it devours in resources. It does not recover its costs unless the reported profit exceeds the cost of capital.  Until then it does not create wealth, it destroys it.”

To calculate this number I assumed, rightly or wrongly, that a target of 20% Return on Equity be applied. This is five percentage points above the average of 15% that seems to be achieved in the USA and UK. Here is the picture since 2014. 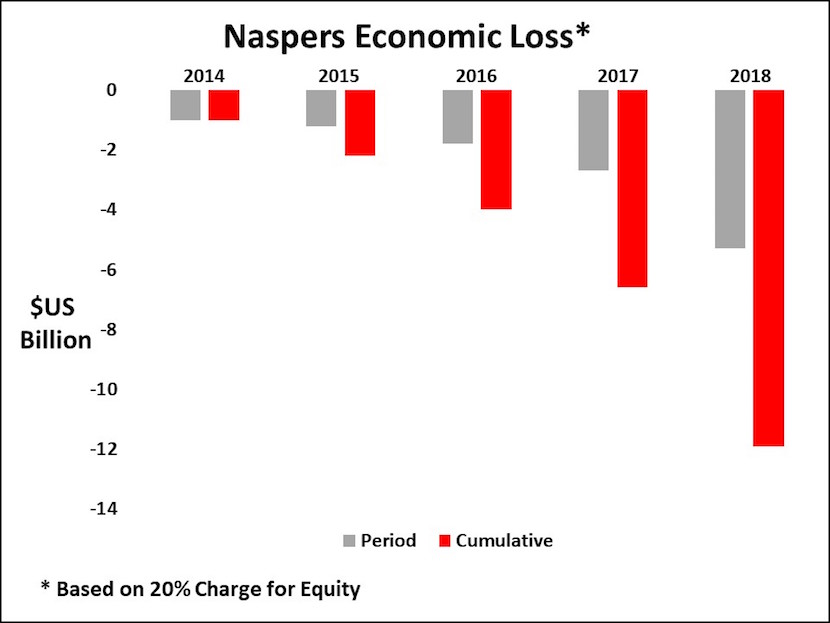 The calculation is Cash Profit After Tax minus the 20% Cost-of-Equity. The cumulative economic loss over five years is just under $12 Billion and at a 15% Cost-of-Equity, it would be $8,8 Billion. As they say, comparisons are odious. But in the same way Steinhoff’s declining asset productivity and massive cumulative economic loss was signalling trouble ahead, don’t the last two slides warn the same thing for Naspers? The only way it seems capable of making a decent return now, is by cashing in its investments.

Does that mean it should rather be measured as a “Venture Capitalist” and not with the fundamental management yardstick – Return on Assets? The only measure that looks any good at all, is the Free Cash Flow return on Equity which has gone from minus 14,2% to a positive 31% in three years. Is that how a venture capitalist would measure his or her effectiveness?