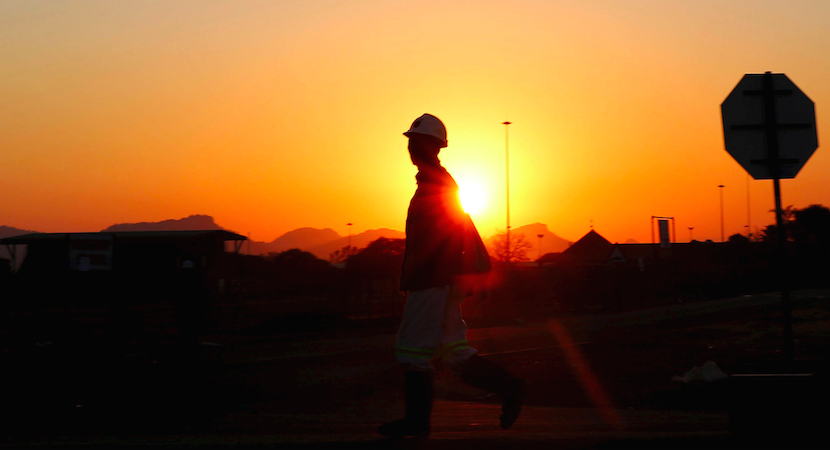 LONDON – South Africa’s mining sector is in the top five in the world in terms of its GDP-value. It is also the sector that President Cyril Ramaphosa regards as crucial to reversing sluggish economic growth. The mineral wealth should be a huge blessing, but ActionAid says it is not for communities living around the mines. It based its findings on surveys of communities living near mines owned by Anglo American Platinum, Exxaro and Harmony Gold in seven of the nine provinces. 80% said it brought “no positive impact at all”, 8% felt it brought misery to the locals and 13% saw no benefit. Mining communities complain about “people being pushed off their land, pollution” and gender-based violence linked to the number of men looking for employment. Added to this were “the damage to housing from blasting at the mines, pollution and livestock deaths. Benefits that they have acknowledged are improved employment and infrastructure, but for most the mineral wealth discovered in their area is more like a curse. – Linda van Tilburg

(Bloomberg) – Mines in South Africa, which has the world’s biggest reserves of platinum and chrome, are seen as a benefit by only 13% of people who live in their proximity, a report on the industry’s social impact said.

Four out of five people see no positive impact at all and 8% said mines brought “sickness, dispossessions and damages,” ActionAid said in a report released Tuesday.

South Africa’s economy during apartheid was built on mining and the exploitation of cheap black labour, and the sector, the world’s fifth-biggest, still accounts for about half the nation’s exports. Mining communities often complain about people being pushed off their land, pollution and the violence and sexually transmitted diseases associated with the influx of migrant workers.

People who live close to mines “have remained largely excluded from participating in the development of policies and legislation that directly affects them,” ActionAid said. The advocacy group based the report on surveys of communities near mines owned by Anglo American Platinum Ltd., Exxaro Resources Ltd. and Harmony Gold Mining Co., among others, in seven of South Africa’s nine provinces.

The government took R205bn ($15.2 billion) in tax and royalties from mining companies in the 10 years to 2018, ActionAid said, citing a PwC report. That represents 24% of “value” generated by the companies, while employees took 47% and shareholders 29%. Communities received only R7.5bn, or 0.9% of the value.

The Minerals Council South Africa, which represents most mining companies in the country, said in a response to questions that it disagrees with the PwC figures, saying its members spend R2bn annually on corporate social investment projects.

While deriving few benefits in the form of employment or infrastructure improvements, communities said they have to instead contend with increased violence.

“Strong links were drawn between the influx of men into the community looking for employment and the rapid rise in gender-based violence,” ActionAid said in the report. “This is prevalent in the form of rape, murder and abuse.”

Other negative impacts reported by communities include damage to housing from blasting at the mines, dust, noise and water pollution and the resultant death of livestock. The prevalence of diseases such as HIV, tuberculosis, silicosis and cancer were also seen to have risen in some cases.

While mines are by law required to have a Social and Labour Plan and communities are supposed to be aware of it, 91% of 690 respondents in the report said they were unaware of the contents of the plans of the mines in their areas.

“The approach to mining in South Africa has been a violent, masculine and exploitative project to concentrate benefits for a few at the expense of a majority,” ActionAid said. “The potential wealth in mining has had a significant influence over the political arrangements of South Africa, and has historically been the main driver underpinning the apartheid economic model of wealth accumulation.”