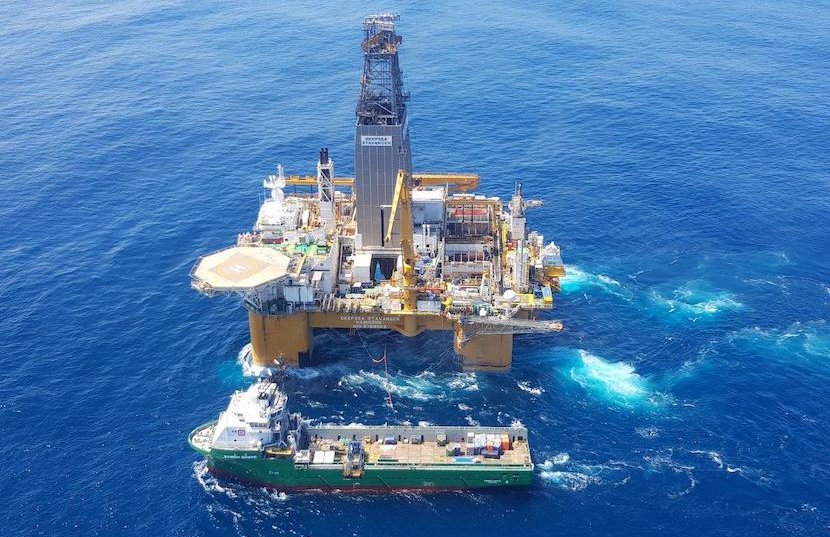 LONDON — South Africa’s long wait for a meaningful oil and gas discovery ended yesterday when an exploration consortium headed by French group Total announced a gas find of about a billion barrels of oil equivalent in the offshore Southern Outeniqua Basin which runs parallel to the Southern Cape coast. The find is enough to cover South Africa’s imported fuel requirements for the next four years. The strike is 175km offshore in the imaginatively named Brulpadda Prospect which is part of the Paddavissie Fairway – part of an 18 000 square kilometre block which Total has been prospecting for some years. Exploration stalled in 2014  due to difficulties experienced in the harsh deepwater environment. It was only restarted in December by drawing on experience gained in similar environments elsewhere. There is hope for still more discoveries as four additional prospects have been identified within the Paddavissie Fairway, all exhibiting the same kind of geological results from 2D seismic and electromagnetic surveys. For context, a similarly sized discovery in the Mexican Gulf last month by BP made international headlines. – Alec Hogg

“Even though the well isn’t an oil discovery, if Brulpadda proves to be anywhere near as big as the estimates of up to 1 billion barrels of oil equivalent resources, it will still be a game-changer for South Africa.”

He added: “Brulpadda is also an early validation for Qatar Petroleum’s international exploration strategy. The company has focused exclusively on high-impact deepwater prospects operated by Majors.”

Total plans to follow up the discovery with 3D seismic and wells on up to four more similar prospects on the block, 11B/12B.

Dr Latham said: “If these wells come in too, they can only add to the potential bounty for South Africa.

“This is Total’s second bite of the Brulpadda cherry, having suspended its previous attempt at the well in 2014 due to harsh weather.

“This time around, with a more capable rig, the Deepsea Stavanger, and the weather gods smiling, there have been no such problems.

“The Cape’s metocean conditions could present difficulties for any development, but would be on a par with the West of Shetland, a region Total knows well.”

The discovery could prove a catalyst to restart South Africa’s gas-to-power programme, as well as replenishing gas supply to the Mossel Bay gas-to-liquids plant.

Akif Chaudhry, principal analyst, commodity analytics, said: “While a strong case can be made for the development of the gas economy, long-term growth requires a clear plan from government.”

“We expect the power generation sector to drive gas demand growth. However, at present, all South Africa’s open-cycle gas turbine units are set up to run on diesel. The country’s gas infrastructure is also limited, designed mainly to deliver gas to the Mossel Bay plant and to import piped gas from Mozambique.”

The Brulpadda find, estimated at about 1bn barrels by Total Chief Executive Officer Patrick Pouyanne, could be enough to supply South Africa’s refineries for almost four years. That’s a boon for a country that has always been short of oil and is running out of its scant domestic supply of gas.

“It is really transformational,’’ Andrew Latham, vice president of global exploration at consultant Wood MacKenzie Ltd., said Thursday. “This could be a discovery that kickstarts a bit of a gas strategy for South Africa.’’

The field of primarily gas-condensate – a light liquid hydrocarbon – was discovered about 175 kilometres (109 miles) off the country’s southern coast in the Outeniqua Basin. The area, where Exxon Mobil Corp. and Eni SpA also hold stakes, may now draw further interest, especially since South Africa is due to introduce new legislation later this year aimed at spurring exploration.

The find “is potentially a major boost for the economy,” Minerals Minister Gwede Mantashe said. “We welcome it as we continue to seek investment.”

President Cyril Ramaphosa is seeking to lure $100bn of investments by 2023 to revive a struggling economy. The country’s energy supply is largely based on coal, while state power utility Eskom Holdings SOC Ltd. also runs turbines on costly diesel fuel. A failed exploration campaign in shallow waters has meant a gas-to-liquids refinery at Mossel Bay runs well below capacity.

Total’s discovery is a “catalytic find” for the country, said Niall Kramer, chief executive officer of the South African Oil & Gas Alliance, an industry lobby group. “There’s nothing that has been on this kind of scale.”

The resource could be about three times the size of all South Africa’s gas finds to date, according to WoodMac’s Latham. Total, the operator of the license, now plans to acquire 3D seismic data before drilling as many as four more exploration wells there. But it cautions that the operating environment offshore is tough.

“The region is quite difficult to operate,” Pouyanne said on a conference call. “Huge waves, the weather isn’t very easy.”

Africa as a whole has seen an increase in drilling, with oil and gas rigs around the continent topping 100 in recent months, according to Baker Hughes data. The count was as low as 77 in 2017.