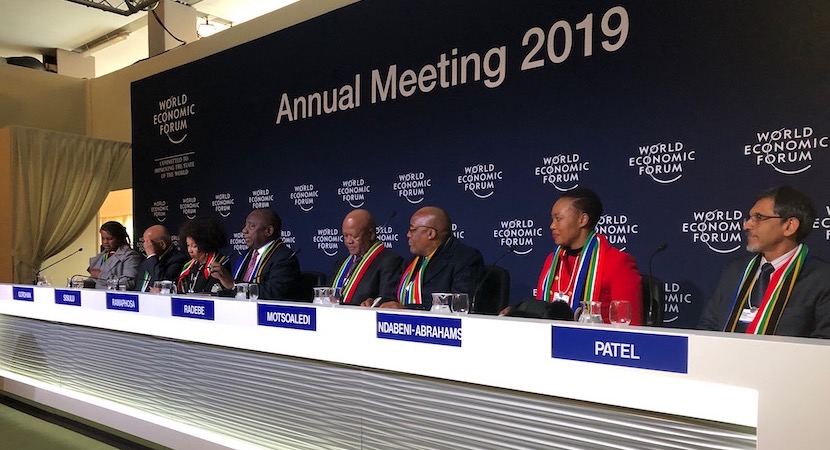 DAVOS — SA president Cyril Ramaphosa has a wonderful way with the media. He goes out of his way to make time to greet journalists, mindful of the power such authentic engagement delivers. Ramaphosa is also adept at spotting sound bites the mass media loves, delivering a classic when summing up today’s press conference: “I’m a fisherman and here in Davos we’ve been fishing for investors. I’m confident we’ll come home with a bagful.” Watching him share the questions and sum up, it’s difficult to disagree. He is on top of all the major issues, and like the best directors, was able to add value to the contributions of his assembled cabinet colleagues. Ramaphosa also dealt comfortably with the media’s questions, including potentially uncomfortable ones like the rumour of conflict with Finance Minister Tito Mboweni (who wasn’t present – but because of commitments elsewhere) and the old chestnut of land expropriation (“the debate has been vigorous, a good thing for democracy.”) Were he the CEO of a company, I’d be suggesting an investment in his turnaround business. That’s a big statement and perhaps coloured by Ramaphosa’s personality. But when you run through the list of progress made since he was in Davos a year ago, it’s the rational conclusion. – Alec Hogg

Over the past few years, representatives of the South African government, business leaders, labour leaders and delegates from other sections of society have come to Davos as Team South Africa.

Although we represent different constituencies, we have a common interest in the development of our country and the promotion of inclusive growth.

We therefore come to Davos with a single message, and this year the message is that South Africa is on a path of growth and renewal.

After almost a decade of economic stagnation and political paralysis, we have begun to turn things around.

We have entered a new period of hope and renewal, and over the last year have taken decisive steps to correct the mistakes of the recent past and put the country back on the path of progress that we embarked upon in 1994.

We have placed the task of inclusive growth and job creation at the centre of our national agenda.

Around a third of working-age South Africans are unemployed, poverty is widespread and levels of inequality are among the highest in the world.

We recognise that we cannot create work on any meaningful scale unless we grow the economy at a far greater rate – and for that we need much more investment in the productive sectors of the economy, in infrastructure and in skills development.

Last year, we launched an ambitious drive to raise $100 billion in new investment over five years.

At the inaugural South Africa Investment Conference in October last year, both local and international companies announced around $20bn of investments in new projects or to expand existing ones.

According to a report released by UNCTAD on Monday, direct foreign investment into South Africa increased by more than 440% between 2017 and 2018, from $1.3bn to $7.1bn.

We aim to sustain – and further increase – this growth in investment.

We are dedicating effort and resources to investment promotion and facilitation, having appointed four prominent investment envoys who have been meeting with investors to promote the opportunities in our country.

They have also been engaging in investors on their concerns and expectations, which is greatly assisting our efforts to create an environment that is even more conducive to investment.

Over the last year we have undertaken measures to ensure greater policy certainty and consistency, including economic reforms in sectors that have great potential for growth.

For example, in the mining industry, we finalised a new Mining Charter that balances the need for transformation with the imperative for new investment in an industry that, despite its difficulties, could be growing and creating jobs.

In telecommunications, we have set in motion the process to allocate high-demand radio spectrum to accelerate broadband access and promote competition within the sector.

In energy, we have signed long-outstanding agreements with independent power producers for another round of renewable energy projects and have published a new energy plan for the country for public consultation.

In tourism, we are reforming our visa regulations to encourage more visitors, as well as making it easier for investors and business people to visit South Africa.

In the wake of a recession in the first half of 2018, we announced an economic stimulus and recovery plan to reignite growth.

It included a reprioritisation of public spending towards sectors like agriculture and small business development, which have great potential to make an immediate impact with long-term benefits.

We also announced the establishment of an Infrastructure Fund that would consolidate all public spending on infrastructure and leverage further funding from the private sector and development finance institutions.

The Fund would also harness private sector expertise to bolster infrastructure management capacity in the state.

South Africa has emerged from recession, and although growth forecasts are subdued, we are determined to unlock the many opportunities that exist in our economy.

Another critical undertaking that we have embarked upon is the restoration of the rule of law and the integrity and credibility of our public institutions.

A commission of inquiry into state capture, which is headed by the Deputy Chief Justice Raymond Zondo, has begun in earnest to uncover evidence of the ‘capture’ of several state institutions and processes by private interests.

This state capture has damage several critical institutions, damaged confidence in our economy and resulted in the theft of billions of rands from the state – and from the people of South Africa.

The commission has heard evidence of corruption on a scale far greater than many people had expected.

As difficult and damaging as some of the testimony may be, this is an absolutely essential process that must be seen through to its conclusion if we are to put this shameful episode in our history behind us.

As part of our drive to end corruption – and to improve the safety of all South Africans – we have taken steps to strengthen the National Prosecuting Authority, South African Police Service and State Security Agency.

We have also addressed problems at the South African Revenue Service and are in the process of putting in place new leadership.

We have also taken measures to stabilise several state owned enterprises that had been weakened by state capture, corruption, mismanagement and poor policy decisions.

We have replaced the boards and executive management in strategic SOEs and have been working closely with the new leadership on the implementation of credible turnaround strategies.

We are currently developing a response to the financial and operational crisis at the country’s electricity utility, Eskom.

In the next few weeks, we will be announcing a set of measures to stabilise and improve the company’s financial position and to ensure uninterrupted energy supply.

We are also tackling the contentious issue of land reform, which has generated a great deal of interest globally and a healthy and vibrant debate within the country.

We are dealing with this issues in a manner that takes the interests of all into account, fully in line with the prescripts of the law and our Constitution.

We are taking a comprehensive approach that sees historical redress as an opportunity for greater agricultural output, improved food security, empowerment, job creation and poverty alleviation.

The progress we have achieved over the last year – and the successes we need to register in the months and years ahead – ultimately depends on our ability to revitalise and strengthen the social compact between government, business, labour and civil society to accelerate infrastructure investment, broaden access to, and ownership of, the economy, and create decent jobs.

This is well within our means – partnership and dialogue are integral to the South African DNA.

As Team South Africa, we call on all our people, and all our friends across the world, to join us on the path of growth and renewal.