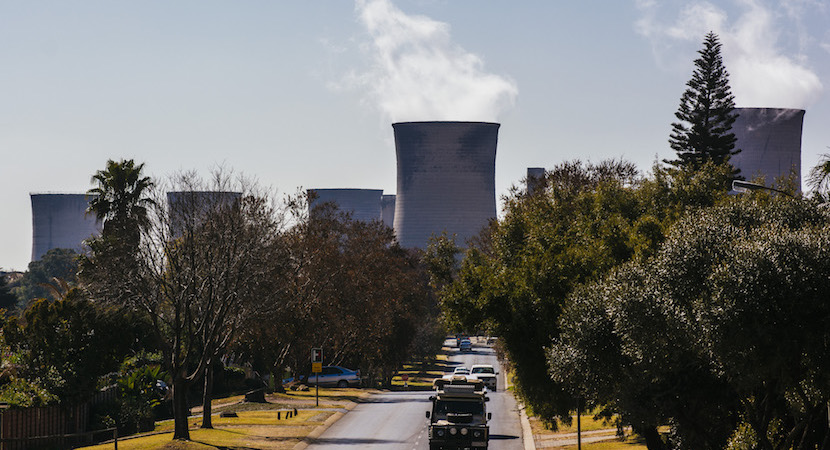 CAPE TOWN — If Eskom were a person, it would be anaemic in the ICU, with an overcrowded waiting room on its collective knees – at least those not punching the air in anger. But Drs Ramaphosa and Gordhan have a plan, which global super-specialists are sceptical of mind, carrying as some do a hidden prognosis ready for display should the slightest additional thing go wrong. Currently, the specialist who’s held out the most hope is called Moody’s, having raised their assessment of the country from negative to stable last March, Eskom being their chief concern. The quality of nursing has arguably deteriorated – either that or the patient was sicker than most of us guessed. Now we must wait one more month to see whether Moody’s will reverse or hold their assessment, just after consultant, Dr Tito Mboweni reveals what medical aid is available. The patient looks shaky. Moody’s are already grumbling about our national prospects, in spite of the emergency Eskom resuscitation bids. Little wonder the utility’s board is demanding an audit of the power system and a probe on why new projects have been delayed. Full disclosure on every single coal contract would be a great start. The waiting room stays abuzz. – Chris Bateman

(Bloomberg) – South Africa’s debt-laden power utility raced to stabilise the grid this week by resorting to the most intense supply cuts in four years.

Eskom Holdings SOC Ltd. implemented blackouts for a third day on Tuesday, removing 3,000 megawatts from the system after so-called stage 4 rotational power cuts, or 4,000 megawatts, on Monday as it moved to avoid total collapse of the grid. The reductions come as Moody’s Investors Service said the producer is a significant risk to South Africa’s finances and President Cyril Ramaphosa’s strategy to split the company into three does little to address its problems.

“No modern economy can operate without power,” said Mike Schussler, an economist at economists.co.za. “If we had stage 4 load shedding every day, it would take away 10% of the power of the South African economy.” Eskom has about 40,000 megawatts of installed generating capacity.

The rand was the worst-performing major currency against the dollar Monday, while yields on benchmark government rand bonds rose the most since October. The rand gained 0.2% versus the dollar on Tuesday. 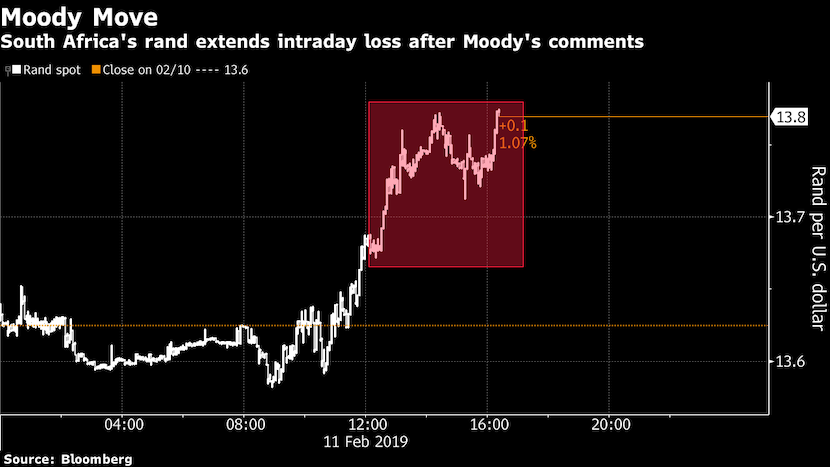 Providing Eskom, which has R419bn ($30bn) of debt, financial support before taking measures to generate savings at the utility would be credit-negative for the country, Moody’s said. The remedies would entail “unpopular decisions” on electricity tariffs, it said.

Eskom’s board held urgent talks with management and Public Enterprises Minister Pravin Gordhan on Monday, and called for an audit of the power system and an investigation on why new projects have been delayed, it said in a statement.

Medupi and Kusile, two new plants that will rank as among the world’s biggest coal-fired facilities, are years behind schedule and significantly over budget.

Power cuts may cost the country as much as R5bn a day, according to the Organisation Undoing Tax Abuse, a civil-society group.

I don’t think South Africa’s national utility Eskom has ever before invoked stage 4 load shedding. I hate that term. What it means is they’re cutting power for lots of us because they can’t keep their power stations operating. They’re effectively a monopoly. We need more options

Regular supply interruptions are creating uncertainty that endangers businesses that are highly dependent on the utility, said Shaun Nel, a spokesman for the Energy Intensive Users Group of South Africa, whose members consume more than 40% of the nation’s power and include Anglo American Plc.

“We’re going to see companies close in the smelting industry,” Nel said. Between already-high tariffs and the spectre of more supply cuts, the victims will be “small foundries and smelters that shut down and never come back,” he said.

Eskom has asked for permission to raise power tariffs by 15% in each of the next three fiscal years, more than triple the average inflation rate over the past 12 months. If allowed, this would ease the government’s contingent-liability risk but stoke inflation and weigh on economic growth, said Moody’s. Small price increases would “maintain pressure on the company’s very weak financial profile,” it said.

A breakup into generation, distribution and transmission businesses will enable each unit to better manage costs and make it easier to raise funding, the government said. Credit-rating companies see Eskom as a key risk to Africa’s most-industrialised economy, with blackouts and huge debt a drag on growth prospects.

Today’s debate on CR’s state of the nation should be a massacre. Nothing says “nine wasted years” quite like Eskom imploding in real time.

Moody’s is the only one of the three major ratings companies that has South African debt at investment grade. It raised the outlook on the assessment to stable from negative in March and will publish its next assessment on March 29, a month after the release of the 2019 budget.

Moody’s comments are a reminder that major structural issues such as power insufficiency are serious constraints on the real economy and put pressure on public finances, said Piotr Matys, London-based emerging markets currency strategist at Rabobank.

“Those issues pose a major challenge for President Ramaphosa’s administration,” he said.