On Rational Radio this week, Allan Gray director Duncan Artus suggested that instead of quoting gold in their news bulletins, radio stations would do better to keep the nation informed about the Naspers share price. Because Naspers is far more relevant to the wealth of SA citizens nowadays than the once mighty gold mining industry. The company is such a major part of the JSE’s index weightings that every South African with retirement funding has a significant interest in what happens at Naspers – whose 31% shareholding in Chinese internet giant Tencent is easily the nation’s biggest external asset. And right now there’s nothing to worry about on that front: core headline earnings in US Dollars rose 26% in the year to end March, bringing a much needed ray of sunshine to a JSE that’s been struggling, and a nation hit by the past week’s bad news about the massive cost of having to bail out Eskom. The piece below unpacks the highlights of a splendid year for SA’s global internet champion.  – Alec Hogg

“This was a transformational year for Naspers. We entered FY20 well positioned as a global consumer internet group.” – Bob van Dijk, Group CEO. 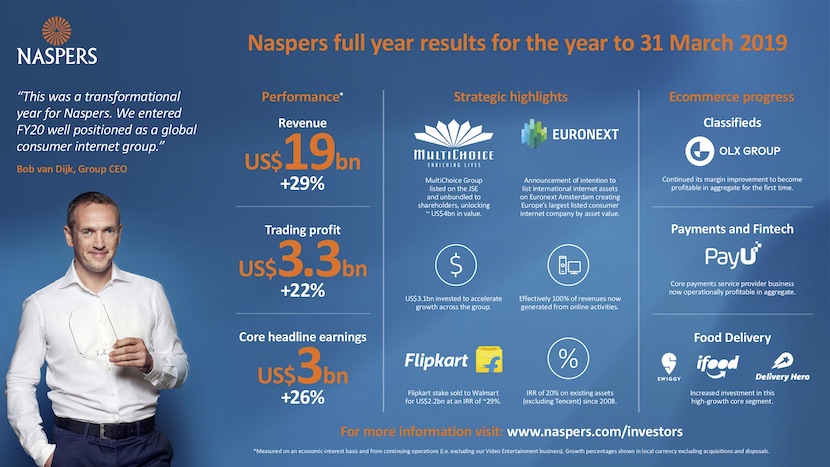 Group highlights for the year

See “Notes” section for an explanation of the numbers

“We executed well during the past financial year, growing revenue 29% to US$19.0bn, and trading profit 22% to US$3.3bn. With continued focus on accelerating growth in our core segments, the Classifieds and core payments service provider businesses are now profitable. Trading-loss margins in etail and the rest of the payments and fintech business narrowed as the businesses delivered solid revenue growth and continued to scale. We have broadened our ambitions in Food Delivery, which is an exciting, meaningful and rapidly transforming opportunity fuelled by a significant reallocation of consumer spending to this growing sector. Our progress gives us confidence in our ability to continue to identify opportunities that can create significant value going forward.”

“This was a transformational year for Naspers. We entered FY20 well-positioned as a global consumer internet group. The listing and unbundling of MultiChoice Group unlocked around US$4bn of value for Naspers shareholders, and virtually all group revenues are now generated from online activities. At the end of the financial year, we also announced our intention to list our international internet assets on Euronext Amsterdam. This is designed to create a strong platform for continued growth while also reducing the outsized weighting of our primary listing on the JSE Limited. Looking ahead, we will continue to drive profitability in our established ecommerce segments while selectively investing in earlier stage opportunities.”

“The team made good progress this year, delivering a solid financial performance while continuing to take action to create value for our stakeholders. We are executing well on our strategy to build meaningful global businesses in the online classifieds, payments and fintech, and food delivery sectors. ”

The complete results are available at www.naspers.com/investors.