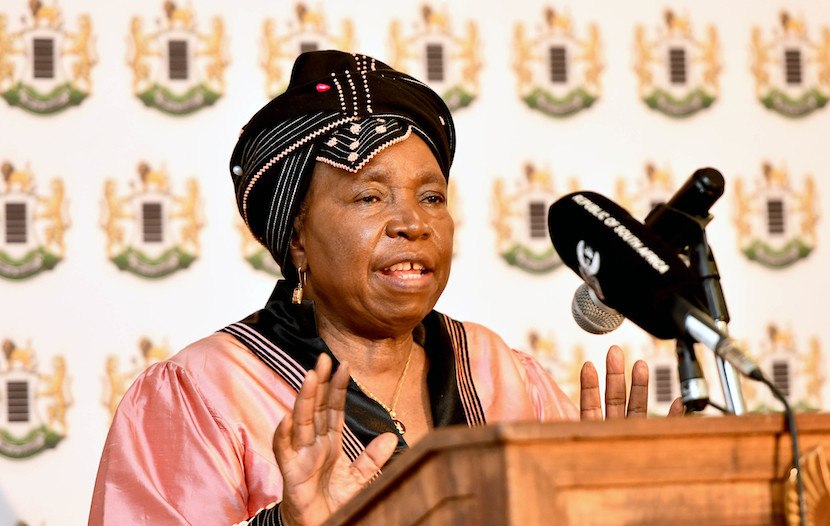 For the last two years, South Africa has been in a constant national state of disaster, granting the government extraordinary powers. Despite speculation that the world’s longest lockdown would finally come to an end on Tuesday, 15 March, a short Tweet at 9 am from the Co-operative Governance and Traditional Affairs Ministry put that notion to rest. The national state of disaster – which keeps several Covid-19 regulations in place – has been extended by yet another month. Prof. Dewald van Niekerk, head of the African Centre for Disaster Studies at the North West University, believes it won’t be the last extension. He admits that if anyone had told him three years ago that South Africa would be in a constant state of disaster for over 24 months, he would have called them a liar. I asked Van Niekerk whether we are still in what could legally, or otherwise, be considered a state of disaster. No, is the simple answer. But nothing about how the government has managed Covid-19 has been simple, terribly logical, or transparent. There is a trust deficit between society and government that makes us almost incapable of accepting that what is proposed is for the common good. Who’s getting a cut? Who stands to benefit? Which cadre is getting rich? These cynical – although not completely unwarranted questions – persist. It didn’t take long for the Democratic Alliance and other opposition parties, civil society organisations and NGOs to announce their intention to legally challenge the extension. The DA tweeted, “The extension of the National State of Disaster is nothing but a power grab in order to continue to give ANC comrades easy access to Covid-19 funds, and to trample upon Constitutional rights.” Van Niekerk points out that this legislation has been challenged numerous times and has proven rather robust before the courts. – Michael Appel

I don’t think it should come as a big surprise to any of us. The state of disaster has been extended so many times before, and the reason given is that the Covid-19 regulations must stay in place. Since the previous call for the discontinuation of the state of disaster, we haven’t seen the government move significantly on putting these regulations under any other legislation. That is the main reason why we find ourselves in this position once again.

On whether we’re technically still in a disaster

If we look at the definition of a disaster, which would govern the state of disaster, we cannot justify why we find ourselves in a state of disaster; not if we apply the letter of the law. The difficult portion is the risk associated with the Covid-19 pandemic. We still need to manage an unknown future and, in order to do that, the Disaster Management Act as it has always been very progressive in the sense that it allows us to be more proactive than reactive in our actions.

They started talking about the transition out of the state of disaster towards the end of last year. If they developed new regulations under the Health Act, it gave them at least a three-month period of consultation. That is the normal period under the Health Act. It can be fast-tracked. I think government had ample time to put these measures in place. I believe the process must just run its course. But as we have seen with government, there’s a fair amount of feet dragging happening and we consult until death … with the wrong groups sometimes. 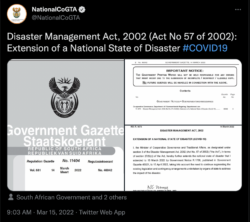 On ever expecting it would be extended so often

I would never have thought we would be in this situation. When we drafted the Disaster Management Act, the discussion was about our worst-case scenario and we had to promulgate a state of disaster. This discussion was held at all three levels of government. The focus was on drought at the time. We looked at if we could not do what was required on a national level within three months, to extend it on a month-to-month basis, up to probably six months maximum. Never in my wildest dreams would I have imagined it would be used for the extension on a month-to-month basis 22 months later.

On lack of oversight in deciding to announce extension

On the likelihood the state of disaster will be extended again

If I had to bet, I would say it’ll be extended again by mid-April because of the fear of a fifth wave of Covid-19. We don’t have the complete future picture yet but it would probably make sense for them to extend again. If I was in the minister’s shoes, I would just take the punches and extend it beyond April and then put the new regulations in place.