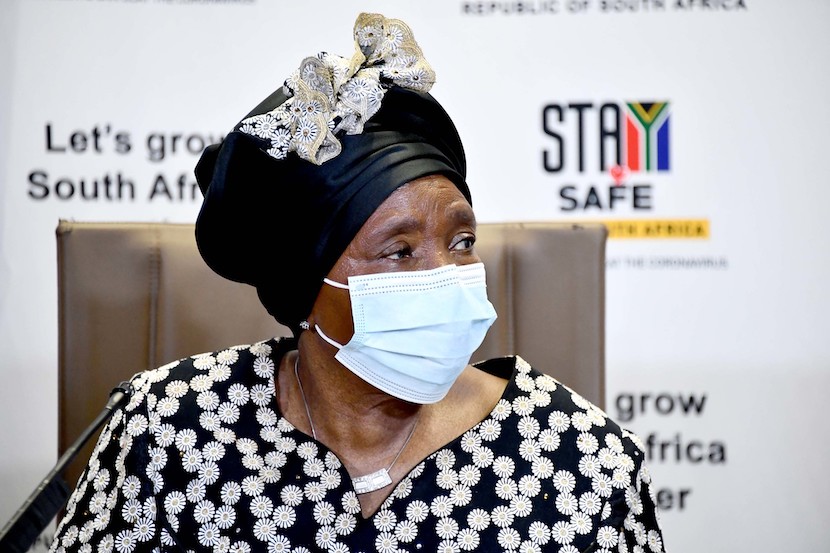 Historically, politicians have reached for more power during times of crisis and, during the Covid-19 pandemic, many governments round the world broadened their powers and abilities to tackle the pandemic. Civil liberties were curtailed and surveillance initiatives increased with contact tracing apps and digital-tracking measures. Even physical surveillance initiatives were adopted in 27 countries with some using drones to enforce lockdowns, according to the Covid-19 Digital Rights Tracker. In South Africa, the Disaster Management Act has been in place since March 2020 and it has just been extended for another month until 15 November. Under the extended powers available to the state, there have been several incidences of brutality by the security forces, including the killing of Collins Khosa in Alexandra. These measures were meant to save lives but there is a danger that these powers – that start out as an exception – can frequently become the norm. Anthea Jeffrey writes in the Daily Friend that the Covid-19 death toll is now sharply down, as is the daily number of new infections and that the government “had 19 months to develop better legislation and jettison the current DMA, but has made no attempt to do so, presumably because the DMA suits it very well.” It is what Luke Kemp, a research associate for the Study of Existential Risk at the University of Cambridge, described as the “stomp reflex”; a knee-jerk reaction from governments to clamp down on their citizens during times of disaster, playing on fears that the country will descend into chaos. These governments are then reluctant to let go of these emergency powers . Jeffrey says it is time that rule-making power be put back where it belongs and that this is with parliament. This article first appeared in the Daily Friend. – Linda van Tilburg

Time to stop the state of disaster and amend the DMA

Earlier this week, Dr Nkosasana Dlamini-Zuma, minister of cooperative government and traditional affairs and the designated minister under the Disaster Management Act (DMA) of 2002, extended the national state of disaster – first declared on 15th March 2020 – by yet another month: this time to 15th November 2021.

A state of disaster for 19 months already

The national state of disaster has already been in force for 19 months. In this time, natural and vaccine immunity are estimated to have spread to more than 80% of South Africans. Health professionals have become more expert in understanding and treating the disease. Business has become more experienced in protecting staff and customers. Some existing treatments have proved their value, while new treatments are closer to being approved. The Covid-19 death toll in the country is also now sharply down, as is the daily number of new infections.

Yet little has been done in the past 19 months to counter the situations in which the spread of infection is most likely: in packed commuter taxis, lengthy social grant queues, and crowded shack settlements where thousands live cheek-by-jowl.

People unable to avoid these super-spreader situations have been harmed, not helped, by the prolonged state of disaster and its lockdown rules. These rules have done little to reduce transmission risks for these individuals. They have, however, cost many of them their jobs or other means of livelihood.

A state of disaster is justified only when existing law is inadequate to deal with it. The government has now had 19 months to develop better legislation and jettison the current DMA. However, it has made no attempt to do so, presumably because the DMA suits it very well.

Emergency rules contrasted with DMA ones

The key problem with the DMA is its lack of safeguards. This is particularly evident when DMA provisions are compared with the rules governing a state of emergency, as set out in section 37 of the Constitution.

Under section 37, a state of emergency lapses automatically after 21 days unless Parliament resolves to extend it after public debate. The first extension needs only a simple majority, but every subsequent one requires 60% support. In addition, no extension can last for more than three months.

Guaranteed rights may be temporarily limited or suspended during a state of emergency, but generally only by means of legislation and hence with parliamentary approval. Certain rights, including the right to dignity, have special protection and may not be derogated from at all.

The DMA could not be more different. Under its terms, the designated minister (Dlamini-Zuma, in this instance) may declare a national state of emergency if existing laws are deemed inadequate or special circumstances so demand. No parliamentary approval is required.

Under the DMA, a state of disaster generally ends after three months. However, Dlamini-Zuma may instead extend it, for a month at a time, simply by notice in the Government Gazette. Again, no parliamentary approval is needed and monthly extensions can continue without limit.

Dlamini-Zuma’s strategy may now be to keep extending the state of disaster until a ‘zero-Covid’ target is reached. But that target is unlikely ever to be attained, even in highly vaccinated countries such as Israel and Singapore.

On this basis, the state of disaster could continue for many more months or even years. And the National Coronavirus Command Council (NCCC) – which seems to be calling the shots behind the scenes – will continue far into the future.

Ministerial regulation under the DMA

Under the DMA, the minister has the power to make regulations that are ‘necessary’ to protect people and property, provide relief, prevent disruption, or deal with the destructive effects of the disaster.

Regulations necessary for these purposes may deal with a range of issues. These include the release of state resources, the evacuation of people to temporary shelters, the ‘movement of people and goods…within the disaster-stricken area’, the suspension or limiting of alcohol sales (no mention is made of other sales), emergency procurement procedures, and post-disaster recovery. Regulations may also deal with ‘other steps that may be necessary…to contain and minimise the effects of the disaster’.

On this slender foundation, Dlamini-Zuma has imposed a lockdown of fluctuating severity for the past 19 months. She has assumed extraordinary powers to restrict or shut down business operations, keep people largely cooped up in their homes, impose nightly curfews, and limit both travel and social interaction.

According to the Supreme Court of Appeal (SCA) – in a January 2021 judgment dismissing a challenge by several UCT students to the validity of various disaster regulations – the minister has severely restricted freedom of movement, which is ‘a foundational right’. Moreover, by ‘confining everyone to their residences, albeit with exceptions and conditions’, she has ‘fundamentally restricted people’s autonomy and freedom of choice…and infringed the right of everyone to human dignity’

Dlamini-Zuma’s regulations have also severely limited what the SCA describes as ‘the right to practice one’s trade, profession or occupation, [which] is closely linked to the right to work – the right to earn a livelihood’. This right too has ‘a close and direct connection to human dignity’, as the SCA took pains to point out.

Under emergency rule, by contrast, restrictions on guaranteed rights must generally be introduced by legislation, rather than regulation. They must be approved by Parliament, in short – and via a process that is open and accountable.

Any restrictions on fundamental rights must be ‘strictly necessary’ to the combating of the emergency. And human dignity cannot be limited at all, as this is a right from which no derogation is permitted – not even when ‘the life of the nation’ is threatened and emergency measures are needed to ‘restore peace and order’.

No wonder the ANC alliance – with its long-standing commitment to a socialist national democratic revolution (NDR) aimed at giving the state ever more control over people and property – prefers the untrammelled powers provided by the DMA to the restrictions that govern emergency rule.

Court challenges to the DMA

Various court cases have been brought to challenge the constitutionality of the DMA and the regulations gazetted under it, but none has yet succeeded in any significant way.

The most pertinent challenge for present purposes is a case brought by the Freedom Front Plus (FF+) in May 2020. This case challenged the constitutionality of the DMA, saying it allowed the government to impose emergency-type restrictions on fundamental rights without having to comply with any of the constitutional safeguards laid down for emergency rule.

The Pretoria high court dismissed this argument, but its reasoning was poor. It claimed that emergency rule always ‘deviates from the constitutional order’ and ‘suspends’ (rather than limits) guaranteed rights, which is why parliamentary oversight is necessary.

By contrast, the court went on, a state of disaster does not permit any such deviation. In addition, any limits on rights imposed by ministerial regulation can be tested by the courts for compliance with the ‘justification’ criteria in section 36 of the Constitution. (Under section 36, rules which limit guaranteed rights must be ‘reasonable and justifiable’ in terms of various tests, failing which they are invalid.)

However, the court’s reasoning is fundamentally flawed. In practice, emergency restrictions may be far more limited than the judgment assumes. In addition, it is the DMA rules that have in fact been used to ‘deviate from the constitutional order’ for the past 19 months.

Under the DMA, extraordinarily far-reaching limits on fundamental rights have been imposed by ministerial regulation, without parliamentary approval or even proper legislative scrutiny. Effectively, the minister has usurped the law-making role of Parliament and infringed upon the separation of powers.

The court’s solution – that citizens can always challenge the minister’s regulations on a costly case-by-case basis – is entirely inadequate. Instead, the DMA should be amended to include the safeguards that apply to emergencies.

Limits on rights would then have to be adopted by legislation, rather than regulation. Any extension of the state of disaster would likewise require parliamentary endorsement, and by a special 60% majority.

The chance for change lies in our grasp

The opportunity to make these changes lies within our grasp. With vaccine and natural immunity now widespread and infection rates far lower, the state of disaster should be lifted rather than extended.

The DMA should then be amended – as the Freedom Front Plus has proposed in a private member’s bill now before Parliament – to introduce crucial safeguards echoing the emergency ones.

On this basis, parliamentary approval by 60% majority would be required for every three-month extension following the first one. And legislation approved by Parliament would be needed to limit guaranteed rights. (Alternatively, as the Freedom Front Plus proposes, the minister’s disaster regulations would have to be tabled in Parliament too and would fall away if disapproved by the legislature.)

Many additional reforms are needed as well to rescue the country from one-party dominance and breathe new life into the Constitution’s foundational values of ‘accountability, responsiveness, and openness’. But making the DMA subject to the safeguards that apply to emergencies would at least put the rule-making power back where it belongs – with Parliament – and be a step in the right direction.