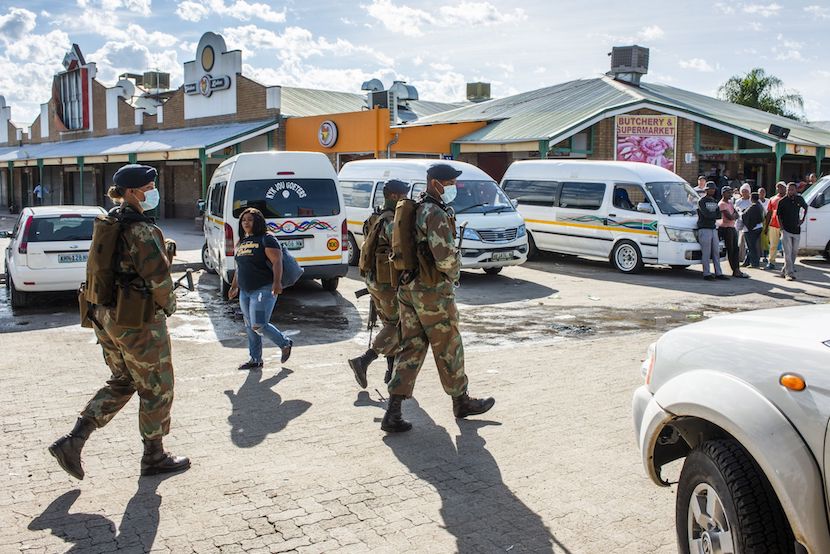 When Covid-19 finally leaves us, or we learn to live with it, the death toll and losing people close to us will be remembered. In South Africa, we will also remember the blunt instrument – the State of Disaster – the ANC government chose to control its citizens. The images of an Alexandra man beaten to death for drinking a beer in his garden will stay with us and the absurdity of a surfer chased by policemen on an empty beach. South Africa was an outlier in banning booze and tobacco sales; few other countries opted for these measures and it spurred a cigarette smuggling boom. The usual suspects benefited, and the alcohol industry and wine exporters faced a financial abyss. Ivo Vegter writes in the Daily Friend the silver lining to the draconian lockdowns is that most of the population turned against the ruling ANC but it left a legacy of distrust among the population against health interventions. He has added his voice to those of DA Leader John Steenhuisen, Western Cape Premier, Alan Winde and many business leaders to drop the power trip and argues the country should be freed to rebuild our economy, “and go dancing again”. – Linda van Tilburg

The State of Disaster must end

On Monday, South Africa marked the 666th day of the national State of Disaster. It was declared by Dr. Mmaphaka Tau, head of the National Disaster Management Centre in the Department of Cooperative Governance and Traditional Affairs, on 15 March 2020, in response to the spread of the SARS-CoV-2 virus. This virus causes Covid-19, a cluster of disease symptoms characterised by a severe form of pneumonia and blood clots.

This week Saturday, 15 January 2022, it will lapse, unless renewed by Minister Nkosazana-Dlamini Zuma, who seems to have automated her monthly Government Gazette notices to this effect. This time, she really should let it lapse.

According to her latest notice, the purpose of renewing the State of Disaster, nominally, is ‘to continue augmenting the existing legislation and contingency arrangements undertaken by organs of state to address the impact of the disaster’.

In practice, it is used to sustain a now very limited set of regulations, which for the most part mandate non-pharmaceutical interventions such as mask wearing, sanitising and social distancing, besides keeping nightclubs firmly closed.

These measures caused catastrophic damage to the economy, destroying thousands of businesses and millions of jobs.

Turning most of the population against the ruling ANC was arguably a silver lining to the draconian lockdowns, but that came at the cost of a deep distrust of government’s public health efforts.

This well-founded distrust left South Africans among the most rebellious populations even against sensible precautions such as masking, social distancing and vaccination.

It was clear more than a year ago that lockdowns do more harm than good. In fact, it was clear from the start that lockdowns would not be effective in South Africa, and would become an excuse for brutality and authoritarianism.

It is time to end the power trip, lift the State of Disaster, and disband the anti-democratic National Coronavirus Command Council.

The latest variant of the SARS-CoV-2 virus, Omicron, has been spreading very rapidly, accounting for higher case numbers than any of the previous waves, despite more limited testing at government facilities, and higher (albeit distressingly modest) vaccination numbers.

This is consistent with a virus that is becoming more transmissible and less virulent – both of which generally offer evolutionary advantages to viruses – and raises the hope that SARS-CoV-2 will soon become just another seasonal virus with a tolerably low mortality rate.

In a bizarre move, the Department of Health first ended its policy of contact tracing and close contact isolation, on the grounds that containment strategies are no longer appropriate and should be suspended in favour of mitigation policies, before reinstating it based on undisclosed ‘additional inputs and comments’, which, rumour has it, emanated from healthcare worker unions.

Knowing full-well that imposing new restrictions and maintaining a curfew over New Year’s Eve would lead to widespread civil disobedience, the government has also dropped most other restrictions on long-suffering South Africans.

Except for night clubs. Although up to 1 000 people may now gather indoors, and the regulations bizarrely do not require indoors venues to be ventilated, they definitely may not gather indoors in a nightclub, because then they’d be having fun, and nobody should be having fun on NDZ’s watch.

Normalising our response to the virus is long overdue. Treat the sick, protect the vulnerable, vaccinate widely, and take reasonable sanitary measures, but otherwise allow the economy and society to return to normal.

As I write this, the leader of the Democratic Alliance, John Steenhuisen, also called upon President Cyril Ramaphosa to lift the State of Disaster, and put his reasons well:

‘People need to know they can invest in businesses large or small without the rules of the game suddenly changing. Without investment, there will be no job creation and no sustainable poverty alleviation.

‘The National Coronavirus Command Council is profoundly undemocratic. There is great risk to our democracy in a small group of individuals taking decisions on all our behalf without parliamentary oversight and other democratic checks on power.

‘The State of Disaster has become no more than a cover for increasing centralized (sic) control and evading accountability. It must go.’

It is entirely feasible to maintain limited sanitation measures as regulations under public health legislation. The perfectly reasonable desire to keep people masked and distanced in high-risk indoor settings, however, is not sufficient to justify a continuation of the State of Disaster, nor for retaining autocratic control over the country through the National Coronavirus Command Council.

The ur-justification for imposing all these draconian restrictions upon the population was that the government needed time to prepare the healthcare system for the expected onslaught of coronavirus cases and deaths.

A few weeks to ‘flatten the curve’, remember? That justification never really held water, and now, more than 95 weeks later, the fourth wave placed hospitals are under no pressure at all.

End it. End the State of Disaster. Disband the National Coronavirus Command Council. Free us so we can rebuild our society and our economy, and go dancing again.