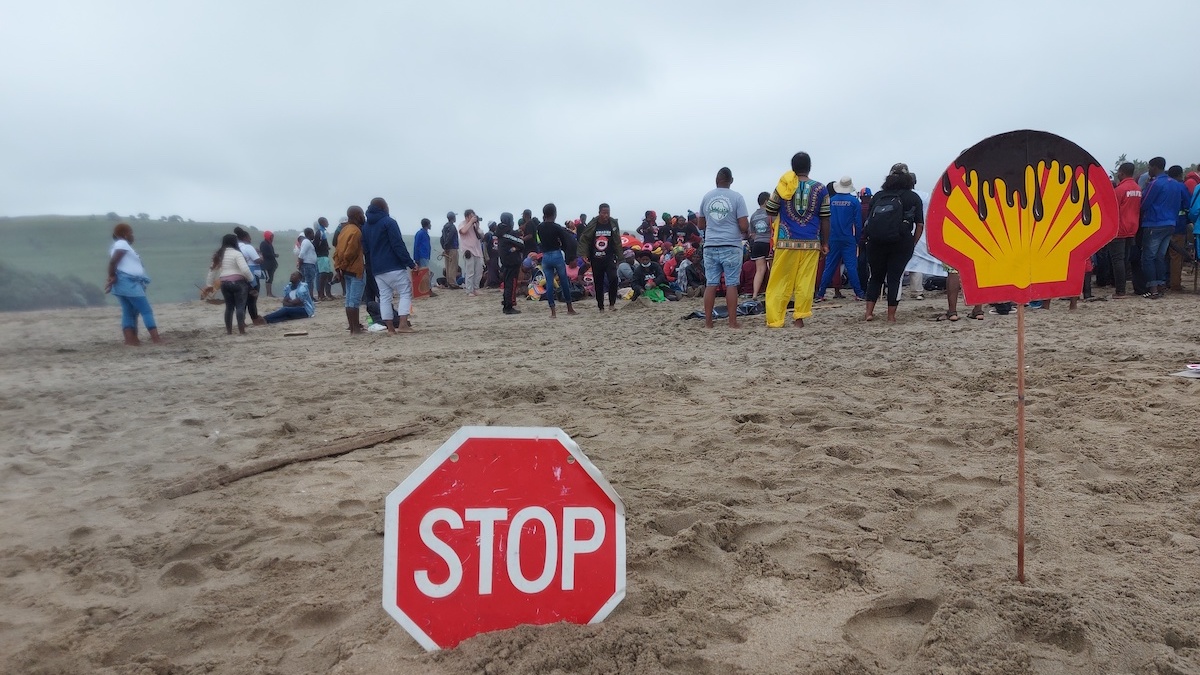 Back in court: Natural Justice and Greenpeace join challenge to Shell’s seismic search for oil and gas off the Wild Coast.

Come Monday, Shell’s offshore seismic survey in search of undersea oil and gas deposits off the Wild Coast will once again be up for debate in the Eastern Cape high court, this time before a full bench of three judges.

Yesterday (Thursday) the NGOs Natural Justice and Greenpeace Africa issued a press statement announcing that they have applied to join the court case brought on behalf of Wild Coast communities and small-scale fishers represented by the Legal Resources Centre (LRC) for the review of the offshore exploration right granted to Shell by the Department of Mineral Resources and Energy (DMRE) several years ago.

In December the high court in Grahamstown temporarily stopped Shell from continuing with its seismic survey of the ocean off the Wild Coast, pending the outcome of the case now to be heard.  (See previous BizNews report here)

The court is being asked to review and set aside the decision by the Department of Mineral Resources and Energy (DMRE) to grant Shell the exploration right in terms of which it was conducting a seismic survey. Both the joinder application by the two additional opposing NGOs, and the review will be heard by a full bench in Gqeberha at the Port Elizabeth High Court, over three days from Monday to Wednesday next week.

On 29 November 2021, Natural Justice and Greenpeace Africa, with two other applicants, represented by environmental law firm Cullinan & Associates, instituted proceedings in the Grahamstown court seeking an urgent interim interdict to stop the commencement of the seismic testing. Their application was unsuccessful. However, a few weeks later, another group of applicants succeeded in getting such an interdict, stopping Shell midstream in the so-called Sustaining the Wild Coast case. [see BizNews report]

Due to the similarities between the two court cases, Natural Justice and Greenpeace Africa filed an application in February 2022 requesting that their case for judicial review be joined with the application in the Sustaining the Wild Coast case. The government ministries and Shell raised no objections to the joinder application, but Shell’s partner in the project, Impact Africa, having now split legal representation from Shell, has objected to the joinder application.  The application as well as the judicial review of the DMRE’s initial decision to grant the exploration rights and its subsequent decisions renewing them (twice), will be presided over by Judges Mbenenge JP, Nhlangulela DJP and Norman J.

Amongst the issues to be argued:

# Both the Mineral and Petroleum Resources Development Act (MPRDA) and the National Environmental Management Act (NEMA) render Shell’s activities on the face of it unlawful.

# The Environmental Management Programme that Shell developed is outdated and contains significant information gaps, including the harm to the environment and the impact of the surveys on communities’ rights. The EMPr and audit do not contain any consideration of communities’ cultural, spiritual, or heritage associations to the ocean.

# The applicants argue that DMRE officials ignored the provisions of the National Environmental Management: Integrated Coastal Management Act (ICMA) when granting the exploration right. In terms of the ICMA, the ocean is considered public property that must be managed in the interests of the “whole community”, non-human species and future generations. The decision-makers also failed to consider the climate change impacts of exploring for, and then, exploiting oil and gas off the Wild Coast. (More about this below.)

Governments and scientists agree that keeping global warming to 1.5°C is only possible if there are “no new oil and gas fields approved for development”, according to the International Energy Agency.

“Oil and gas will lead to more emissions, and in the face of climate change, this is wholly irresponsible. We as Amadiba people unanimously oppose this oil exploration and destruction of our sacred land.” declared Sinegugu Zukulu of Sustaining the Wild Coast.

Shell and the Minister of Minerals and Energy argue that the DMRE was not required to notify anyone that they had granted the exploration right in 2014 notwithstanding the hundreds of ordinary South Africans who registered as Interested and Affected Parties (I&APs) during the 2013 consultation process.

In addition, one of the main arguments raised by the DMRE in opposing the application makes nonsense of the government’s international commitment to reducing carbon emissions in order to obviate the anticipated catastrophic  effects of climate change.

In the affidavit tendered by the Acting Director-General of the department, Patricia Betty Gumede, she argues that the contention that the applicants had no knowledge of […} the granting of the exploration right and never gained such knowledge over the past seven years – even if only buy word of mouth – is “highly improbable, given the fact that the core function of most of the institutions and environmental organizations cited is to monitor matters of this nature which might have an impact on the environment.”  It would therefore not be in the interest of justice “and certainty of administrative actions” to grant an extension of time for lodging an objection to the granting of the exploration right so long ago.

She explains further: “Since the Exploration Right was granted in 2014, a chain of further executive, policy and economic planning decisions were made by the Minister, based on the granting of the Exploration Right as a constant and a certainty. The aforesaid policy decisions were made with the high probability in mind, that mineral resources would be found, thereby creating jobs and strengthening the economy.

“The prospect of South Africa securing an important revenue-generating, strategic asset in the poverty-stricken Eastern Cape, once production of the oil and gas starts, will be completely defeated by the far-reaching relief which the Applicants seek.

“This will also defeat the economic planning and policies which have now been based on the development of the oil and gas which would likely be found.”