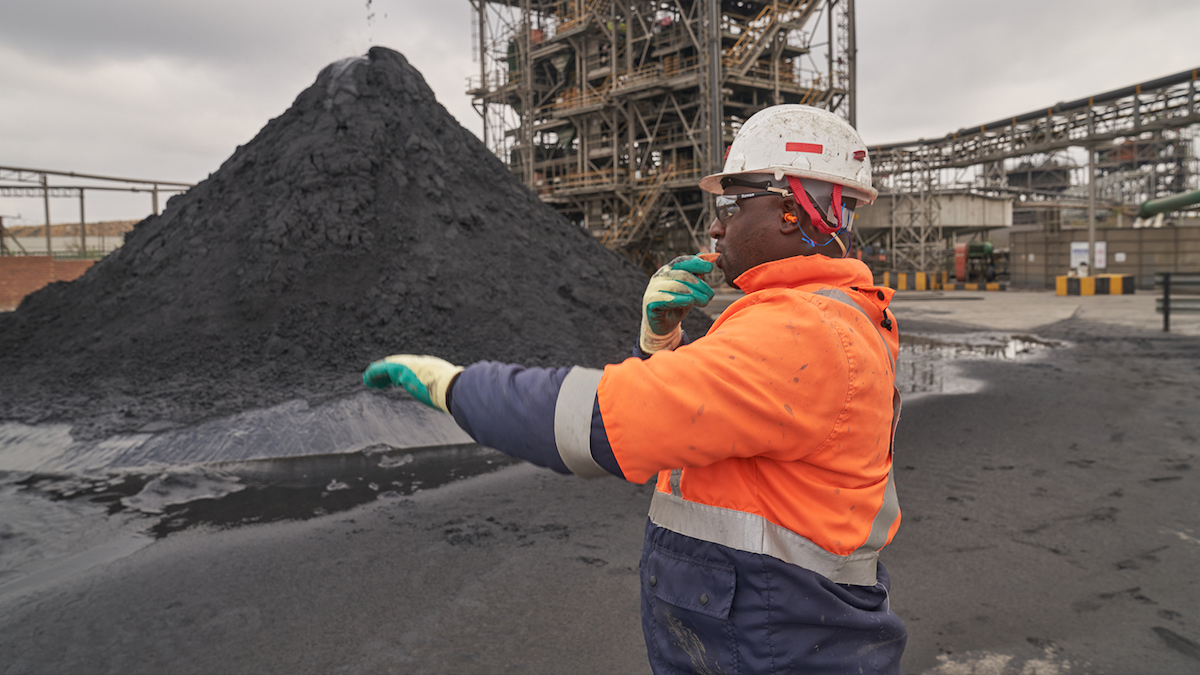 Merafe is a small cap, largely single-commodity, minority partner in a JSE-listed mining-and-beneficiating joint venture. In other words, a bit risky. But, to paraphrase slightly, ‘at the right price, even fortune favours the brave’. So, is R1.14 a share the “right” price?

It’s very difficult to say, and below I argue why. But before we dig in, the structure of the article: In Part 1, I introduce Merafe briefly, and in Part 2, I show why it’s the sort of company you only play with nicely – if at all. The short answer: because it’s affected by a world of different things, happening in different places, at different times, and in changing ways. The shorter answer. It’s complicated.

In Part 3, I take a closer look at Merafe – its revenue drivers, cost structure etc. And finally, in Part 4, I conclude with a back-of-the-envelope valuation and recommendation.

The Merafe-Glencore joint venture – Merafe holds a 20.5% stake – is the world’s largest producer of ferrochrome. Ferrochrome is an alloy of iron and chrome derived from chrome ore. When added to carbon steel in the right way, the result is stainless steel. And stainless steel – for a host of metallurgical reasons – is a central ingredient in the making of everything from submarines to spoons.

It’s also a kind of steel that in some incarnations is quite pretty (think Carol Boyes cutlery or car mags). What makes the Merafe-Glencore venture somewhat unique in the world of ferrochrome production is that it’s a vertically integrated operation – they mine their own chrome ore. The venture operates six chrome ore mines, five ferrochrome smelters, twenty-two ferrochrome furnaces, and five UG2 plants.

All in South Africa.

The company’s mining-production-sales cycle runs roughly as follows: First, chrome ore is extracted from the venture’s mining operations and delivered to its ferrochrome smelters. At the smelters, anthracite, coking coal, UG2 ore, and other chemicals are placed in furnaces and heated to a few thousand degrees. The smelted result is ferrochrome. The ferrochrome is then sent by road or rail toRichards Bay or Maputo from where it is shipped to clients – mostly in China. The chrome ore that isn’t sent to one of the smelters is sold to third parties.

In the joint venture arrangements, Glencore International is responsible for all product sales – for which it receives a sales and marketing fee – while Glencore Operations South Africa and Merafe oversee the operations.

Where China goes, stainless-steel follows. Where stainless-steel goes, ferrochrome follows. And where ferrochrome goes, Merafe is likely to follow. Why? Because, in almost every Merafe-relevant commodity, China is either the world’s largest producer, it’s most material consumer, or both. For example, China produces and consumes more than 55% and 40% of global stainless-steel production respectively. Nobody else comes close. In fact, nobody else has been coming close for years.

A roughly similar pattern plays out in ferrochrome: it’s all China – regularly producing and consuming about 40% and 60% of global ferrochrome production respectively. At least second-place South Africa is in the running here, typically producing about 25% of the global total. Take a bow, Merafe et al.

Finally, in chrome ore, the pattern is a bit different. Here, it’s once again all China on the demand side – 37% of the global total. But, on the production side, South Africa leads. The reason: it’s estimated that the world has 12 billion tons of chrome ore reserves. Of this, South Africa is thought to have 72%. Most of the rest is somewhere in Kazakhstan. Therefore, it shouldn’t be surprising that we typically supply about 80% of the Dragon’s chrome ore needs.

In short: if the prices of stainless steel, ferrochrome, and chrome ore are not exactly made in China, they are certainly stress-tested there. And this is what makes Merafe a tricky investment proposition: if butterflies in Brazil can cause hurricanes in Florida, imagine what a fickle billion-plus population could do to stainless steel, ferrochrome, and chrome ore prices. If history is any guide, quite a stir, it seems.

For example: In 2021, the Chinese Merchant ferrochrome price – which significantly influences the price Merafe receives for its ferrochrome – ranged between 80 and 140 US cents per pound. In other words, a bit breezy. The 5-year historical ranges – if not quite as snappy – exhibited the same sort of turbulence.

The annual average prices – as opposed to their ranges – paint a similar Jackson Pollock-esque picture. If the latter is anything to go by – and averages are more appropriate forecasting inputs – then we can expect the “Chinese” ferrochrome price to grow at about 2.5% per year. And then, all else equal, the price Merafe receives for its product – its CIF or cost, insurance, and freight price – should track higher at more or less the same pace.

Having said that, I strongly suspect that we won’t see the sort of ferrochrome pricing levels in the next 5 years that we witnessed during the most recent half-decade. For one, it’s not exactly all mooncake and sunshine in the Middle Kingdom at the moment. If there is a major – extended – correction in their property market.

The largest property market on earth by a long way – stainless steel demand is sure to take a big hit. And given that 90% of all ferrochrome production goes into the making of stainless-steel, Houston will shortly have a problem. If I’m right, I would be very careful in simply extrapolating what happened in the stainless-steel market in the last 5, 10, or even 20 years into the future.

What we ultimately want to end up with is a reasonable estimate of Merafe’s intrinsic value – the present value of its expected cash flows. But to get to those cash flows, we need to estimate its future revenues and costs. And to estimate those, we need to know what makes each go and where they are likely going. That is what I want to do next.

Merafe’s revenues are equal to the prices it receives for what it sells – ferrochrome and chrome ore – and how much of each it delivers. Let’s have a look at each.

Merafe sells most of its ferrochrome to Chinese clients – typically 70% or so. Most of the rest heads to Europe. This is important because the price Merafe charges for its product – what it calls the cost insurance, and freight price (CIF) – is usually slightly different in China and Europe. In China, Merafe’s CIF price is informed by the Chinese Merchant ferrochrome price, and in Europe, by something called the European ferrochrome benchmark price. And the prices of these “indices” arerarely the same – the “European” ferrochrome price is usually at a premium to its “Chinese” counterpart.

Thus far, I’ve focused almost exclusively on the ferrochrome-side of Merafes’s business – the bulk of their business. But they also sell raw chrome ore, which typically adds a not insignificant 15% to the company’s revenues annually. Importantly, chrome ore prices aren’t informed by particular benchmark prices, but rather result from general supply and demand conditions. But, like ferrochrome, there is a great deal of volatility in its pricing.

Merafe has little control over the revenue-side of their business – they have to sell what they can and take what they can get for it. On the cost side, it’s a lot different. Here they have many more levers to pull – but one word guides it all – efficiency. In Merafe’s case, this means digging, smelting, and shipping as much chrome ore and ferrochrome as cheaply as possible. Let’s see how well they’ve performed recently.

Recall that ferrochrome is made by adding chrome ore, coking coal, anthracite, and one or two other secrets to a big pot in just the right way, and then letting a nuclear power plant-level of electricity do the rest. Naturally, you have to have lots of people to feed and keep the situation going, and a building to house it all. The largest contributors to the cost of doing all this are the chrome ore and the power – 35% and 25% of total production costs respectively. The coking coal et al. add another 15%, while the people, the buildings, and the machinery round out the total with a collective 25%.

But these aren’t all the costs; shipping costs, marketing costs, and other odds and ends are excluded from the above. These “non-production” costs typically account for about 22% of Merafe’s tota operating costs. And it’s the total operating costs that we are particularly interested in, for they allow  us to track how well Merafe management is doing the things they can – more or less – control.

I say ‘more or less’ control since some costs are more “manageable” than others. Electricity is certainly one of the largest of these non-controllable costs, and if you’re Merafe management or a Merafe shareholder, presumably one of your more material worries at the moment. Moreover, I don’t see relief coming to a smelter near you anytime soon, for apparently Eskom is asking for another 30- odd percent tariff increase in 2023. At this rate, Merafe will soon be priced out of the market. One route, which the company has alluded to, is to go renewable and off-grid. The only problem is that Merafe uses so much electricity that they’d probably need a solar plant the size of the Free State to satisfy their energy needs, or enough wind turbines to turn the earth on its axis.

But, despite the 10 plaques of Eskom, Merafe’s management is doing a pretty good job in managing the cost-side of the business. The most recent 5-year numbers – including significant Eskom tariff increases – show that production costs have increased by about 6.5% per year on average. That’s very commendable.

Part 4: What is Merafe worth?

I won’t bore you with all the relevant calculations, but I will list my input assumptions and briefly explain why I think they should prove user friendly.

Revenues, Costs, and the Discount Rate

I don’t expect the quantity of goods Merafe produces to increase significantly, if at all. The reason: Their production numbers haven’t increased for years, and there is no indication that they plan to build new mines or smelters. Hence, my 5-year base-case ferrochrome and chrome ore production assumption is 377,000 tons and 330, 000 tons respectively.

Moreover, I don’t think ferrochrome and chrome ore prices are likely to increase in the next 5 years. In fact, I expect the average price of ferrochrome and chrome ore to retreat significantly in the coming half-decade. The reason: The Chinese property market is sneezing. 70% of Chinese household wealth is in property. Any market where consumer confidence plays a significant demand-pull role could catch a cold. Stainless steel is a central ingredient in many of these kinds of markets – white goods, cars, etc. And, as I explained, where stainless steel goes, ferrochrome follows, and where ferrochrome goes…For my base-case scenario, I assume the Merafe CIF price will average $994 per ton (at R17/$).

With respect to costs, my central worry turns on Eskom – the parastatals’ electricity supply – if there is any – is getting prohibitively expensive. I should also be worried about Transnet, but, as the Lord said, ‘Each day has enough troubles of its own’.

If you do a few excel things with the assumptions, Merafe’s intrinsic value comes to R1.12 per share, – just shy of the current R1.14 (21 September 2022). However, and this is a big however, if you get the Merafe-relevant future wrong by 5% (on average), the intrinsic value drops to R0,60 a share. In other words, don’t be wrong on the wrong side here. And, because I think it’s very easy to do so, I strongly suggest only playing the Merafe-game with money you can afford to lose.