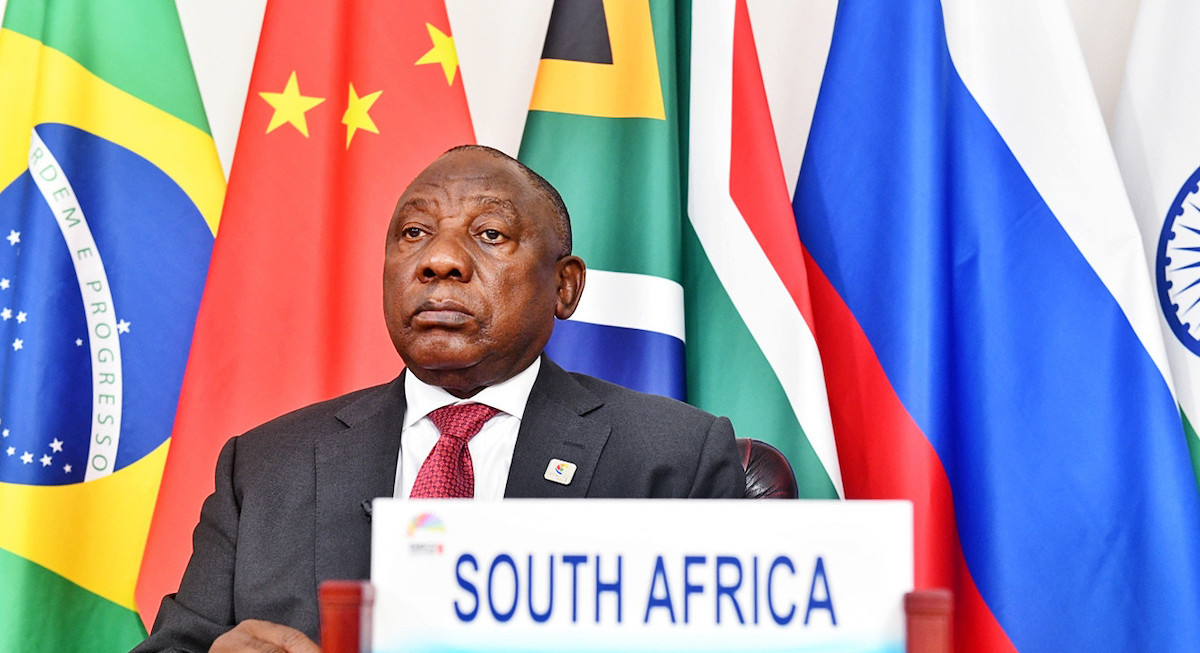 Hot on the heels of the recent BRICS summit, we gather top experts to unpack South Africa’s membership of BRICS with a keen focus on economic opportunities for our own development as well as the rest of the African continent. Busi Mabuza, chairperson of the South Africa chapter of the BRICS Business Council, Ziaad Suleman, chair of the South Africa BRICS Business Council Digital Economy Work Group, and Leslie Maasdorp, vice-president and Chief Financial Officer of the New Development Bank, share exclusive insights into how best to leverage SA’s position in BRICS.

It’s an exciting landscape, right? And I think the remarks are really, really apt because the opportunity but also the ability to play on the same playing field is immense for us. Not only do we have opportunities in South Africa, but we also have opportunities to leverage global markets. And with the world of the Internet, with the world of 4IR emerging in towards 5IR and all of those types of things, the world has really become one. So when you take the landscape of South Africa, you look at the last ten years and the advocacy that we’ve had from a technology revolution perspective, and the advocacy of where we are going, it’s really remarkable from the perspective of South Africa. You know, our discussions with our BRICS nations have been really, really beneficial.  We have the same types of challenges, some of them on different scales, but ultimately we all grapple with some of the issues.  How do you get greater efficiency? How do you automate better? How do you get better digital skills? How do you expect value from each other’s economies? How do we make sure we cut out the duplication? All of these are facets that technology can certainly assist with. You know, when we speak about 60% of the population of Africa being under the age of 25, it sheds light on our responsibilities as leaders to get all that 60% promise into the future. And if you think about the scale and the responsibility, that can certainly be achieved through digitization. So the world of cloud or digital education or scaling through the use of all of these types of things are really remarkable opportunities for us.

So starting with the energy conversation is very important, not just important for us at the moment. There’s a different kind of crisis in Russia with their stranded resources that they’re trying to get out into the world. There’s a different kind of energy crisis in Europe, who had built their infrastructure to rely on supply of the input resource from Russia. And all of the turmoil that we’re seeing in the world is changing, thinking around how we look at energy solutions. In the BRICS Business Council, we have an Energy and Green Economy working group and I think it’s apt that it is titled Energy and Green Economy, because these have to work hand-in-glove as we look at energy solutions. We need to make sure we’re mindful of the impact on the environment, but in a manner that is just for all nations, not to penalise nations that are energy starved because we are chasing the green economy at all cost. So the energy future, very important for me; a very important factor was food security because of the shocks that we saw, with the supply chains closing and products being hugely available for many nations. But we’re used to importing our products being standardised on its way to destinations. The food security declaration was a very, very important declaration and outcome from the BRICS summit. There is currently engagement on a BRICS industrialisation initiative, but engagement is still at government level. But because industry talks to business, we have already flexed that as the BRICS Business Council. We would like to have a voice in those engagements that we have seen. Our biggest excitement as South Africa Inc is that one of our young entrepreneurs was spotted actually working in the digital space – Obakeng Motloko, who together with his partners, developed a digital platform that they are rolling out in South Africa to the taxi industry. But they’ve done research. These youngsters caught the attention of China and had it not been for the lockdown that is so stringent in China at the moment, they would have travelled to China to go and exhibit their product. So there are innovations coming out of South Africa that are catching the attention of our BRIC partners.

So the New Development Bank has just set itself a target. We’ve just had the board of governors, the five ministers of finance of the BRICS countries meet, as you know, and they endorse the bank’s new five-year strategy. 40% of the bank’s funding will be towards climate mitigation and climate adaptation, which means that our funding will be in the green economy, almost half of the bank’s exposure from this year forward. it’s impossible for us to finance coal fired power stations and therefore ensure that as we make this transition towards the green economy. What the just transition means is that we are able to train and retain workers. Look at the development of alternative industries now. Very exciting developments. As you know, the green hydrogen industry is a new sort of sector that is developing rapidly.

South Africa needs right now – today – a new industrial strategy around the green economy. And the just transition is one part. Let’s take Mpumalanga. South Africa has, as you know, about 15 power stations, more than 85% of them using coal. The lifespan of most of these power stations is just around 40, 42 years, which means that the crisis will be very acute in the next decade when these power stations reach the end of their useful economic lifespan. We have no choice but to develop the green economy. There are roughly about 20,000 workers employed in Mpumalanga alone in these industries in the coal mines and coal fired power stations. In the next 15, 20 years, Mpumalanga cannot continue to rely on the coal industry, we need to develop alternate industries and therefore I think developing detailed strategies for the micro granular level of each town is vital. How are we going to resuscitate these smaller municipalities and towns in Mpumalanga in particular, where most of our power stations are located? In short, we are blessed with an abundance of solar energy, wind power. We need to invest in the grid and most importantly, remove all the remaining obstacles so we can have more private generation. The solution to our energy crisis, as we all know, does not lie in Megawatt Park or even in Pretoria at the Union Buildings or in Minister Pravin Gordhan’s office. Eskom needs to become a more efficient enterprise but we have to enable new generation, strengthen the transmission grid and strengthen the municipalities when it comes to distribution. In short, it is essential to develop detailed plans around a just transition, creating new economic opportunities, because those opportunities will flow from the more innovative, clean economy that is ahead of us.

Look, it’s an absolute fundamental right. It’s like fuel to a motor vehicle. It’s exactly the same thing. Without the fuel, you can’t move. So the reality is, we’re all reliant on energy. We all understand the challenges. But really, we all have to put our minds together in order to solve the crisis. And I think with the support of the new development bank and other partners, we can certainly get through it. What we do need as leaders is to be optimistic. Switching that attention back into the digital economy, it’s absolutely fundamental because without the electricity, you can’t even get your computer to last for more than maybe two, three, 4 hours, slightly lowering the connectivity. So in order to have a productive society, electricity and energy is fundamental. However, within the constraints of what we have, we also have digital solutions that do support when we don’t have energy. So, for example, how do we become far more effective around solar? How do we use backup in order to carry us through the portions of the day where we don’t have electricity? So when you think of a solution, we have to think much more broadly, from a digital economy perspective. It’s really about finding solutions, using technology to enable business in society. And these are some of the examples that do carry us through. It doesn’t totally erode the fact that energy is fundamental, but there are ways that technology can support these types of problems.

Busi Mabuza on whether there’s light at the end of the tunnel as a result of connectivity in the BRICS environment despite the growing inflation rate, global food crises, etc

We need to learn lessons from our own mistakes and take them on board as we pivot for the opportunity that is staring us in the face. There is an opportunity to make sure that this continent has the energy and electricity it needs. There is money available in the world. We know that for a fact. Even entities that were considered by some ratings agencies as somewhat marginal were able to raise funding from the new development bank. The opportunity is here and we need to make sure that we take advantage of it. Our conversation with the small and medium enterprises is that they must avail themselves to attend as many of the BRICS Business Council sessions as possible and network, and we will assist them to unlock the opportunity that is there.

I think that we can only be the architects and engineers of our own destiny. As South African international funders, we can mobilise from capital markets and support from developed nations for the stimulation, for example, of new industries like green hydrogen. That can only be complementary. We know what needs to be done in South Africa. There are some short term things that need to be done to ensure that we can relieve our economy of the current constraints. Because the lack of economic growth is at the centre of our problems in South Africa. For the last decade, we haven’t grown. We are hovering around 1% and will continue to hover there unless we solve the energy problem. But what the crisis has done is put it front and centre of every single policy-maker. I believe that the commitment is there. What is required now, though, is execution. As I mentioned, I believe we need greater involvement by the private, independent power producers, the private sector, and to remove bureaucratic hurdles. I agree fully with Busi but at the same time we need to stimulate local industry. Let’s find ways to build an entire industrial strategy around the production of solar panels so that as our solar industry continues to develop and become world class, and that we’re able to create jobs in the process as well.