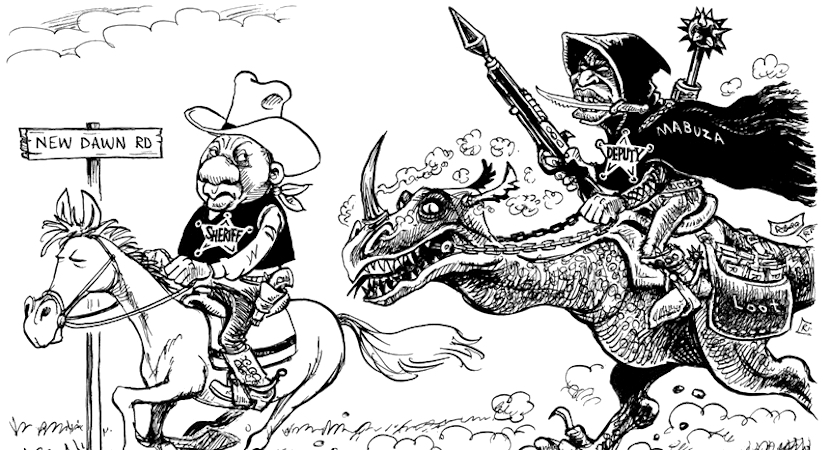 CAPE TOWN — An old Africa-hand, Executive Director of the Desmond Tutu Centre for Leadership, Chuck Stephens reveals a few things that happened under Deputy President David Mabuza’s watch while Mabuza was Mpumalanga Premier and Stephens was running a prominent NGO there. A few things not many know about and many more would be unsurprised by, even though the inferences are quite startling. Using his personal experience of how the Mpumalanga political cabal worked when it came to tenders, never mind the-unsolved murders of 14 whistleblowers there between 1998 and 2011 – all killed in January, he broadens the brush strokes to reveal a picture of a party bent on self-preservation at all costs. Literally looking the other way when it comes to murder, corruption and mafia-style malfeasance. It’s a new overlay on the hard-core evidence now emerging from the Nugent and Zondo Commissions. The parallel mafioso state that Stephens talks about may have lost its head honcho and a few key lieutenants, but more than enough Zuptoids are in place to keep President Ramaphosa’s horns in political place. – Chris Bateman

I moved to Mpumalanga province in December 1994, after the first free and fair elections in South Africa were held. I had previously lived in Zimbabwe, Angola, Uganda and Congo, for a total of 18 years. I have now lived in South Africa for another 24 years. That totals 42 years, so I know Africa well.

Less than 20 years after he immigrated to South Africa from Greece, George Bizos emerged on the legal team of the Treason Trialists. So I count my two decades as time enough to be able to speak up.

We have recently seen another President being squeezed out of high office. Names that follow his departure include Supra Mahumapelo, Berning Ntlemeza, and Shaun Abrahams. These cadres are evidence of the maladministration that allowed for patronage appointments to high office, and the practice of what the old African proverb says: “A goat eats where it is tethered.”

Two commissions are currently exploring the malfeasance in more details that even the parliamentary oversight committees. Zondo and Nugent. It is still early days, but we are hearing witnesses describe in full public view now, how a “parallel government” ran this country. Wealthy men offered sacks of money to bribe cadres to take over ministerial posts. In return for favours, of course. Those who declined were threatened with death lest they blew the whistle.

There was a Cabinet, but there was also a Cabal. Some ministers and family members and intimate friends of the president were in both, but most operated in one circle or the other. The Cabal tried its best to widen its influence over the government. Stealth was used, gathering intelligence illegally in Stalinesque fashion – to blackmail people. With impunity. The wider the influence, the easier it got to loot and plunder. But sometimes it was in full view, like landing an airplane of wedding guests from India at a military base, and funding the wedding with money siphoned off a pro-poor dairy farm project.

Witnesses are saying that morale in SARS sank and that fear came to prevail. Some people call this a Gangster State, and it is hard to argue with them in the light of evidence piling up daily in the two commissions together with the parliamentary oversight committees.

In spite of this new climate of transparency, in Mpumalanga province, the report on the 17 “January Murders” has never been released. Seventeen whistle-blowers were shot between 1998 and 2011; only three survived. Always in January. The media and civil society raised a ruckus about it, including our NGO, so a team of special investigators was finally sent in to get to the bottom of it. Their report is still unavailable to the public, including to the families of those who were gunned down.

David Mabuza was the provincial premier for much of this period. He claims innocence, but that is hard to fathom. Certainly the families of the murdered whistle-blowers don’t believe it, they remain bitter.

As an NGO Director in the province, I have experienced first-hand the way this Sopranos-style system works. (Commonly called a protection racket.) In the cross-over between government and gangsters, some of the thugs are policemen, prosecutors and immigration officials.

Our NGO was appointed as Provincial Implementing Agency of the Community Work Programme in early 2012. There had been a tender bid, and we scored higher than any other bidder. But we had accepted an invitation into a Joint Venture with another NGO… that turned out to be “in the Cabal”. And the CWP turned out to be just another cash-cow that could be milked by malfeasance.

No matter how much we howled to the provincial Cabinet and to COGTA, we were ignored and sidelined. Employment contracts were cancelled illegally. Wages were not paid for months of work performed. Our staff was poached shamelessly by the NGO that went on to mount a hostile take-over bid of the tender. As Themba Maseko pointed out to the Zondo Commission this week, people fear reprisal and losing their job. So they prefer to suffer in silence. While Rome burns.

The HOD of COGTA province at this time was suddenly promoted two years later to become the Minister of State Security. He was a sycophant if there ever was one. Parliament is still trying to reign in on the illegal activities used by the SSA to gather intelligence on private citizens. This Minister cut his teeth on how to do that in Mpumalanga, where our offices were broken into repeatedly in what were clearly data-robberies. When they cherry-pick your two bulky Finance desktops, and leave 12 training laptops behind, you know what they came for. We can safely assume that our phones and emails are wire-tapped, etc.

He repeatedly referred to “dangerous NGOs” when being questioned by Parliament about such activities.

Then the president sacked his Finance Minister who was refusing to sign off on the ill-conceived Nuclear deal. But he had to back-track. So he moved the sycophant new Finance Minister to COGTA, and soon moved his Minister of State Security over to the Energy portfolio, to try to finesse the Nuclear project through anyway. But it didn’t work, and the president and the sycophants all lost their jobs.

Meanwhile David Mabuza is trying to argue in the New York Times that he is really Mr Clean. What about the Cradle of Civilization debacle? What about the plundering of the SAFCOL Forests – reported by The Lowvelder? What about the dossier that arrived on Mathews Phosa’s doorstep, which he then reported (privately) to Luthuli House? Only to be sued – unsuccessfully – by Mabuza for R10 million.

And what about the phenomenal number of delegates that Mpumalanga sent to NASREC, upsetting the equilibrium? Were all those delegates authentic? When I watch the weather forecast every night, province by province, I notice that Mpumalanga is a relatively small province. So how does it end up with more delegates at a national conference than any other province? This logic still has to be tested.

My response to David Mabuza is that Al Capone could not argue convincingly that Chicago had more skyscrapers than any other city, and more food banks, so that anyone who complained that it was dangerous and frightening was obviously misled. Both can be true. The province’s record of development is mixed. For example, year after year the Auditor General has objected to provincial government’s wasteful expenditure and the level of funds unaccounted for. Whether those funds went to pay assassins is aside from the point. It is up to a Premier to see that such leaks are plugged.

Instead, the ANC has led the country to the brink. Unemployment rates are terribly high all across the country, but highest of all in Mpumalanga.

And as for invoking Nelson Mandela’s name – don’t forget how bitter Madiba became after visiting the ANC’s National Executive Committee (after his retirement) to plead that the detrimental AIDS policy should be reversed. That is, to roll out ARVs according to best practice. Only to be humiliated by a verbal attack from then-president Thabo Mbeki, for trying to peddle world opinion on South Africans who were at the eye of the storm, in terms of the global epidemic. That was the best-ever example of the ANC’s propensity to group-think.

World opinion prevailed, and a Harvard University study has concluded since that around 350 000 citizens died who did not need to. Because of detrimental policy, not guns. Before their time. Leaving a deluge of orphans behind. That kind of arrogance eventually catches up on you, and Mandela did right to never again to return an NEC meeting. His personal boycott has not gone un-noticed.

Mr Mabuza’s province consistently operated during his tenure in a climate of fear, with a Cabal-driven reign of terror that kept people in silence. If they were not gunned down, there were reprisals, they lost their jobs, or they were run out of town by xenophobic threats and slander. There was undeniably a “shadow state” operating in the province, as in the country. For example, while he was premier, I wrote to David Mabuza four times to relate to him how someone working in his office at Riverside was abusing his power, trying to intimidate our NGO. I never got the courtesy of a reply. So I went to the Judiciary for help, and found it. And now our NGO has reported a long litany of malpractice to both the Zondo Commission and also to Pravin Gordhan’s Project Re-capture database. Déjà vu, but whistle-blowing is a virtue.