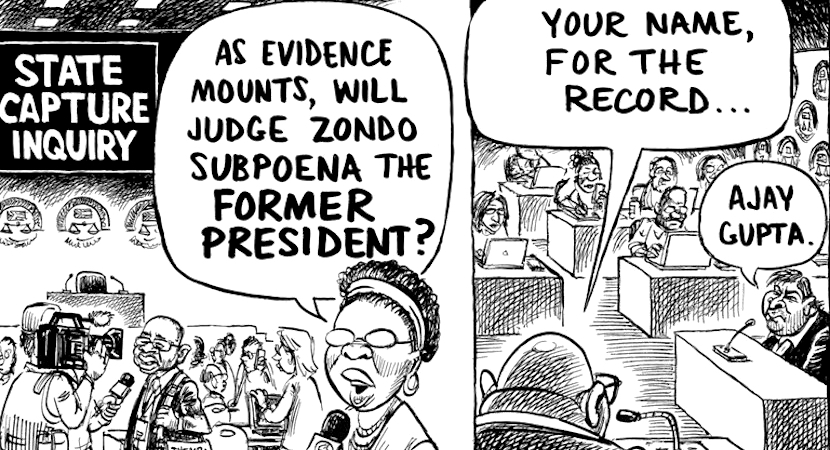 CAPE TOWN — If you’ve been too busy putting hard-won bread on your table to keep up with what’s happening at the State Capture Commission, relax – here it is in healthy bite-sized chunks. There’s probably a book on the political psychology of South Africa’s populace to explain how we managed to elect and re-elect a president whom a judge publicly labelled over 13 years ago as being in a “generally corrupt” relationship with his so-called financial adviser and ultimate fall-guy Schabir Shaik. For a measly R500,000 per year Shaik allegedly bribed Zuma to use his cabinet influence to lobby in favour of arms suppliers Thomson CSF. Shaik went to jail for it and now, 13 years later, Zuma has exhausted his side-steps, dummies and power plays and is facing the same music. But back to the Zondo Commission; the brazenness, depth and width of the corruption during the Zuma years makes the arms deal look like a kid’s tea party. The words of Mandela on the steps of Cape Town’s City Hall on the day he was released echo loudly in our new context; “Never again…”. Except that nobody of similar stature and leadership ability is saying them. – Chris Bateman

(Bloomberg) – For the past eight years, South Africa was heading down the road to being run as a criminal enterprise.

That’s the picture emerging from a judicial commission of inquiry into the alleged theft of public funds during former President Jacob Zuma’s tenure – a practice locally known as state capture. The first witnesses have implicated members of the Gupta family, who are Zuma’s friends and were in business with one of his sons, in plundering billions of rands from South Africa’s coffers with the tacit assent of the president and law-enforcement agencies.

While much of the information was already public, the testimony has highlighted how widespread the looting was and how deeply compromised state institutions became. Former Finance Minister Pravin Gordhan, who now looks after state companies, previously estimated that more than R100 billion ($6.7 billion) may have been stolen.

“What has emerged so far gives an indication of the brazenness with which Jacob Zuma betrayed his constitutional duties for petty personal interests,” said Mpumelelo Mkhabela, a political analyst at the Pretoria-based University of South Africa’s Department of Political Sciences. “We also got the indication that more is still to come. It provides confirmation of what many people expected.”

The ruling African National Congress forced Zuma, 76, to step down as president in February and replaced him with new party leader Cyril Ramaphosa, 65. Zuma and the three Gupta brothers, who have left the country, have denied wrongdoing. Their lawyers have yet to cross-examine witnesses, and it’s unclear whether they will testify.

Here’s some of what the inquiry, led by Deputy Chief Justice Raymond Zondo, has revealed so far:

The commission expects to take two years to complete its work. Future testimony will focus on looting from power utility Eskom Holdings SOC Ltd. and other state companies, as well as how law-enforcement agencies were compromised. Public hearings are due to resume on Sept. 6, when a senior treasury official is scheduled to testify.

While the commission doesn’t have the power to prosecute anyone, it can recommend that law-enforcement agencies take action against those implicated in wrongdoing. Bart Henderson, the chief executive officer of the Africa Institute of Corporate Fraud Management, isn’t optimistic all those responsible for the plunder will face justice.

“The National Prosecuting Authority, in particular in the pursuit of illicit funds, has not exactly covered itself in glory,” Henderson said. “When it comes to getting stolen money back, I wouldn’t hold my breath.”