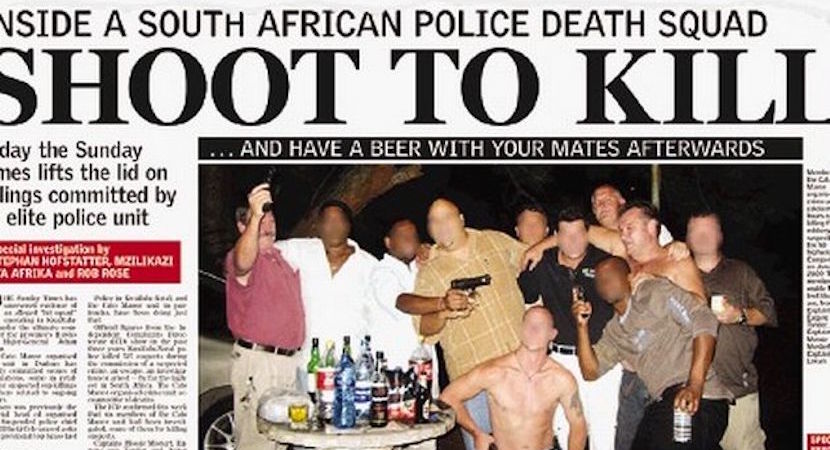 CAPE TOWN — When the ventilators ventilate one another, that elusive Holy Grail – i.e.  the actual truth – has a greater chance of blowing in. Or at least, a clearer, though often more complex picture can emerge. Here Ed Herbst, a veteran who lived through much of the now-contested fake news stories that have shaken the Sunday Times to its core, parts the curtains to revel a wider, more intricate picture than much of the reportage has done until now. He questions how the Sunday Times Cato Manor Death Squad article managed such a long, seemingly credible shelf-life – with, as he eloquently puts it, “more holes (in it) than a hundred metres of chicken wire.” Then he pits two of South Africa’s most influential journalists against one another, painting erstwhile Sunday Times Editor Ray Hartley as obdurate in taking concerned feedback from Martin Welz, lawyer and veteran editor of the investigative magazine, Noseweek. Former Sunday Times virtual front-page story resident author, Mzilikazi wa Afrika, emerges with the most ethical questions buzzing about him. It’s a bun-fight of note – one that only testimony from the media protagonists at the Zondo or Nugent Commissions might resolve. Bring on Jim Morrison’s autobiography; “Nobody gets out of here alive!” – Chris Bateman

Within weeks Noseweek had pointed out various glaringly obvious errors in the Sunday Times article and questioned the motives of its sources. – No Police ‘death squad’ noseweek 1/3/2014

On Sunday, October 21, Adriaan Basson the editor of the News 24 website took a decision to publish an article by former Sunday Times editor, Ray Hartley in defence of tenure as editor during which time the contentious ‘Cato Manor Death Squad’ articles were published.

Hartley wrote this article after the current editor of the Sunday Times, Bongani Siqoko recently apologised for a second time for these articles and the damaging falsehoods they contained.

I have long admired Hartley’s journalism and his book The Big Fix: How South Africa Stole the 2010 World Cup.

I was also aware though, that Noseweek had, over a period of three years, published several articles pointing out, as General Johan Booysen himself subsequently did, that these articles had more holes than a hundred metres of chicken wire.

I accordingly put together a timeline of these articles – see below.

I also contacted the editor of Noseweek, Martin Welz.

He told me that he had employed Mzilikazi wa Afrika after wa Afrika had left the Sunday Times under a cloud in 2004.

He quickly came to the conclusion however that wa Afrika’s reporting was ethically suspect and terminated his association with him.

Subsequently, after the Sunday Times had re-employed wa Afrika and when the ‘Cato Manor Death Squad’ articles started appearing, Welz approached Hartley at the annual Franschhoek Literary Festival which both were attending.

In his discussion with Hartley, he voiced his misgivings about the ethical probity of wa Afrika’s reporting.

“He refused to hear me out and insisted I make an appointment with his secretary for a telephone discussion the following week. I did so.   After hearing my story, that he told me he did not need my advice”, Welz said.

Hartley will recall that when Noseweek started raising concerns about the validity of the ‘Cato Manor Hit Squad’ articles, the Sunday Times fought back and questioned the motives of Welz and his team in publishing the articles listed below:

‘Since the publication of Siqoko’s article, my 30-year reputation as an ethical, fair and accurate journalist and editor has been severely damaged. I am greeted in the street with looks of pity and sometimes of anger’.

His arrogance takes one’s breath away.

What about the lives of the falsely accused policemen – and their families – who were arrested in their homes and appeared in court again and again with attendant media coverage over a period of years.

Hartley whines about his hurt feelings but what does he have to say about the following passage on page 117 in Jessica Pitchford’s book Blood on their Hands?

At dawn, the homes of 18 Cato Manor ofﬁcers and two officers with the National Intervention Unit (NIU) were raided. Eva’s wife and their two children were woken to pounding on the door. She told reporters: ‘They turned our house upside down. They removed paintings from the wall, stripped the beds, turned over couches and even went through the rubbish

When they got calls from their distraught families, the men went back home. Van der Merwe’s phone didn’t stop: he tried to get to as many of the officers’ homes as possible while the raids were underway. He phoned a dozen attorneys he knew and got them to assist individual members with the search procedure. Equipment used in the execution of their duties was being seized: computers, cellphones, cameras, ﬁrearms, blue lights and crime-scene tapes.

To this day, seven years after the Sunday Times front page banner headline ‘Inside a South African Police Death Squad  on 11 December 2011, Johan Booysen still faces racketeering charges and the suspensions of 29 policemen who had been falsely accused in the Sunday Times reports were only lifted in May last year.

Their careers and their lives had been in limbo for four years – and Hartley whines about his hurt feelings.

Hartley rightly points out that he was no longer editor of the Sunday Times when it started publishing a series of front page leads about the SARS ‘Rogue Unit’ which included the bizarre claim that it was running a brothel – something that I questioned at the time and subsequently.

Pearlie Joubert, a single mother of two children went much further. She resigned from the Sunday Times and wrote to the then minister of finance and Judge Frank Kroon.

Hartley, all the while, maintained a complicit silence and never, at the time, publicly distanced himself from the SARS ‘Rogue Unit’ articles.

If Hartley feels a need to further exculpate himself, all he has to do is follow the advice of Jacques Pauw and testify before the Zondo and Nugent commissions.

In retrospect it is tragic that Hartley, in his hauteur and his hubris, chose to be so dismissive of the well-meant advice of Martin Welz, one of the country’s most experienced investigative journalists.