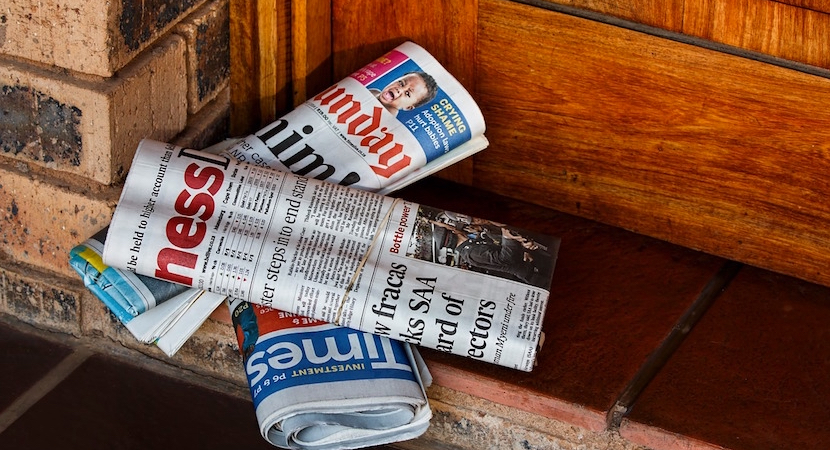 JOHANNESBURG — The fallout regarding the Sunday Times’ now-fake SARS ‘rogue unit’ stories continues as the former Business Day editor, Songezo Zibi, took to Twitter on the weekend to describe how he questioned his sister paper’s articles on the subject. But Zibi isn’t the only former journalist from that organisation to ask questions about the Sunday Times’ now-infamous reporting. As Ed Herbst points out below, Pearlie Joubert – after resigning from the Sunday Times in 2015 – wrote a letter expressing her concerns about this situation to Judge Kroon, the then Minister of Finance, Nhlanhla Nene and his deputy, Mcebisi Jonas. Unfortunately, the letter fell on deaf ears. – Gareth van Zyl

‘The investigations unit at the Sunday Times played a crucial role in the destruction of the Hawks and SARS – and its members need to come forward and explain their roles in arguably the worst journalism that has ever been perpetrated in this country. – Jacques Pauw Why the Sunday Times should go to the Zondo and Nugent Commissions Daily Maverick 29/9/2018

Jacques Pauw has called on the Sunday Times investigative unit – which did so much harm to SARS and the Hawks and which so diminished public trust in local newspapers – to testify before the Zondo and Nugent Commissions of Inquiry.

Pearlie Joubert was a member of that team until, as a working mother and with no other employment in prospect, she walked away from the Sunday Times in 2015 because she felt the need to distance herself personally and professionally from its Fake News allegations about a ‘Rogue Unit’ operating at the South African Revenue Service.

She joined Vrye Weekblad as a student intern in 1989 and Jacques Pauw calls her ‘one of the bravest journalists I know’.

She says that Mastenbroek, who happened to be the ex-husband of the then Sunday Times editor, Phylicia Oppelt, sought to persuade her to publish articles detrimental to the professional reputations of his former colleagues Ivan Pillay, Johann van Loggerenberg and Adrian Lackay.

She says she communicated her concerns to Oppelt and thereafter her life at the newspaper became untenable.

She was ostracised by Oppelt and criticised by members of the investigative team including Stephan Hofstatter, Piet Rampedi and Mzilikazi wa Afrika. The national news diary of the newspaper, issued weekly, was withheld from her and she was excluded from the annual strategic bosberaad of the senior Sunday Times journalists.

After resigning from the Sunday Times, Joubert wrote this letter in June 2015 expressing her concerns about this situation and addressed it to Judge Kroon, the then Minister of Finance, Nhlanhla Nene and his deputy, Mcebisi Jonas.

She was then publicly attacked by the Sunday Times and by Oppelt.

Joubert was vindicated however by an excoriating Press Council finding against the Sunday Times.

In May 2015 I became uneasy about the countervailing front page leads being carried week after week in the Sunday Times and City Press and I set out my concerns in an article ‘The leak wars’ published on the Media Online website.

What baffled and bewildered me was the Sunday Times claim that SARS was running a brothel. It wasn’t just an outlandish claim, it was a bizarre claim and I subsequently wrote a somewhat whimsical follow-up headlined ‘So where’s the brothel Tom Moyane?’, I concluded that the Sunday Times team headed by editor Phylicia Oppelt had completely lost the plot. They had lost the plot because they had ignored one of the most basic tenets of ethical journalism, ‘When in doubt, leave out.’

Fast forward to 20 September this year and Peter Richer, who resigned as group executive for strategic planning and risk at SARS in May 2015 after the mendacious ‘Rogue Unit’ articles started appearing in the Sunday Times, angrily confronted one of the authors of those articles, Stephan Hofstatter, at a book launch function.

He accused Hofstatter and his Sunday Times colleagues of doing irreparable harm to the lives and reputations of hardworking civil servants and their families and decimating the investigative unit of SARS, once regarded as among the best in the world.

“I lost my job at SARS. You set up scurrilous unethical journalists to set up a fiction to get rid of hard-working civic servants”, Richer said, pointing out that nobody at the Sunday Times had ever contacted him before implicating him in corruption.

At the same function, protestors held up placards accusing Hofstatter of being a ‘State capture crony’.

The denouement came a week later when Judge Frank Kroon, former head of the SARS advisory board whose report gave legal credence to the Sunday Times/Tom Moyane evisceration of SARS, told a clearly surprised Nugent commission that his knowledge of the operational modus operandi of SARS was lacking, that his investigation had been dilatory, his conclusion wrong and that he had apologised to the former head of SARS, Pravin Gordhan.

For Judge Kroon to claim ignorance of what was going on subsequent to Tom Moyane’s appointment as chief tax collector in September 2014 would, in my subjective opinion, be as credible as the claim that Judge Brett Kavanaugh was a virtual teetotaller at high school and university.

I say that because he received two letters, one from Pearlie Joubert and one from Johann van Loggerenberg clarifying the unnerving role that the Sunday Times and one of his board members, Rudolf Mastenbroek were playing in assisting the nefarious endeavours of Tom Moyane and, ultimately, the Zuptas.

While van Loggerenberg received a brusque one-line reply, Joubert’s letter was not even acknowledged by Judge Kroon, let alone responded to.

Concerns in this regard were raised as early as December 2015 by Daily Maverick journalist, Marianne Thamm.

Songezo Zibi, former editor of Business Day has also written about Judge Kroon’s dilatory approach to his responsibilities in this regard and he did not hesitate to call Kroon a ‘disgrace that should not be called a judge’:

Zibi worked on the same floor in the same building as Phylicia Oppelt and her team and he reached the same conclusion that Pearlie Joubert did – the reporting of the Sunday Times team was not ethical and could not be trusted.

I put Natasha Marrian and Franny Rabkin on the story. The former was (and still is) Political Editor at BD, for obvious reasons. The latter was the Law and Constitution Writer – and a lawyer herself. She clerked at the Constitutional Court before becoming a writer.

But the more we stuck to the facts, the more sources at SARS grew, on both sides of the narrative. But then entered Judge Kroon, in my view a disgrace that should not be called a Judge. In his panel was one Rudolf Mastenbroek. He played a dual role.

He was on the panel, on the one hand, but also pushed the ST narrative very strongly on the side. A colleague reported to me an uncomfortable encounter they had with him at a social gathering. Of course the Kroon “report” confirmed the rogue unit narrative too.

Natasha called Judge Kroon and asked him about aspects of his “findings” and how he had conducted the probe. He didn’t once ask the accused to answer questions, did not remember crucial details of his own report etc. It was a disgrace for a judge.

This thread is about my experience of the “SARS rogue unit” story when I was editor of Business Day between 2014 and 2016. Let me also say that the Sunday Times and Business Day newsrooms were opposite one another on the same floor. I walked in there often.

Eye Witness News reporter, Barry Bateman, says that Judge Robert Nugent could not believe what he was hearing when Kroon acknowledged that the investigative unit at SARS was not unlawful and that his findings about this could not be substantiated in law or in practice.

Subsequent to Kroon’s mea culpa, Jacques Pauw wrote that, given the role of the Sunday Times in the damage wrought at SARS, it was imperative for the journalists involved to be called to account by the Nugent commission. His call was echoed by Max du Preez.

Hopefully, that invitation will be extended to Joubert because her evidence will prove salutary and provide future guidance on what went wrong at the Sunday Times.

In April 2016 Tom Moyane and Chief Officer, Jonas Makwakwa threatened to sue the amaBhungane Centre for Investigative Journalism and the Mail & Guardian for defamation. It was an idle threat, an intimidation tactic which predictably came to nought because, as we now know, the Press Council has found the more than 30 ‘Rogue Unit’ articles by the Sunday Times to be devoid of truth.

Moyane has now withdrawn a similar defamation suit against the tax agency’s former spokesman, Adrian Lackay who says that, like all the other SARs employees targeted by the Sunday Times, the cost to him and his family was profound.

As Lackay has pointed out, the toxic legacy of the Sunday Times Fake News campaign against SARS lives on:

“In particular, my former Sars colleagues Ivan Pillay and Johann van Loggerenberg are still being persecuted.

“They still face criminal charges based on the allegations of a ‘rogue unit’, despite such allegations being extensively disproved,”

The word ‘sorry’ never appeared in the newspaper’s subsequent attempt at exculpation but it did print right of reply articles by Ivan Pillay and Johann van Loggerenberg.

Where are they now?

In November 1978 Judge Anton Mostert was applauded for his courage in staring down PW Botha, defying him and blowing the National Party’s Info Scandal wide open.

Forty years later, Judge Frank Kroon, who Songezo Zibi describes as a disgrace to his profession, showed neither the courage nor the principle that saw Anton Mostert become a revered figure in the South African judiciary.

What was common to both events however, was the stellar role that some, but not all elements of the Fourth Estate played as a bulwark of democracy.