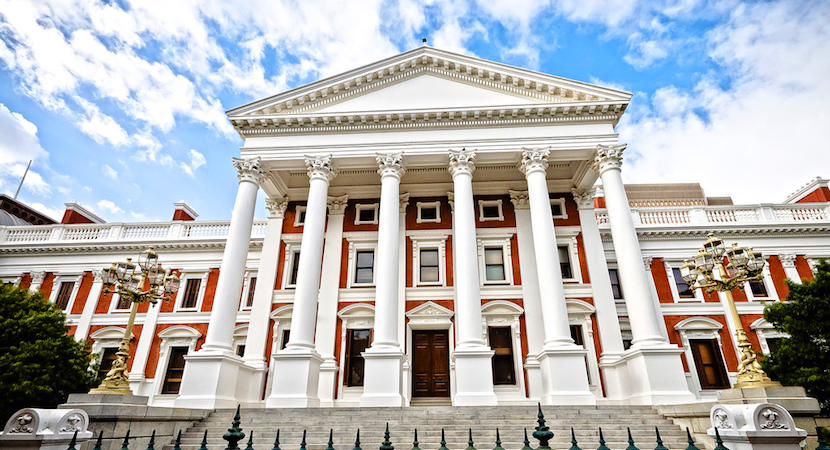 LONDON — Democracy is the best defence society has against the worst excesses of populism, including mob rule. It instils checks and balances to delay emotionally-charged decisions, relying on time to allow cooler heads to prevail. South Africa’s much admired Constitution entrenches this cornerstone of the democratic process. But as the IRR’s Anthea Jeffrey argues so eloquently here, the manner in which Parliamentarians rushed through a proposal to amend the Constitution’s section on Expropriation Without Compensation attacks this very core of the democratic process. The rights of those opposed to the amendment were deliberately shouted down or ignored to promote political ends. Whatever one thinks of EWC, there can be little doubt that the manner in which it has been handled by Parliament establishes a dangerous precedent that those who promoted it could well live to regret. – Alec Hogg

Earlier this week, both the National Assembly and the National Council of Provinces voted in favour of amending the Constitution to allow land expropriation without compensation (EWC).

This is the most important policy decision that Parliament has been called upon to make since the political transition in 1994. Yet on this key issue Parliament has proceeded on a fundamentally flawed basis and without adequate regard to the views of most South Africans.

Parliament has based its EWC decision on a flawed recommendation by the Joint Constitutional Review Committee (the committee). This committee was earlier mandated (by a parliamentary motion adopted in February 2018) to obtain the views of ordinary South Africans and other stakeholders on ‘the necessity of … expropriating land without compensation’ and whether the Constitution should be changed to allow this.

From June to August 2018, the committee held a total of 34 public hearings in all nine provinces on the EWC issue. At these hearings – attended by an estimated 34,000 people in total – most of the individuals given the opportunity to speak (generally for three minutes at most) favoured an EWC constitutional amendment. Relatively few of the people opposed to such a change were given the chance to talk. Those who did speak out against EWC were sometimes shouted down, while others were intimidated, bullied, and even attacked.

The committee also invited the public to send in written submissions. At least 449,500 valid written submissions were sent in, 65% of which opposed an EWC amendment. Having looked at only 400 of these documents – and disregarded 99.9% of the written comments sent in – the committee recommended in mid November that the Constitution should indeed be amended to allow EWC.

It is this flawed recommendation that Parliament has now endorsed, so paving the way for the adoption of a constitutional amendment bill in 2019. Whether this will be done before or after the May election remains uncertain.

In accepting the committee’s defective recommendation, Parliament has breached its constitutional obligation to ‘facilitate public involvement in the legislative and other processes’ of itself and its committees.

According to the Constitutional Court, Parliament cannot shrug off this obligation. Instead, it must give people ‘a reasonable opportunity to know about the issues and to have an adequate say’. It must also give the public ‘a meaningful opportunity to be heard’, which is ‘capable of influencing the decision to be taken’.

The committee has suggested that its timetable was too tight to allow more consideration of the 449,000 (and more) submissions it overlooked. But the Constitutional Court has also made it clear that legislative timetables cannot be allowed to trump constitutional rights. On the contrary, says the court: ‘The timetable must be subordinated to the rights guaranteed in the Constitution, and not the rights to the timetable.’

Some commentators have suggested that it matters little whether the written submissions to the committee were disregarded as the majority of South Africans are in any event in favour of an EWC amendment.

This assertion not only ignores what the Constitution says about public participation in Parliament’s processes, but also contradicts the outcomes of various opinion polls.

In 2016, some 84% of the black respondents canvassed in a comprehensive IRR opinion survey said they would prefer a political party that focuses on ‘faster growth and more jobs’ to one which promises ‘land expropriation for redress’.

In 2017, an opinion survey commissioned by eNCA, in the run-up to the ANC’s Nasrec national conference, found that the majority of some 2,700 self-declared ANC voters wanted the ruling party to embark on ‘more pro-business policies’, rather than pursue ‘radical policies/redistribution’.

Among ANC voters, support for ‘more pro-business policies’ stood at 76% in North West, 67% in the Eastern Cape, 57% in both KwaZulu-Natal and the Northern Cape, 56% in Limpopo, and 50% in Gauteng. Among black voters in general, only 20% endorsed more radical policies.

In August 2018, with the EWC debate in full swing, a further IRR opinion poll found that only 29% of ANC voters supported an EWC policy, whereas 36% of ANC voters opposed it (and 32% had never heard of it).

Moreover, when ANC voters were asked if land should be taken from whites without paying for it, only 36% supported this proposal. By contrast, 15% said land reform was not necessary, while 47% said land reform was needed but should be achieved in other ways – either on the willing-buyer, willing-seller basis (23%) or by distributing state land (24%).

The IRR’s 2018 poll also found that, when people thought about EWC affecting their own property, support for the policy collapsed. Among black voters, 87% opposed the idea that the government could take their own houses or land without paying compensation. Opposition to this idea was higher still (at 89%) among ANC voters and almost as high (at 85%) among EFF voters.

An EWC constitutional amendment has profound implications for the 8m black South Africans who presently own houses (often without formal title deeds), plus the 17m or more black people with informal rights to plots in communal tenure.

Moreover, though the ANC has stressed that EWC will be sparingly applied (raising questions as to why this policy change is needed at all), there is no knowing how far its use will in fact extend once the Constitution has been amended to allow it.

The country’s many cash-strapped municipalities may be particularly keen to boost their coffers by taking land for free and disposing of it at a profit – and black South Africans are unlikely to be immune from this process.

Read also: Ingonyama Trust coining it by keeping subjects serfs on its land

In the Stanger area of KwaZulu-Natal, for instance, Bhekie Dlamini is currently fighting for the return of the 31,350 hectares of land the KwaDukuza Local Municipality expropriated from him, reportedly without his knowledge. The municipality took Mr Dlamini’s land – and also expropriated the property of another 50 residents – because it wanted the area for a housing project.

Once an EWC amendment is in place, many other municipalities battling to bring in enough revenue to cover rising costs will no doubt seek to take land without compensation for housing or other purposes. The millions of black people who currently own homes or plots will pay a heavy price for such takings.

All South Africans, whether they own property or not, will also suffer from an EWC constitutional amendment, which will inevitably undermine confidence, deter investment, limit growth, and worsen joblessness. Moreover, since at least 70% of the land reform projects implemented to date have collapsed, EWC could reduce food production and increase hunger.

Parliament’s EWC decision could also propel South Africa down the same disastrous path as Venezuela. There, expropriation began with the taking of ‘idle’ farm land, but soon moved on to mining, banking, manufacturing, and other sectors. The economy has since collapsed, while hyper-inflation will soon reach the staggering rate of 1.4m percent and at least 3m people (10% of the population) have been forced to flee their homes.

With so much at stake, the public consultation process on a possible EWC amendment should have been exemplary. Instead, it has been badly botched to fit in with the committee’s long-standing determination to recommend an EWC amendment – irrespective of what most South Africans might want.

Public participation on the most important policy issue since 1994 has been a travesty of what the Constitution requires. The legislature should therefore have rejected the committee’s recommendation. Instead, it has endorsed it, with scant regard to its flawed foundation. Now that Parliament has failed to fulfil its constitutional obligation, it is up to the courts to require it to do a proper job.