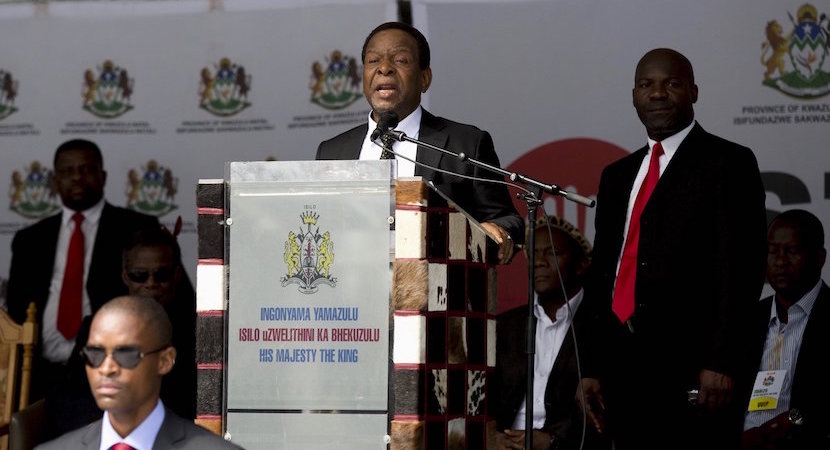 JOHANNESBURG — The Ingonyama Trust should be a tool designed to empower working class people in rural KwaZulu-Natal. Instead, it’s being used to exploit the poor, extract millions of rands out of them and keep them in perpetual economic poverty, as outlined and explained by the Free Market Foundation (FMF) in this article below. Of course, it’s not just the FMF that has observed this – the likes of former President Kgalema Motlanthe has also lashed out at the Trust for failing to translate into property rights for those living in the Zulu Kingdom. – Gareth van Zyl

During the opening of the Provincial House of Traditional Leaders in 2016 in Ulundi, the Zulu King, Goodwill Zwelithini, said that people who live on Ingonyama Trust land would start receiving title deeds. Since then, no further information from the King or the Ingonyama Trust Board has been forthcoming.

Untitled communal land represents dead capital: It cannot be used by the people living on the land as an economic asset since there is no individual ownership that can be transferred or used as collateral to, for example, secure a business startup loan. There are many other deficiencies, too, which inevitably led to a situation where people have “land tenure” but cannot use that land to lift themselves out of poverty. In other words, they have occupation and use of the land, but are still poor — they are vassals.

This is a clear indication that the right to trade something is just as important as the right to use something. Untitled communal land is the property equivalent of massive government infrastructure projects where people are ‘employed’ for a limited amount of time, causing unemployment numbers to drop temporarily, but delivering no sustained growth and no sustained upskilling.

Property rights must thus be fully realised for the owner to increase their wealth and escape poverty. If one does not have full right to own and use property, what is being called a ‘property right’ is a perversion of the term. All other rights hinge on property rights. To restrict someone’s right to use their property as they see fit undermines free human action. And, morally, it is on this point that the entire project of expropriation without compensation falls apart, because it is premised on the concept that the State knows better how people ought to act – better than those individuals themselves.

Permission To Occupy (PTO) certificates are a perfect example of this: You have the right to live, and even build a house, on land, and make other improvements that raise the value. You, however, have no way to realise this increased value, and the direct result of such a perverted incentive is an underdeveloped asset. You also cannot transfer this right to someone else either by selling or subletting the property. This is one of the reasons for the high level of poverty in rural KwaZulu-Natal, despite the theoretical ownership of valuable land by the people under the custodianship of the King and the Ingonyama Trust.

The King and the Ingonyama Trust should heed the lessons of imperial Russia and Ethiopia: feudalism keeps people poor and this poverty makes them amenable to authoritarianism as was the case in Russia with the Bolsheviks and the Derg in Ethiopia. It would be a tragedy if the frustrations of the King’s subjects were exploited by a Marxist-Leninist like Julius Malema; the results would be the same as in Ethiopia and the USSR, that is, even more poverty and starvation.

History has shown that full property ownership is the best way to free the person and community in question from the bonds of poverty. Property rights, and the protection thereof within the framework of a constitution, have proven time and again to aid in the economic growth of countries.

Rather than convert these PTOs to title deeds with full ownership, as the King promised, the Ingonyama Trust has been converting them to leases with rentals. According to City Press, these rentals range from R1,500 to R7,000 per year, depending on the plot size, and brought in more than R106 million for the Trust during the 2016/2017 financial year.

PREMIUM: From the Editor’s Desk: Full-steam ahead on EWC but ANC back-pedals on tribal land reform

The Council for the Advancement of the South African Constitution (CASAC) has brought a case with inhabitants of Ingonyama land against the Trust to stop these lease agreements and to refund the individuals who have been paying rent to date. It is too early to say how the case will go, but it might indicate that the Trust has failed the King’s subjects. Hopefully their rightful property rights will be restored and the lesson will be reinforced that we must never entrust our property in any other authority, be that a king or the government.

This CASAC case could have been avoided if the Trust had implemented the King’s promise. The Upgrading of Land Tenure Rights Act, 1991, provides a framework for the upgrading of lesser titles to full ownership, and has been used by the Free Market Foundation’s Khaya Lam (My Home) Land Reform Project to upgrade municipal leaseholds in townships to title-bearing ownership. The Trust should do likewise, as whatever may be the justification for the lease agreements, there would not have been any land tenure challenge in court if the PTOs had been converted into title deeds.

The court is being asked to decide what between PTOs and lease agreements is a better way to secure the rights of individuals on Ingonyama land. It is a tragedy that the best way to secure these rights under our law — title deeds — is not even under consideration despite the King’s indicating that it would be the preferred option. We hope the Trust does its part in protecting the rights of the King’s subjects. It is well within its power.